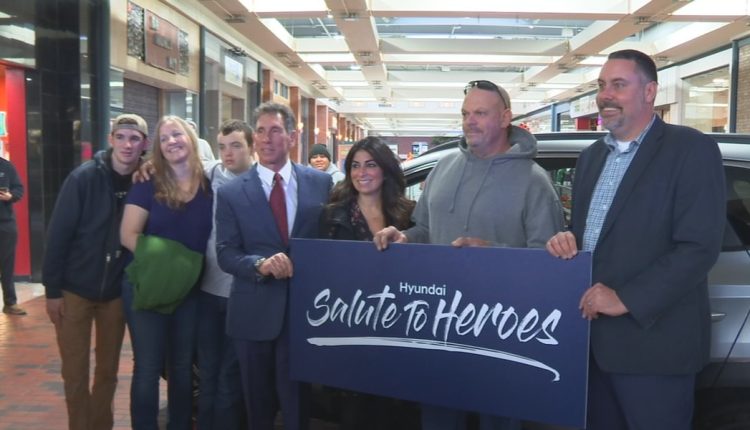 SPRINGFIELD, MA (WGGB/WSHM) – ‘Bob the Bike Man’, a well-known person around the western Massachusetts area for fixing bikes and giving back to those in need, is now the owner of a brand new 2023 Hyundai Tucson, thanks to the Hyundai Salute to Heroes campaign.

Family, friends, members of law enforcement, city leaders, and community members all came together at the Eastfield Mall in Springfield to congratulate Robert Charland, or as many here in community know him, ‘Bob the Bike Man.’

Charland is the founder of Pedal Thru Youth, a non-profit organization that has been giving back over the past five years building and fixing bikes for those in need. Out of the of hundreds of entries, he was selected as the winner of the Hyundai Salute to Heroes campaign, which is put on by the Western Mass. Hyundai Dealers to thank a local hero who makes a difference in the community.

“They picked the right person. He just gives back. He is so selfless and is such an example for other people and he does the next right thing and we are so grateful that we could recognize him and help him,” said Gary Rome, owner of Gary Rome Hyundai.

It was Charland’s wife who nominated him and shared some of the words she wrote about her husband and his work in the community.

“…From donating bikes to those less fortunate to supplying law enforcement agencies around Mass. and Connecticut with backpacks filled with essential supplies for the homeless, but there is so much more to this man. Robert has a terminal brain disease that seems to be at a standstill, which is amazing, but he also has injuries that has taken him out of the workforce, but he continues to push every day and continues to show positivity in what some would call dark times,” Charland’s wife explained.

And those words left many in the crowd with tears in their eyes.

“My eyeliner is going to be running. I couldn’t keep a dry eye. Bob’s family is just a group of amazing people. His wife’s love and honor for him and everything he does was so amazing. It was so nice to hear her read her actual nomination, so touching,” said Carla Cosenzi, president of Country Hyundai.

“Hearing her read the nomination was a little bit of a tearjerker but seeing all the people is wicked cool because it’s not too often that I get to see all of these people all together unless we’re doing a big bike donation,” Bob Charland explained.

However, it wasn’t just his wife who was excited to surprise Charland. His stepson, Vinnie, couldn’t wait to check out their brand-new car.

“Little Vinnie, he’s excited, and his other son just has his license, so maybe he will drive it or won’t drive it, but also the compassion of his wife, having her read the words she sent in to us for the nominee shows the love she has for him and the appreciation she has for what he does every day,” said Brian Houser, general manager of Balise Hyundai.

The new 2023 Hyundai Tucson, which was driven right to Charlan’s storefront in the mall, is entirely covered by the Western Mass. Hyundai dealers. It’s a gift even Springfield’s mayor knows is well deserved.

“The collaborations he’s been able to put forth here with police departments and many other nonprofits, he has given hundreds, if not thousands, to my school kids in Springfield Public Schools. He is salt of the earth, nobody more deserving than him,” said Springfield Mayor Domenic Sarno.

Charland told Western Mass News that this only will encourage him to continue giving back.

“I just want to keep going out every day with the bikes and the backpacks and working with different law enforcement agencies to help people,” Charland said.

The winner of Salute to Heroes will officially be announced on December 12.