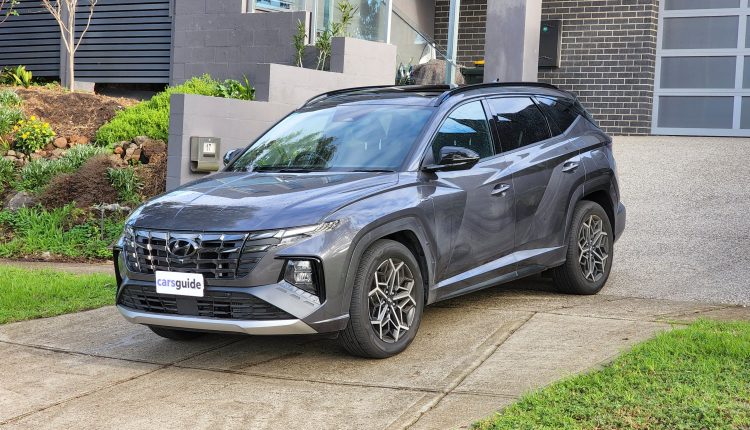 To borrow a phrase from a particular Will Ferrell movie: “Look at all the room for activities!”

This was my immediate thought on picking up the Tucson a few months back, and it’s in the practicality department where the Hyundai mid-size SUV really stands out, especially when juggling an 18-month old.

Read the other long-term review installations

Boot space ranges from 539 liters with the rear seats up, expanding to 1860L with the seats folded.

But how does this compare against the two segment-leading models?

Boot space ranges from 539 liters with the rear seats up (Image: Tung Nguyen).

This means a 542L boot capacity, but thanks to a clever two-level boot floor system, can expand to 580L.

Fold the rear seats and that blows out to 1690L.

But these numbers are academic, and don’t mean much when using a car, so how’s the Tucson stack up to real-world use?

As the longest car of the bunch, with the longest wheelbase, the Hyundai Tucson has superior interior space compared to its rivals.

Sure, the RAV4 has a larger boot (with the seats in place), but the Tucson has a much roomier second row.

In fact, with a baby seat in place, an adult can still comfortably fit into the front passenger seat, with room to spare in both positions.

A clever little feature in the Tucson is having seat controls on the side of the front passenger seat back that is easily accessible by the driver, which means if your partner is loading up the baby and needs some extra room, you don’t have to get out of the car and walk all the way around to adjust the seat position.

And in my time so far with the car, I’ve never been wanting for more room.

In the second row, practicality is this is immensely helped by a flat floor, even for passengers in the middle seat.

But it’s not just the room inside the Tucson that impresses, because there’s also clever storage solutions that help up the practicality factor.

The doors will take on a large bottle, while the wireless smartphone charger and storage tray found just below the climate controls are big enough to accommodate the largest of phones and fattest of wallets.

It also helps that the Tucson does away with the traditional shifter for a button-operated shift-by-wire system that, while a small change, helps open up the center console and make things feel less cluttered.

There are also two generous cupholders in the center console, as well as an under-armrest storage cubby to tuck things out of sight.

So far, I’ve not had to use the latter because things like keys, bottles, phones and wallets all already have a place in the Tucson’s cabin.

Aside from the generous head-, shoulder- and legroom already on offer, the doors will easily accommodate a large bottle, there’s a fold-down armrest with more cupholders and there’s backseat map pockets.

This means baby paraphernalia like milk bottles, dummies, books and toys all have a place to go, rather than on the cabin floor.

And if the in-cabin storage wasn’t enough, there’s always the boot.

The Tucson’s rear end is positively cavernous, and can easily swallow a full-size baby stroller with room for even Aldi groceries packed in a few reused fruit boxes.

And for those trips to the shops that require bags, there are two bag hooks to ensure apples, pears and artisan cheese wheels don’t spill out on the way home.

Truth be told, with a car seat in place, we’ve not folded down the seats to make use of the extra storage space, but we’ve not needed to. Everything we want to fit in the boot has gone straight in.

I’ve got a few trips to Ikea planned in the coming months, but I don’t see any problems with flat-packed furniture and keeping the baby seat in place.

Overall, the 2022 Hyundai Tucson handles family hauling with aplomb, easily able to accommodate the day-to-day needs of a small household without breaking a sweat.

Average fuel consumption for June: 8.1L/100 (measured at the pump)

Police say woman shot, killed boyfriend who was assaulting her in Phoenix