Did you know that Hyundai Tucson was the global best-seller for the company in 2021? Or that Hyundai has thus far sold over seventy lakh units of Tucson since the SUV was first introduced to the world back in 2004? Showcased as a smaller alternative to Santa Fe, it has managed to upstage its elder sibling and continues to rule several key markets across the globe. But while India is a key and very crucial market where Hyundai SUVs have become a common sight, Tucson hasn’t managed to impress anywhere close to as much as Creta and Venue still do. The premium SUV segment – with models between ₹20 lakh and ₹30 lakh – as a whole, isn’t enormous in terms of volumes. But there is potential still and the fourth-generation Hyundai Tucson is raring to fire up the field of play.

Hyundai has taken plenty of time to bring in the newest Tucson to Indian shores. First revealed on September 14 of 2020, the Indian entry has come exactly 695 days after with the official launch this past Wednesday. The 2022 Tucson in India is offered across two variants – Platinum and Signature – and both are available with petrol as well as diesel engine choices.

But while what’s under the hood may be what’s the crux of any vehicle, the latest Tucson is a leap forward in terms of exterior styling, cabin layout and comfort, as well as marks the debut of ADAS or Advanced Driver Assistance Systems in a Hyundai India car model.

The stakes may not be as high as they are in the compact and sub-compact SUV space but with the 2022 Tucson, Hyundai is out to prove a point. What’s that point?

Here’s a comprehensive drive review of the 2022 Hyundai Tucson:

The 2022 Tucson isn’t a facelift because that would have been a tuck here and a nip there. No. Instead, the latest model is a result of some extremely precise modifications and updates to ensure that the fourth-generation model stands far apart from all its preceding models.

The face itself may show how much clout designers have within the Hyundai ecosystem. The parametric grille with the integrated angel-winged LED DRL lighting pattern is the starry highlight of the entire design philosophy. The LED headlight units sit lower down on either side while the front skid plates also add plenty of character.

From the side, the Hyundai Tucson gets updated 18-inch diamond-cut alloy wheel design under moderately large arches. The door handles are in body colour while there are roof rails, shark-fin antenna and a grey chrome addition on top of the window line. 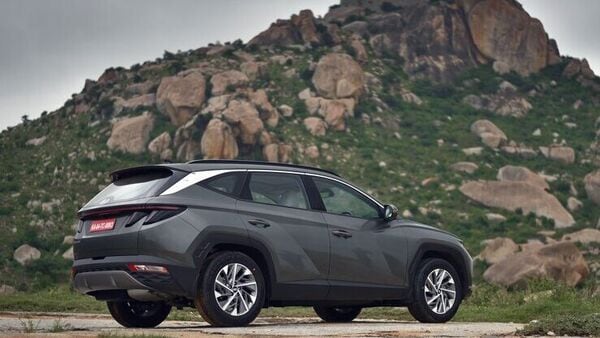 The new Tucson has an extended wheelbase that is evident from the outside but the real benefit comes in cabin space.

Over at the rear, the newest Tucson continues to create its own unique identity courtesy the claw-like LED light signature and the LED connector bar across the boot. The bumper on the lower portion has a sporty pattern to it while the rear wiper is smartly concealed under the protruding spoiler. 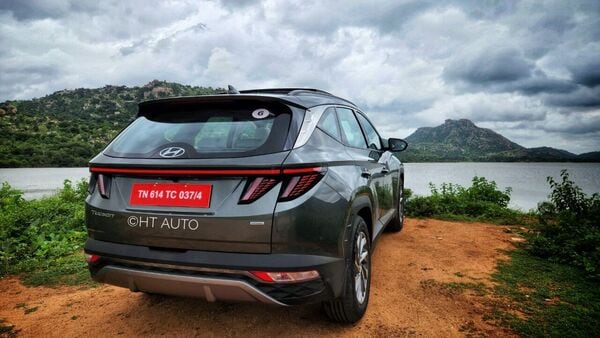 A closer look at the rear profile of the new Hyundai Tucson. And yes, there is a rear wiper blade somewhere up there.

The Tucson may be one of the sportiest looking SUVs in the market but its cabin too has been upgraded and updated to help it take on its rivals. Thanks to a longer wheelbase, there is significant leg space and knee room. The front left seat can also be pushed forward or back by passengers at the back using the easily by accessible side switch. Headroom and shoulder room are also more than adequate while the massive panoramic sunroof and large side windows lend the cabin an airy feel. Under-thigh support at the back, however, could have been better.

Rear-seat passengers also get two USB charging points and rear AC vents on the back of the center console, back incline functionality and a central armrest with cupholders. 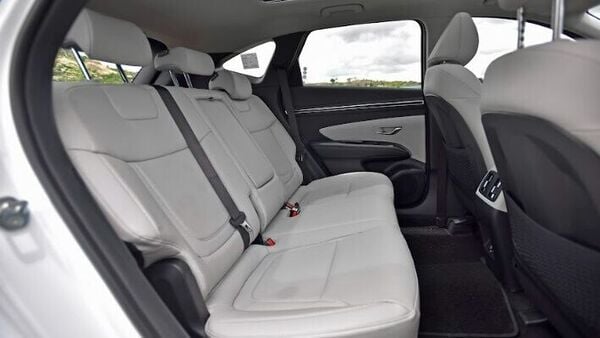 The rear seats are well-appointed and while there are plenty of charging points all around the new Tucson, there is not a single Type-C port anywhere.

But the Tucson isn’t really meant to be a chauffer-driven vehicle and so, there’s much that its owner is likely to like at the front as well. A look at the layout of the Tucson from the rear seats. From top-left: The center console, the steering wheel with mounted controls and the main infotainment screen inside the new Hyundai Tucson.

Hyundai always does a superb job with the display units and the Tucson benefits enormously from it. There is a 10.25-inch main infotainment screen integrated into the dashboard and another 10.25-inch driver analogue-style all-digital driver display. Both screens are quite vivid and while the infotainment unit is typically responsive to touch, the driver display has some neat graphics going for it. The big issue though is that the entire center console – from the infotainment screen to the central armrest – attracts quite a bit of dust and fingerprints wherever there’s the piano black finish. We also noticed that the fitting of the center console in our test unit was extremely flimsy and one solid pull could have yanked it all out. Just to be sure, we checked other units and found it was a one-off. 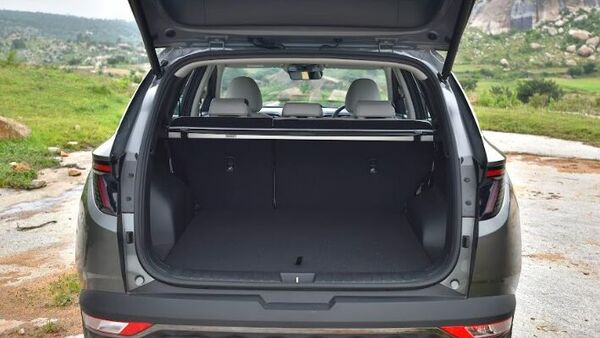 Hyundai Tucson packs a mammoth booth and the 60-40 fold ratio of the rear seats can further expand options.

Overall, the Tucson cabin benefits massively from pleasing hues, comfortable seats, a typically-impressive feature list and a ride height that does justice to its SUV credentials. 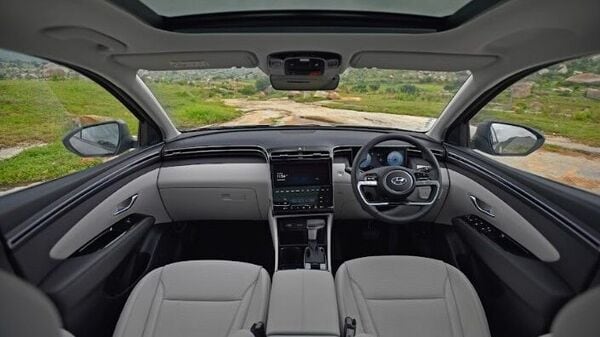 The colour scheme on the upholstery inside Tucson goes a long way in uplifting its premium quotient but could be a tad bit hard to maintain in Indian conditions.

Hyundai Tucson: Driving on its own path

The Tucson continues to be available with both petrol as well as diesel engine options and there still is no manual gearbox as an option. The 2.0-litre petrol motor – the same that powers Alcazar – is mated to a six-speed automatic gearbox while the 2.0-litre diesel motor in our test unit is paired to an eight-speed gearbox. 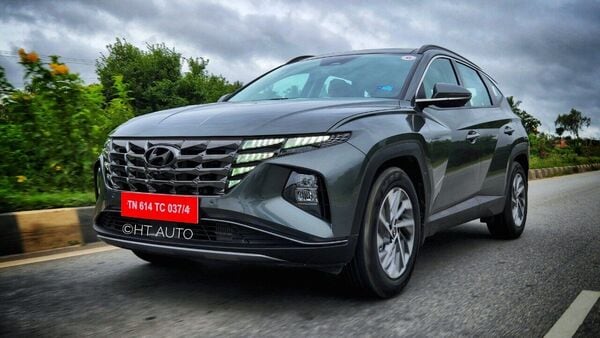 What’s also great is that while Tucson may still be positioned as a city-bred SUV, it gets an all-wheel drive system with multi-terrain modes that include Snow, Mud and Sand. The controls for these are easily accessible from the center console. 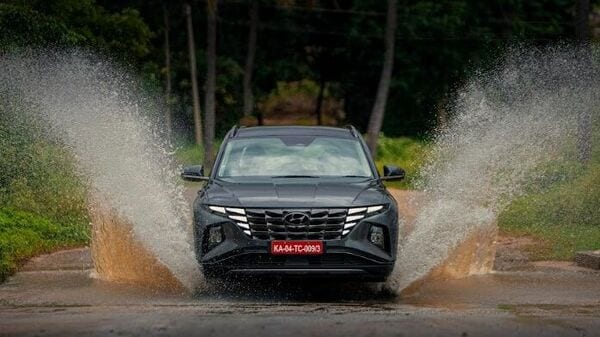 While Tucson was never built for extreme off-road obstacles, it still is quite capable on less-than-perfect road conditions.

On the move, the Tucson’s diesel motor does have a fair bit of grunt on the outside at start. The initial pick up is slightly sluggish but the Tucson quickly settles into a perfect rhythm as it goes past the 50 kmph mark. Throttle inputs are responded to really well by the gearbox that is slick and the upper numbers slot into place effortlessly to provide the SUV the thrust and power it needs. Switch to the Sport mode and all of this becomes even better, but at the potential expense of mileage. 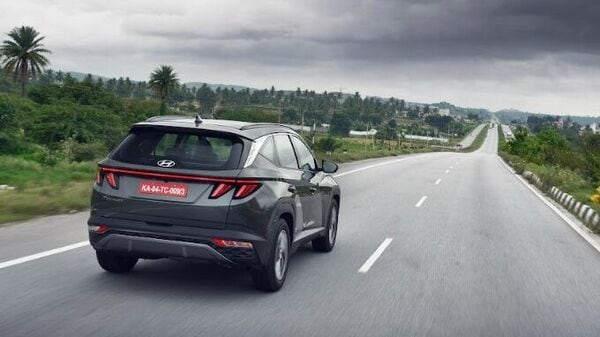 The steering and suspension set up are balanced well to allow Tucson to tackle a wide variety of terrain and drive challenges but control on body roll is something that still lacks a fair bit. The rear passengers are more than likely to be thrown around if the driver decides to play with the Tucson and have it going at near full potential. Personally, I would have also liked for the brakes to have more bite – and this is coming from someone who has always had a Hyundai in his personal garage. 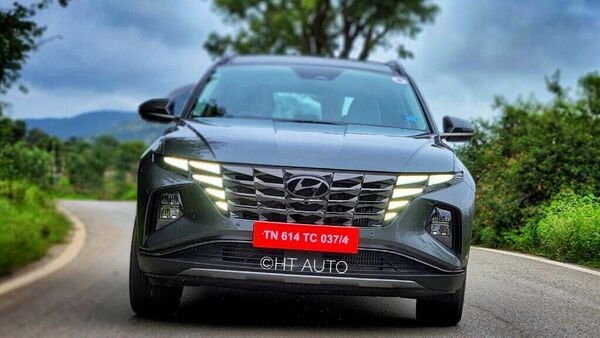 Tucson has a fun drive nature but that may also be a factor that hampers its cornering abilities in terms of body roll.

There is no denying though that Tucson emerges as a confident diesel drive option and plays a good balancing game between offering a relatively plush ride while also being relatively capable on tricky terrain.

The biggest highlight – wheels down – of the new Tucson is the addition of Level 2 ADAS features. Now while ADAS is already being offered by brands like Mahindra and MG Motor India, and therefore isn’t something radically new, it still does lend credible bragging rights to the Tucson in its own segment.

Called SmartSense on the model, Tucson gets as many as 19 ADAS functions. We extensively tested a handful of these. The Forward Collision Warning System, for instance, is extremely precise with its audio-visual (on driver display) warnings and detects cars, bikes, trucks and claims to even detect pedestrians. In case of absolute emergencies, it may also auto slam the brakes to prevent a hit but this last bit, we didn’t take a chance with. 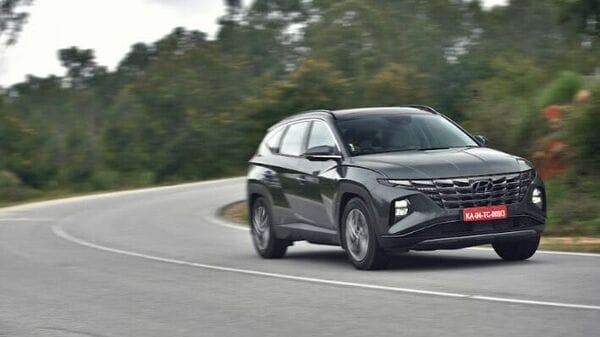 Tucson in action with its ADAS functions turned on.

Then there is the Adaptive Cruise Control that works beautifully too. Set it to follow the vehicle ahead and it auto accelerates to a speed decided by you and if and when there is space. If the car is slowing down, Tucson slows too to ensure a safe gap. If the vehicle ahead stops, the Hyundai will come to a gradual stop as well. And if the moving vehicle departs from its lane, an LVDA or Leading Vehicle Departure alert is issued.

The other features like Lane Keep Assist, Lane Departure Warning, Blind Spot Detection (live feed on driver screen), Blind Spot Collision Avoidance Assist are on point as well. What I particularly liked is if you take off your hands when LKA is active, there is an audio-visual warning reminding you to not do so. After a minute or so, the LKA deactivates in its effort to force you to take control. But when it is deactivating, there’s only a visual message on driver display and there needs to be an audio signal too.

Then there are other highlights like Safe Exit Warning, High-Beam Assist, Driver Attention Warning, among others.

Note – Tucson has a front camera, front radar and rear radar that enables ADAS functionalities. These are only assistive functions and need to be made use of as such. Driver is strongly advised to keep hands on wheel, eyes on road at all times.

The 2022 Hyundai Tucson is a mammoth show of intent from the Koreans and the fact that it enjoys a place on a pedestal for the brand globally shines through amply. Hyundai expects to sell around 5,000 units of the model that comes in via the CKD route.

Overall, the fourth-generation Tucson is entering the territory that’s traditionally been dominated by three-row SUVs and is looking to prove that style, features and performance can be the troika that scripts success.