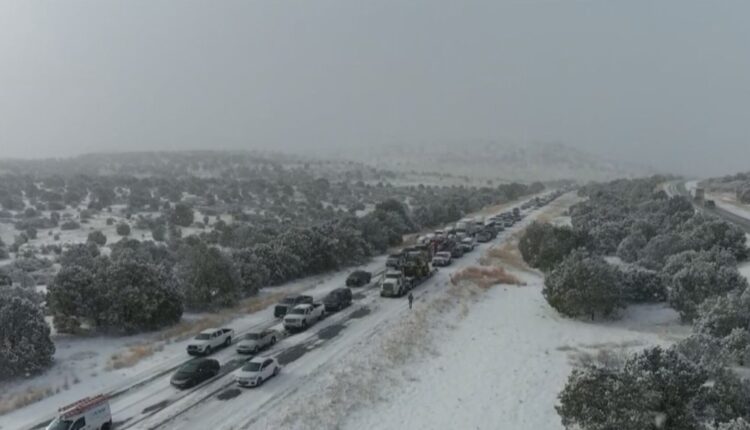 FLAGSTAFF, AZ (3TV/CBS 5/AP) – Interstate 17 is shut down between Cordes Lake and Camp Verde due to dangerous road conditions. The closure comes as another round of wet weather will impact the High Country.

As Arizona’s Family First Alert Weather team forecasted days in advance, a storm system began moving into the Sunday region, bringing colder temperatures to much of the state. The Arizona Department of Transportation said there is no estimated time of when the freeway could reopen. SR-260 is closed between Camp Verde and SR-87. Travelers in Payson cannot head north of SR-87. A portion of SR-64 near the Grand Canyon has been closed for weeks near milepost 242 and milepost 265.

Arizona’s Family News drone was over the scene in Camp Verde as dozens of travelers remained stuck on the highway. A number of people could be seen getting out of their cars and wandering to experience the weather, but authorities warned that people are safer in their cars, not outside. Traffic officials also say to keep an emergency kit in your car at all times, especially when traveling during potentially stormy conditions.

“This storm could drop 4-8 inches of snow in areas above 5,500 feet, like Flagstaff and Pinetop, and 1-3″ below 5,500 feet in areas like Heber and Williams,” First Alert Forecaster Holly Bock reported Sunday night. “Strong winds are also expected with today’s storm. A Wind Advisory is in effect for most of Western Arizona until 5 pm,” First Alert Meteorologist April Warnecke further explained during Good Morning Arizona on Monday.

Such a cold front also prompted the Weather Service to issue a Freeze Watch for much of the Valley and into Pinal County. “Monday will be a cold one, with most areas across the Valley struggling to make it into the 50-degree territory,” Bock said. Early reports came of flurries in Wickenburg, Surprise, and the White Tanks area.

The Associated Press reported Monday’s storm is likely to significantly add to what already is near-record snowfall amounts in Flagstaff for the month of January.

NWS officials said Sunday that the city has had 57.9 inches of snow already so far this month. That’s the fourth-highest amount on record for January, behind only the snowfall totals in 1949 (104.8 inches), 1980 (63.4 inches), and 1979 (59.4 inches). The normal January snowfall for Flagstaff is 20.9 inches. The snowfall data is from the Flagstaff Airport with weather records going back to 1898.

The Associated Press contributed to his report.

Watch: Anti-Abortion Activists Rally in DC in a Watershed Moment for Their Movement