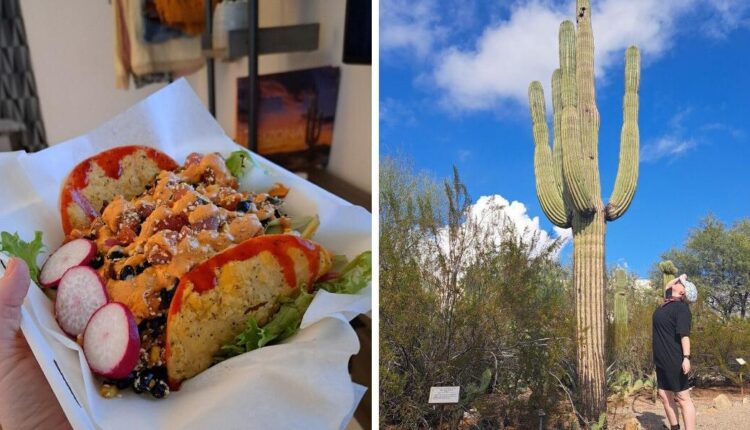 When planning an escape from Canada, it’s hard to ignore just how far away everything is. And until recently, heading to America’s Southwest was about as far as you could go while still on the continent — and it wasn’t cheap.

But, thanks to one Canadian airline, an adventure to the sunny desert city of Tucson, Arizona, just became much easier. You can now fly directly there when you book a flight with Flair Airlines.

I was lucky enough to jump on board Flair’s very first flight from Windsor, Ontario, to Tucson. Not only was it super quick — under five hours with no layovers — but it connected me with a city I was itching to visit.

After eating the cutest and most delicious promotional cookies ever, I settled in with Flair’s in-flight entertainment app and winged my way to warmer weather. As all flights should be, it was comfortable and uneventful.

And, since the whole point of travel is to enjoy your destination, here are the seven things I recommend doing on your first trip to Tucson.

Stay in a boutique hotel

Every good adventure begins with base camp, and the Tuxon Hotel was mine. This bright and modern hotel is obsessed with Tucson, from their locally sourced welcome snacks to their in-house menu packed with southwestern flavors.

The outdoor pool is heated year round, and the light-filled lobby and bar with complimentary coffee was the perfect space to unwind. The hotel also offers free bike hire, so you can pedal your way into the cycle-friendly downtown in minutes.

Every destination has an iconic dish, and the Sonoran hot dog is a must-try when visiting Tucson. In a Sonoran hot dog, the weenie is wrapped in bacon, grilled, and served in a soft and slightly sweet bolillo bun.

I chowed down on a chipilones-style hot dog, with its grilled bun, from the Ruiz food truck on South Sixth Avenue. I also tried the James Beard Award-winning El Güero Canelo hot dog, the bun of which is brought in from Mexico especially.

They were both delicious, but something about eating my Ruiz hot dog in a sun-drenched parking lot while leaning on my desert-dusted car gave it that extra Tucson flavor.

Tucson is an internationally recognized foodie paradise (just ask UNESCO), so be prepared to taste some amazing dishes.

During my stay, I sipped on a prickly-pear shrub while tucking into my huevos rancheros with pulled pork at 5 Points Market & Restaurant. In the Mercado district, I found a great oat-milk latte at Presta and grabbed a glazed donut from La Estrella Mexican bakery.

La Chaiteria made me a life-enhancing Sweet Sunrise juice alongside the best breakfast burrito I’ve ever eaten. I also have to shout out to Robert’s Restaurant— a greasy spoon that served me the chorizo ​​scramble with jalapeño toast and housemade salsa that cured my rental-car-kerfuffle hanger.

My final meal in town was The Braveheart breakfast at The Cup Cafe in the 102-year-old Hotel Congress on Fourth Avenue — a dish of poached eggs, smoked brisket, gravy and crispy potatoes that sustained me until I flew home to Canada from Tucson that night.

Go to the top of Mount Lemmon

Northeast of the city is Mount Lemmon, a 2,792-metre-high peak overlooking the valley. Winding my way along the Catalina Highway, the view just got better the higher I climbed. Eventually, the cactus-filled landscape gave way to pine trees, and it felt like a different world.

When I reached the top, I was delighted to find the Mount Lemmon Cookie Cabin, where I enjoyed a hot slice of pepperoni pizza and a homemade cookie the size of my entire face.

Before I went to either the Tucson Botanical Gardens (TBG) or the Arizona-Sonora Desert Museum (ASDM), my appreciation for the landscape began and ended with: “Look, a cactus!”

Basically an oasis, the winding trails of the TBG take you through secretive gardens boasting an abundance of native flora, from yoga-ball-sized cactuses to towering saguaros. Monarch butterflies freely flutter around, and I even spotted a hummingbird.

At the ASDM, I learned about the fascinating biodiversity of the area — from the bones of the giant sonorasaurus to how a rattlesnake tail makes noise. This mostly outdoor museum is also home to native animals like super-cute prairie dogs, javelina (the pig’s adorable distant cousin) and mountain lions.

Thanks to these must-see spots, I can now say: “Look, a twisted-barrel cactus!”

Tucson’s inspired flavor culture extends to its beverages as well. At Borderlands Brewing, the expert bartenders made me a custom flight that included an unforgettable horchata cream ale and their Las Hermanas brew — an all-women collaboration with their sister brewery in Mexico.

A visit to the Tough Luck Club — a basement bar hidden beneath Reilly’s pizzeria — introduced me to a world of cocktail creation. Special mention goes to the Huckle Bearer: a potent mix of mezcal, tequila and creme de cacao with orange, cinnamon and cola bitters.

I missed trying the mesquite-smoked single malt from Whiskey Del Bac, but there’s always next time. Especially now that it’s so easy to fly to Tucson from Canada.

To the south of the city lies Mission San Xavier del Bac, with its stunning Spanish colonial architecture — parts of which are over 238 years old. The Catholic church here is a gorgeous building that rises, crisp and white, out of the orange, green and blue desert landscape.

I also recommend the Tucson Museum of Art, with its mix of old and new art. On now, the More Than: Expanding Artist Identities From The American West exhibition showcases art by and about people excluded from classic “wild west” stories, like Black cowboys, Queer Indigenous people and women.

Tuscon is a one-of-a-kind destination to travel to, and I’m so glad Flair made it easier for folks in Canada to visit. I barely scratched the surface during my week-long escape, so knowing I can return soon without busting the bank brings me plenty of joy.

Now is an excellent time to visit Tucson too. With such mild weather, it’s the perfect place to take a break from the drama of a Canadian winter and eat delicious food in a thrilling new landscape.

For what it’s worth, I did touch a cactus spine, and it was indeed spikey.

Although products were provided for free in this review, the author’s opinions are genuine and do not reflect the views of Narcity Media.

This article is for general informational purposes only. If you choose to travel internationally, check your destination’s COVID-19 situation and travel requirements before travelling. Countries may have their own entry and exit requirements, including mandatory COVID-19 testing and/or proof of vaccination.