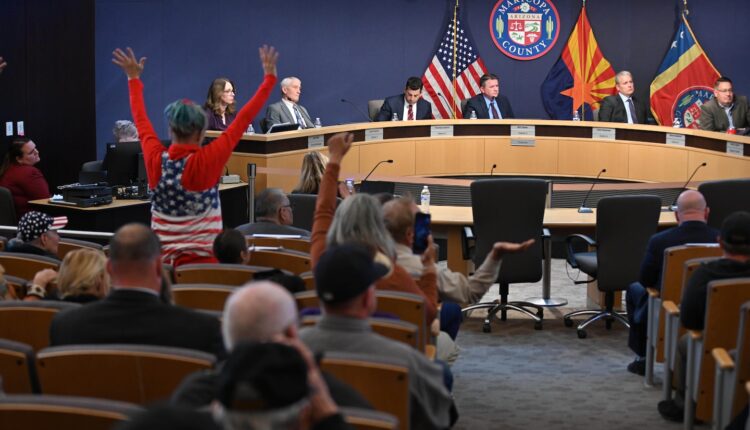 PHOENIX — As elected officials in Arizona’s most populous county met to approve the midterm election results Monday, they were heckled, called “traitors” and told that their handling of voting justified a “violent revolution.” Sheriff’s deputies stood guard in Maricopa County over what used to be a humdrum procedural move.

About 200 miles away, the governing board of a small, ruby-red county in the southeastern corner of Arizona voted 2-1 to delay certification of the results, flouting a deadline set by state law and possibly jeopardizing the state’s timeline for finalizing the results .

In the opposite corner of the state, leaders of another GOP-controlled county contemplated doing the same and adjourned until the afternoon to consider its options but ultimately voted to certify the results.

In Arizona, where problems with ballot printer ink at about a third of Phoenix-area polling places have fueled unproven GOP claims of a stolen election, Monday’s events showcased the depths of distrust in election administration in the state, as well as the willingness of Republican candidates and elected officials to sanction — even stoke — that disturb.

The latest election has intensified skepticism of the democratic process in Arizona, already a hotbed of the election denialism fomented by former president Donald Trump over several years and sustained by his supporters. Earlier this month, voters chose Democrats over Republicans in the most critical contests; the attorney general’s race, in which the Democrat led by 510 votes out of more than 2.5 million cast, was headed to an automatic recount.

Under Arizona law, Monday was the deadline for all counties to complete a process known as canvassing the election — and Republican activists pressured county leaders not to do so.

In 14 of Arizona’s 15 counties, top leaders followed the law and approved the election results. The exception was Cochise County, where the board of supervisors is now locked in a legal fight with the state. There is no precedent for the resulting uncertainty for the state’s process of finalizing the results and ensuring that successful candidates are seated in January.

“We broke the law by not certifying as required by Arizona statutes on elections by Nov. 28,” said Ann English, the lone Democratic supervisor in Cochise County, who dissented from the vote to table consideration of certification until Friday. The two Republican supervisors who backed the delay did not respond to requests for comment. The county’s attorney also did not respond.

Republican leaders in Mohave County, located in the northwest corner of the state, considered doing the same but ultimately followed the law, albeit reluctantly.

“I vote aye under duress,” said the Republican chairman, Ron Gould. “I found out today that I have no choice but to vote aye or I’ll be arrested and charged with a felony.”

Arizona wasn’t the only state that saw scattered efforts to thwart approval of election results. Officials in Pennsylvania’s Luzerne County, who experienced a shortage of ballot paper on Election Day, failed by a 2-2 vote, with one abstention, to meet a Monday deadline for certification.

Cochise County’s decision to blow past the certification deadline drew a lawsuit the same day from Arizona Secretary of State Katie Hobbs (D), who was projected to win her race for governor. Her office planned to ask a court to compel that county to certify the election results. If the county refuses to do so, it throws into question the votes of tens of thousands of people, and possibly the projected victories of Republicans in a US House seat and the statewide race for schools superintendent.

Arizona officials had planned to certify the state’s election results on Dec. 5. Under state law, they can postpone certification until Dec. 8, attorneys said. If Cochise County continues to withhold certification, it’s unclear how votes recorded there will factor into the state’s tally.

Meanwhile, Attorney General Mark Brnovich (R) has not indicated publicly how he will handle the looming deadline for the state to certify the results. Brnovich’s office has suggested that Maricopa County — home to Phoenix and more than half of the state’s voters — may have violated statutory guidelines in its administration of the election because of the widespread problems with ballot printers.

A spokesperson for Brnovich did not respond to multiple inquiries from The Washington Post about how he intends to approach the duty of witnessing certification. A spokesperson for Gov. Doug Ducey (R) has told The Post the governor will “do his job.” A spokesman for Arizona Supreme Court Chief Justice Robert M. Brutinel said the justice “will attend” the state certification ceremony “as the statute requires.”

Kari Lake, the unsuccessful GOP nominee for governor, has refused to concede, pointing to problems with printers in Maricopa County that required voters to wait in line or deposit their ballots in secure drawers. County officials, in a Sunday report responding to the attorney general’s office accusations of possible statutory violations, maintained that the mechanical glitches didn’t block anyone from voting. An Arizona judge came to the same conclusion in denying a request from Republicans to extend voting hours on Election Day.

Lake, a former television news anchor, on Monday shared clips of her supporters condemning Maricopa County officials at the meeting of the board of supervisors. Their request that the board delay certification went unheeded. Its five members, including four Republicans, voted unanimously to approve the election canvases.

The vote capped a remarkable five-hour meeting, in which a large crowd gathered in the hearing room to pray, as well as to taunt the county officials. “You guys represent evil,” one speaker told the county leaders.

In public testimony, residents shared their experiences on Election Day — some as voters and some as poll workers or observers. One man who said he served as a poll worker described problems with electronic check-in books, which he said caused some voters to leave the polling place. A woman who said she worked as a poll observer described hearing secondhand that one of the tabulators at her site had rejected ballots during a test on the eve of the election.

Vitriol aimed at the county board included an allegation that its members had committed “treason punishable by the death penalty.” The woman who lobbed that charge added, in a reference to a 1962 quote from John F. Kennedy, “Those who make peaceful revolution impossible make violent revolution necessary.”

Others invoked Bible verses and a higher power, with one warning the governing board that God would mete out justice in the afterlife. “The Godly shall rejoice in the triumph of the right, they shall walk in the bloodstained fields of slaughtered wicked men,” a woman told the board. “Then, at last, everyone will know that good is rewarded and that there is a God who judges justly.”

Cries of “amen” rose from the crowd. The meeting drew about 200 people, who packed into the board’s auditorium in downtown Phoenix and at times faced warnings that they would be ejected if they continued to interrupt the proceedings with loud outbursts. Some directed their anger at the Maricopa County recorder, Stephen Richer, a Republican responsible for early voting and voter registration whose efforts to instill trust in the system ran headlong into the mechanical glitches. Others aimed at their frustration at the board, which has been at the forefront of efforts to defend the integrity of the county’s elections since Trump made the voting jurisdiction, the second largest in the nation, a target in 2020.

Most of the public left the meeting as the county’s two election directors began their presentation to the board. The directors spent more than an hour responding to false information that spread surrounding the Nov. 8 election.

Scott Jarrett, one of the directors, said problems with printers on Election Day stemmed from ink that was too light to be read by on-site tabulators. Those ballots were instead read by the county’s tabulators in downtown Phoenix.

But the root cause of the problems with the printers, which had been used during the 2022 primary election and during the 2020 cycle, remained a mystery on Monday. One of the only elements that changed during the Nov. 8 election, Jarrett said, was the size of the ballots, which were the longest in county history. To account for the number of races on the two-sided ballots, election officials opted to use 20-inch ballots — an inch longer than the ballots used during the primary election. County officials could have chosen to provide voters with two ballots, but Jarrett said previous use of two ballots had caused voter confusion.

The county has two printer brands and has sequestered almost all of the printers manufactured by Oki, a corporation headquartered in Japan. The county is testing 10 of those printers, and board members have said they will seek an independent review to help determine what went wrong.

As the board moved toward a vote to certify the results, Maricopa County Supervisor Steve Gallardo, the lone Democrat on the board, was visibly exasperated. His voice rising, he accused Lake and her supporters of spreading misinformation on social media about the election and said election workers, under intense pressure from the public, should be commended for their work.

Supervisor Bill Gates, the Republican chair of the board, acknowledged the problems and said the printer glitches did not prevent people from casting ballots. “There’s never been a perfect election and this was not a perfect election,” Gates said. “There were issues, but we were transparent about that. … The votes have been counted accurately.”

Stanley-Becker reports from Washington. Patrick Marley in Madison, Wis., contributed to this report.