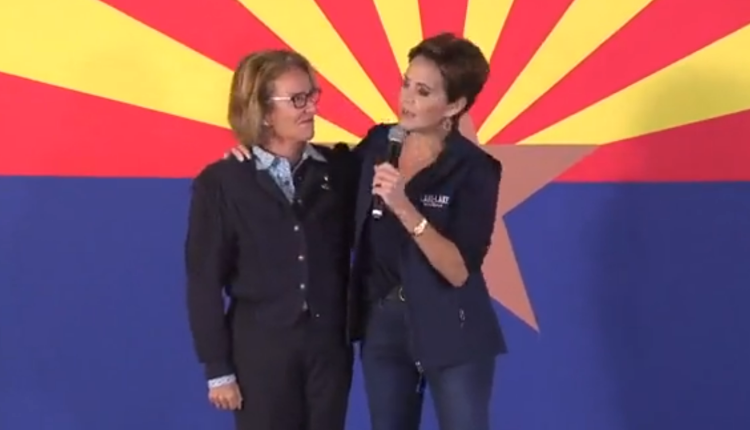 “I love you so much,” Lake said as she embraced state Sen. Wendy Rogers on stage at a Nov. 4 campaign rally.

Rogers has endorsed both Lake and Hamadeh, and in recent days, has been hitting the campaign trail with both statewide candidates.

Rogers has embraced white nationalism, and earlier this year spoke at a white nationalist conference, calling the attendees “patriots” and advocating for the murder of her political enemies.

She has also said she is “honored” to be endorsed by a prominent antisemitic Christian nationalist and regularly trafficks in antisemitic tropes. Rogers has also advocated racist theories, appeared on antisemitic news programs and aligned herself with violent anti-government extremists.

In March, Rogers was censured by the Arizona Senate for threatening her colleagues — but Republican senators balked at punishing her for celebrating white nationalism.

And while Lake has backed away from other endorsements — she denounced an endorsement from Gab founder Andrew Torba and withdrew an endorsement she made of an antisemite in Oklahoma — she has steadfastly refused to distance herself from Rogers.

At her Nov. 4 campaign event, Lake bragged about her close relationship with Rogers.

[email protected]: “We have such an amazing movement. @bgmasters, I don’t want to say he’s like a son to me because I’m not that old. But we’ve become really good friends. And @RealMarkFinchem, @AbrahamHamadeh, we are in this together. We’re in this to save Arizona.” pic.twitter.com/3qrgiVcFbH

Rogers told the crowd that Lake would text her late at night to share words of encouragement.

“She would text me and say, ‘I’m behind you, never give up, you’re over the target, let’s win this,” Rogers said.

Katie Hobbs, the secretary of state and Democratic nominee for governor, blasted Lake’s association with Rogers.

“Kari Lake demeans national heroes like John McCain who served our state diligently all while cozying up to extremists like Wendy Rogers,” she said in a written statement.

“Kari Lake continues to demonstrate she will only represent the extreme factions of her party, those who spew hate and conspiracy theories,” Hobbs added. “While she and her allies continue to destroy and divide Arizona, I’m working with our broad coalition of supporters to defeat her chaos with sanity.”

Hamadeh was a speaker at the same Nov. 4 rally. On Monday, he praised Rogers as “a true friend and the definition of a patriot.”

I’ve known ⁦@WendyRogersAZ⁩ for over a decade, she’s a true friend and the definition of a patriot. Can’t wait to celebrate with you tomorrow! pic.twitter.com/9x5kGggwjz

In June, Hamadeh said that Rogers was “an America First powerhouse” and thanked her for endorsing his bid for AG.

Kris Mayes, the Democratic nominee for AG, slammed Hamadeh for his close relationship with Rogers.

“To see Hamadeh uplift Wendy Rogers is vile, but not surprising, given my opponent’s own anti-Semitic and racist comments he’s made throughout this campaign, as well as those who he’s aligned himself with,” Mayes said in an emailed statement to the Arizona Mirror. “The current GOP is divisive, dangerous and destructive. I have faith that Arizonans will reject this hateful behavior and rhetoric tomorrow so we can begin the process of healing and work to get Arizona, and our country, back on track.”

Neither the Lake nor Hamadeh campaigns responded to multiple requests for comment about the Republican candidates’ allegiance to Rogers.