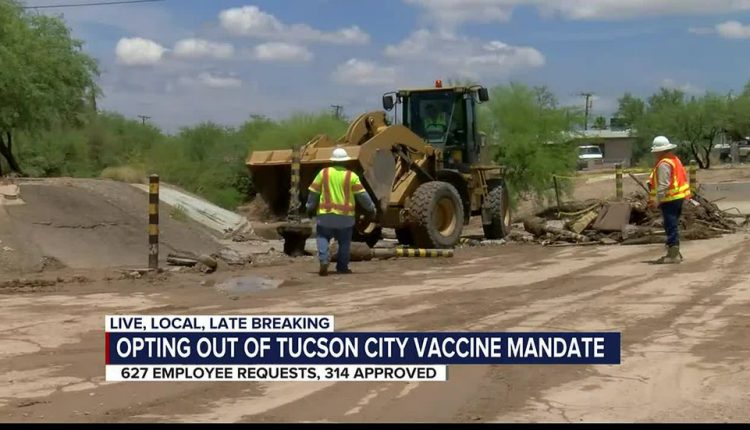 TUCSON, Arizona (KOLD News 13) – The city of Tucson has vaccinated 85 percent of its nearly 4,000 employees. But that leaves another 15% who aren’t, and many of them work with the public.

“If you, as a civil servant, choose to essentially tell the public and staff that it’s my way or the freeway,” said Steve Kozachik, Ward 6 councilor. “Then I’d say take the freeway. “

The city manager’s office released the numbers of how many city workers requested medical or religious exemptions instead of taking the vaccine.

627 workers requested exemptions, but only 317 were granted. And 289 were rejected. Another 24 are being examined.

Much of the filing came from the Tucson Police and Fire Department, the city’s two largest departments.

192 applied for a special permit for the fire brigade. 117 were approved and 65 were rejected. 10 are still pending.

194 applied to the police for a special permit. 100 were accepted and 86 were rejected. Eight are still pending.

To break these numbers down further, the fire department had 100 requests for medical exemptions. 77 were accepted and 17 were rejected. Four are still pending.

Police had 85 requests for religion waiver, of which 67 were approved and 17 were rejected, with one pending.

As for medical requests, the fire department has approved 92 out of 40 and rejected 48, four of which are pending.

For the police, there were 109 requests, of which 33 were accepted, 69 were rejected and seven were pending.

For those who have not received a waiver, according to a memo from Tucson City Manager Michael Ortega, “they have until next Tuesday, October 5th at 5:00 p.m. to get at least their first dose of COVID vaccine and provide proof of vaccination.” .

Failure to do so will be considered a policy violation according to the memo.

With one exception, these workers must wear masks on duty and undergo weekly tests, a program the city will set up next week.

For those who have been rejected, there is a choice to be made.

“If you decide not to follow our guidelines that have passed the law, find another job,” said Kozachik.

The more stringent proposals, a five-day free suspension or a possible termination, were suspended until the final judicial clarification of the mandate issue.

However, they could be revived when the city meets next Tuesday to discuss its options.

“Some of them play chicken with us and see how far we can go,” said Kozachik. “And I think that’s a bad die roll on your part.”