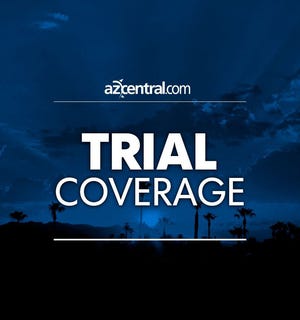 Indiana resident Shawn Terry Spink was found guilty after following his estranged wife to Phoenix, stalking her, sexually assaulting her and attempting to kill her, a Maricopa County jury found on Thursday.

According to court records, Spink was found guilty on all seven counts which included attempted first-degree murder, kidnapping, sexual assault, aggravated assault and unlawful use of means for transportation.

Spink was arrested on Sept. 15, 2018, after he tracked down his estranged wife to Phoenix and attacked her that same day. According to court records, Spink surveyed his wife for several days.

On Sept. 15, as she was leaving her north Phoenix apartment, he sprayed her with Raid bug spray and forced her back into the apartment, records state.

Spink then force a sock in her mouth, used zip ties to restrain her and stabbed her just below her eye before sexually assaulting her, court records state.

He then left the apartment with her. The woman convinced Spink that she should get food at a McDonald’s. Once he arrived at the location, the victim jumped out of the car and ran into the crowded McDonald’s away from Spink, according to court records.

Spink fled the scene and was found in Black Canyon City hours later. In his possession was the knife he stabbed her with, court records state.

Spink will be sentenced on Aug. 1, according to Maricopa County court records.