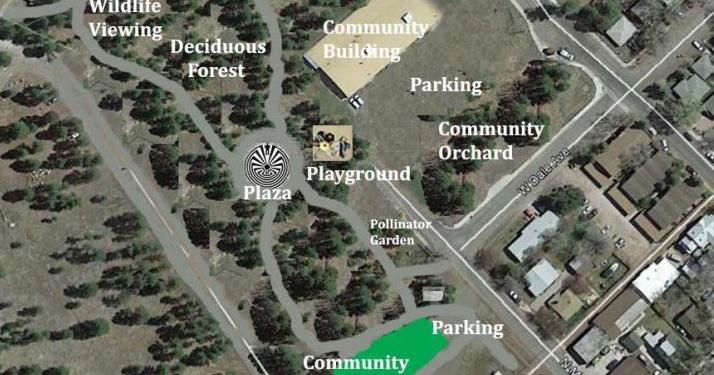 Flagstaff City Council discussed two final concept designs for the Thorpe Park Annex parcel at its most recent meeting, and after a resounding chorus of public input, gave direction to explore designs that would put greater emphasis on the needs of the proposed Indigenous Community and Cultural Center (ICCC).

The ICCC was present in both concept plans presented to council by Southwest Decision Resources (SDR), but both concepts for the 9-acre area also included a dense array of other amenities including pickleball courts, indoor basketball courts, a skate park, a dog parks, parking lots, play areas and community gardens. One of the two concept designs also included seven units of city employee housing.

These final concepts represented the results of a lengthy, highly involved public process, explained Andi Rogers of SDR. This process, which has been taking place for about a year, digested a plethora of public listening and information gathering, including dozens of individual and group interviews, hundreds of registered public comments and surveys with over a thousand responses.

Throughout what was often a contentious process, there was “overwhelming support for an indigenous community and cultural center and traditional ceremony space,” said Carrie Eberly. Both these amenities were included in the final designs.

But when presented in front of the public during Tuesday’s meeting, the designs were deemed too dense to adequately host the well-supported ICCC.

“The Indigenous Circle of Flagstaff (ICF) is pleased that the ICCC has sailed through this project,” said Chris Jocks of the ICF. “I will say, however, that I am very concerned with how many things have been packed into this plan. It seems to me an attempt to please absolutely everybody.”

Jocks said the ICCC was also conceived by the Indigenous community as an amenity “for everyone,” but that the current designs did not adequately represent the interests of plant and animal communities around such a space.

“If their interests were represented, we would see much less of the active, noisy stuff going on here,” Jocks said.

This sentiment was echoed by Robert Breunig of the Museum of Northern Arizona. To him, a space like the ICCC has been “a long time coming.”

“As for the rest of the plan, I have to admit some disappointment,” Breunig said. “I had hoped to see more of nature in this plan.” He advocated for a revision that included “more nature, more native plants, more wildflowers” that “feels like Flagstaff rather than something that seems like a real mishmash over every element one can think of.”

Density is also a concern for Indigenous young people who frequently commute on foot through the area to the nearby Kinlani dorms, said Darrel Marks, an educator at Flagstaff High School.

Marks relayed that based on the conversations he had with his students, they would feel safer if the area was more open and less likely to draw large amounts of traffic. He also noted that they believed less dense use would behoove the function of the ICCC and the traditional ceremony space by creating less conflict between the ICCC and other interests — a dynamic that has led to the demise of other indigenous activities in the history of Flagstaff.

For the ICCC to live up to its promise, it absolutely needs more natural space, said elder Vicki Blackgoat. She spoke to the how the space should allow for communication and quiet contemplation.

“We need to be more generous with the space we assign our plant relatives,” Blackgoat said. She added that the concept plans as presented had her feeling “marginalized.”

“I’ve long been on the margins,” Blackgoat said through the halts of an emotional speech. “I feel like you’re just throwing us in a mishmash, just a pot of facilities and activities that don’t fit anywhere else.”

Rev. Janetta Beaumont, on behalf of the Episcopal Church of Epiphany, said they support the Indigenous community.

Similar words of support were also voiced by Joe Washington and Travis Pinn, and when the long line of public comments subsided, Council took a brief recess to digest the outcry.

“We already have a land acknowledgment,” said councilmember Khara House upon Council’s return. “This seems like an opportunity for real land action.”

From there the conversation steered toward how to best modify the design to accommodate the clear mandate from the indigenous community.

“When I hear the Indigenous community say they feel they’re being marginalized again, we need to listen,” said council member Austin Aslan, who advocated for making the proposed traditional ceremony space as large as possible.

“Apparently pickleball is a very big problem across the US,” McCarthy said. “Maybe we can find a better place for pickleball courts, but right next to this ICCC, its going to be a problem.”

Vice-Mayor Miranda Sweet also voiced support of a “more balanced approach” and requested investigation of the use of vegetation to serve as noise barriers between the ICCC and other proposed amenities.

“This has to be a place for balance, healing, inclusion, restoration,” said council member Regina Salas, who also supported increased space for plant life, including gardens and orchards.

“None of this is funded,” said Mayor Paul Deasy. “The more natural environment that we keep there is not only good for the concerns of the community, it’s also good on the budget.”

While there was general support for the concerns of opening up the space, the conversation got into the weeds of balancing that concern with the interests of other amenities, complexities surrounding parking, the potential for housing in the parcel and general layout of the design, and the discussion veered away from intentional inclusions of open space. Some solutions were directed — most notably the removal of pickleball courts from the project pending their placement in the current dog park area farther to the north, which in turn will be replaced by a similar amenity in the new parcel — but ultimately the discussion culminated in a handful of directives to be incorporated into a new design. Summarized, these directives were “more natural environment, enhance and support ICCC traditional ceremony space, native plant reconciliation, remove pickleball courts and continue to look at employee housing.”

New designs and further discussion will return to city council at the November 15 meeting.