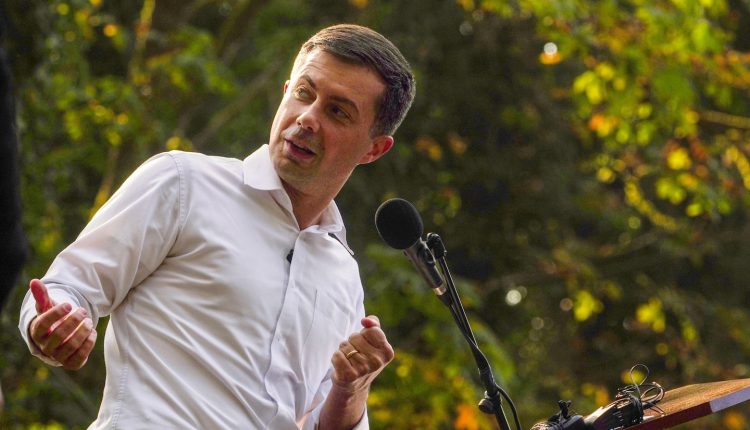 In recent weeks, Transportation Secretary Pete Buttigieg has begun announcing the first major projects to get funding from the $1 trillion infrastructure law.

The package handed Buttigieg and his team $120 billion to invest in projects around the country, an unusually high amount of discretion in a system that tends to leave most transportation decisions to state and local leaders. The US Department of Transportation is prioritizing projects that would improve safety amid a spike in crash deaths, help to reduce carbon emissions and create a fairer transportation system, especially in Black and Hispanic communities that have historically been overlooked.

As infrastructure money flows, Buttigieg’s choices will shape US for generations

Applicants for the money often try to hit several of those objectives, proposing, for example, to overhaul a road in a poor neighborhood in hopes of making it safer for cyclists and pedestrians.

These six projects that recently received funding show the scope of the spending, which is likely to reach thousands of communities nationwide.

What: Revamp 68 miles of rural highway to improve safety and storm resilience and prepare for electric vehicle charging

About the project: Route 1 winds a twisting path along the Maine coast, serving the fishing and lobster industries in the area. The curvy route, combined with high speeds, makes the road dangerous, said Joyce Taylor, the chief engineer at the Maine Department of Transportation.

“Because there aren’t a lot of people, people tend to drive pretty fast,” she said.

Her department is responsible for a sprawling road network, so officials rely on federal grants to make upgrades. That means when the chance comes along, Taylor said the department tries to roll together a host of improvements in one go.

The Downeast project will install new rumble strips and guardrails for safety; wide shoulders to accommodate cyclists; upgrade culverts to help salmon pass and allow storm water to drain; and potentially put in broadband conduits to prepare the route for electric vehicle charging.

“This is a once-in-a-lifetime opportunity when you get one of these grants,” Taylor said.

About the project: Flagstaff grew up around the railroad after the tracks were laid more than a century ago. Today, as many as 100 trains rumble through downtown daily, slowing traffic and cutting neighborhoods off from one another.

Christine Cameron, a project manager in the city government, said local leaders have sought to improve access between the two sides of town for 20 years. With an administration in Washington that has made reconnecting communities a priority, along with the support of the BNSF railroad, she said they finally have the money to do it.

“We were really glad that this bipartisan infra bill was supported and passed to provide this opportunity,” Cameron said.

The project will involve building two new pedestrian underpasses beneath the railroad, creating connections for what Cameron said are areas of “persistent poverty,” modernizing a road underpass and installing pedestrian gates at a pair of at-grade crossings. The money will also add more capacity to the railroad itself.

What: The Metropolitan Atlanta Rapid Transit Authority (MARTA) will purchase 25 electric buses and train workers to operate and maintain them.

About the project: The infrastructure law provided $5.5 billion to help transit agencies transition their fleets to battery- and hydrogen-powered buses, more than six times the previous funding level. MARTA’s project is typical, aiming to get a fleet of battery-powered buses up and running and ensuring that the agency has the workers to maintain them.

The switch to electric buses should cut carbon emissions and reduce other kinds of pollution spewed by diesel engines. But the shift represents a challenge for workers who have spent their careers working to maintain those engines. The infrastructure law allowed federal funds to be used to help with training, and MARTA plans to launch a two-year apprenticeship program and other educational opportunities.

“Even though the technology is different, it’s going to give you training to sustain that and to grow,” said Britt Dunams, president of Amalgamated Transit Union local 732, which represents workers at MARTA.

What: Redesign of a major road to include a bike and pedestrian path, plus storm water management

About the project: Town manager Dustin Anderson said Munster, a suburb of Chicago, grew up in the typical car-centric 20th century fashion. And so on Ridge Road, with its schools and small businesses, he said, the people you might expect to see out walking are mostly absent.

The project aims to change that, taking what’s known as a “complete streets” approach that will redesign the road to slow cars and make it safer and more appealing to pedestrians and people on bikes. The town’s leaders are hoping that will mean safety improvements on a corridor that saw 600 crashes between 2016 and 2020.

The rethink of the road also will coincide with the expansion of a passenger rail connection into Chicago, and is aimed at controlling the rush of storm water during heavy rains.

“Sometimes you’re at-bat and you just connect,” Anderson said. “You have a secretary of transportation who talks about active transport and transit, you have the first rail expansion in 100 years that is adjacent to the project area.”

What: Construction of long-distance bike and pedestrian trail segments in El Paso and a rural part of East Texas

About the project: In both rural East Texas and the El Paso suburbs, leaders see bike trails as a way to connect communities and establish the region as a destination for cycling tourism — blending new transportation infrastructure with recreational opportunities.

“It’s designed to connect these communities together,” said Eric Gleason, the division director for public transportation at the Texas Department of Transportation.

In El Paso, advocates for a 70-mile trail spanning the county have been working for 20 years on the project. Jana Renner, a senior program officer at the Paso del Norte Health Foundation, said that in the past, grants might have covered a short segment of a mile or so, but the infrastructure law has unlocked new opportunities.

“We’re really thrilled that these opportunities are coming through, but there’s still a huge shift that needs to happen to get people biking and walking more and in their car less,” Renner said.

What: Preparing a corridor, which was scarred by protests after the murder of George Floyd, for bus rapid transit service

About the project: The transit agency serving Minneapolis is investing heavily in bus rapid transit, an approach that aims to combine the flexibility of bus service and bring it up to speeds comparable to light rail. But doing that means rethinking streets to ensure buses don’t get caught in traffic.

So on Lake Street — the site of unrest after a police officer murdered George Floyd — Hennepin County is reconfiguring the road to prepare for a new bus rapid transit line and make pedestrian safety improvements, hoping to better connect a community whose struggles laid bare the unequal treatment of black neighborhoods.

“This is really a critical corridor,” said Carla Stueve, the county’s director of transportation project delivery.

Buttigieg visited the area in August on a tour of infrastructure projects across the country, saying the investment in the street was also “an investment in every business along this corridor.”

Phoenix flirts with the 100s