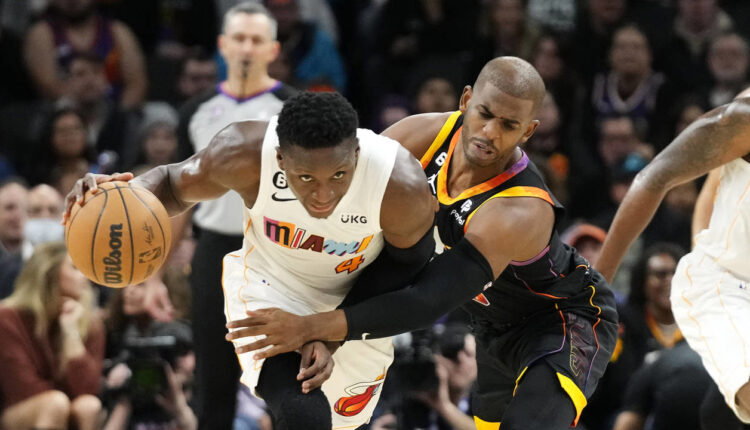 PHOENIX — The Phoenix Suns have more than run out of wiggle room when it comes to the state of a shorthanded roster and they just can’t seem to catch a break on the injury front.

Just when Cam Payne and Landry Shamet returned on Monday, Payne re-injured his right foot on Wednesday and then Chris Paul exited Friday’s 104-96 loss to the Miami Heat due to right hip soreness.

Phoenix is ​​barely built to withstand one significant absence among its three primary ball-handlers in Paul, Payne and Devin Booker (left groin strain), so when two or more are unable to be on the floor, it’s putting the team in a position to failed.

The Suns failed to break 100 points for the third straight game, the first time that’s happened since November 2018, per Stathead. That was the Igor Kokoskov year Phoenix started 4-24 in and ended 19-63.

You can sense how much Phoenix desperately wants to win a game to try to get anything rolling, and now it’s palpable how frustrated they are too.

This was two games in a row of positive effort, a step in the right direction. This group doesn’t want moral victories. They want the real ones.

“Just makes us stay together even more,” forward Mikal Bridges said on the run of losses. “That’s what we got to do. It’s easy when you win to stay together, so our true selves are going to show when we lose. We just keep fighting. You stay together more as a team when you lose, that’s gonna show if you’re a really good team or not and I think we have that.”

“Yeah, we desperate,” Suns center Deandre Ayton said. “We just gotta keep at it. We can come up with a bunch of excuses but next man up mentality.”

Paul has been visibly moving differently this season, which can of course be attributed to his age of 37. But his shooting form has been inconsistent just about all year. He makes routine shots he knocks down in his sleep look arduous on him sometimes, speaking to something else physically going on. And just as it looked like he was starting to get his legs back a bit in the last two weeks, a new setback arrived.

The lead guard asked for a sub with under five minutes remaining in the first half after playing just 12. There wasn’t an obvious play to look back on where Paul hurt himself. He was already in a tough spot after playing 40 minutes in Wednesday’s loss to the Cleveland Cavaliers.

Phoenix lost the game after taking another in the first quarter. A seven-point deficit wasn’t so bad but it continues to the trend the Suns had coming into the night of a league-worst +/- of -65 since their 4-12 stretch began on Dec. 5. It’s now 4-13 and -72.

The Suns were able to hang around in the second quarter and be down just five at halftime. Their energy and physical play transferred over from the discouraging effort in Cleveland. But once Paul wasn’t out there to start the second half, you could sense the momentum was sucked out of them.

The Suns, however, deserve credit for snapping out of that and even getting it down to a two-point game in the tail-end of the third quarter and continuing to compete in the last dozen minutes. They had it at a seven-point Heat lead with under seven minutes remaining until a 7-0 Miami run seemingly closed things out until the Suns managed to make the Heat earn it on the last couple possessions at a six-point game and a minute left.

One of the big issues intertwined in this stretch is the Suns asking for far more out of Ayton and Bridges offensively, a climb up the pecking order ladder neither player has looked particularly ready for despite being in their fifth seasons. To be fair to them, they’ve been supporting cast members and couldn’t have expected to have this much weight on their shoulders at any point this year.

Both of them did not play well on Friday, even though they were productive. Ayton finished with 23 points and 14 rebounds while Bridges ended up at 15 points, four rebounds, seven assists and two steals. Ayton shot 10-of-20 while Bridges was 2-for-10.

They did show some positives through the struggles.

Phoenix was direct in its plan to feature Ayton as the No. 1 of the offense in the first half, and while it was mixed results, it was good to see 1) how much it was forced to him and 2) the intent from Ayton to shoot.

Speaking of intent, Bridges was trying to drive straight through his defender nearly every time he was going to the basket. That’s something he has to get better at, as Bridges is a great slasher and finisher at the rim. Drawing fouls is the next step and a career-high 10-of-10 mark at the foul line was some nice progress.

With that effort in mind, Bridges is right alongside Paul and a few other guys on the team who you can see just aren’t moving right at the moment. Bridges has been clearly playing through something for a few weeks now and you can see him on the court laboring at times.

He denied any type of injury holding him back.

“I’m fine,” Bridges said. “Nothing wrong with my body that’s making me play as poorly as I am, especially on the offensive end. Just me trying to make shots and it’s not going in. That ain’t nothing to do with my body and whatever’s hurting. That’s just me.”

Ayton cut off a question on Bridges’ ability as an ironman to play through injuries by saying he’s seen Bridges play through “everything” and noted Landry Shamet as another Suns player playing through the pain.

Craig is among that group too where you can see something bothering them and he had one of his best games of the season after returning to the starting lineup following a brief one-game move to the bench. He had 17 points to go with nine rebounds on 7-of-11 shooting.

All three of them, however, were not the ones to really pick up the bat and take some swings without Booker, Paul or Payne out there to take shots. Duane Washington Jr. never lets the bat out of his hands.

Washington led the charge in the third quarter that managed to keep the game close, Despite the clear need on the roster for someone like him, unafraid to attack off the dribble with a desire to score, Washington’s playing time has been inconsistent. That can probably be attributed to his defensive play, which is mostly all over the place, to be expected for a 22-year-old in his second NBA season. He was 5-for-18 from the floor with 13 points and seven assists.

Miami was able to play through enough of its core principles to never really have this game in doubt. Its defense was rotating consistently enough and the offense generated good looks for most of the night. It was the type of “fine” performance from a decent team the Suns would normally wear down over time to a comfortable win.

Victor Oladipo led all scorers with 26 points off the bench.