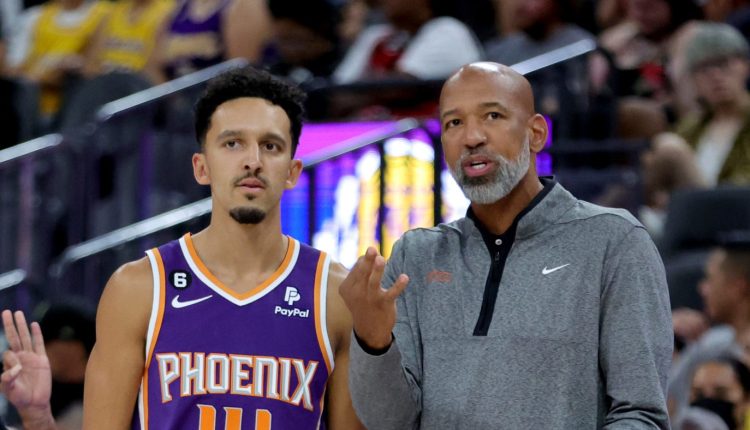 PHOENIX — The good news for the Phoenix Suns on Friday is that the reevaluation point for injuries to forward Cam Johnson (right thumb sprain) and Cam Payne (right finger sprain) is one week, meaning it’s still in the cards for them to be OK by the regular-season opener 12 days later.

While the injuries are less than ideal, another positive to unearth from the situation is that it will allow the Suns to get an extended look at their depth in the two positions that had the most questions coming into the season.

“That’s what the preseason is for,” head coach Monty Williams said Friday about other players getting those opportunities. “You want to be able to get guys conditioning, you want to get a rhythm but you also get a chance to learn a few things about your team.”

Johnson will take on Jae Crowder’s role as the starting power forward, and when it comes to who gets the nod there for Monday’s preseason matchup in Denver against the Nuggets, it’s not an obvious pick.

Big man Dario Saric closed the first half with the starters in Sunday’s victory over the Los Angeles Lakers while wing Torrey Craig started the second half alongside them. There’s also second-year forward Ish Wainright, and in smaller looks, wings Damion Lee and Josh Okogie.

“I think it gives you an opportunity to look at different guys there for sure,” Williams said, noting he wants to see more of Saric at the 4.

Speaking of Okogie, who is limited right now and will be reevaluated on Oct. 14 because of a left hamstring strain, Williams mentioned him when running through the backcourt.

As far as ball-handlers on the bench outside of Payne, there’s two-guard Landry Shamet and two-way guard Duane Washington Jr.

They both took on the responsibilities of running the show when starting point guard Chris Paul wasn’t out there, and as for the minutes when Shamet does it in place of Payne, Williams wants to get a look at how Okogie would look with Shamet.

Williams wouldn’t say if that means Okogie is ahead of schedule and could see some time this preseason but I share Williams’ desire to get a look at that reserve backcourt.

Shamet impressed last year with his overall ability as a defender, where he specifically really shined on the ball in the postseason. He’s cemented himself as a good defender and I wouldn’t look down on any arguments going a level or two above that when describing his talent there.

Okogie arrives in Phoenix after four years with the Minnesota Timberwolves. His athleticism has jumped out to his peers through practices and Shamet called Okogie an “elite defender.”

The swing for that group would be offensively.

Shamet has rarely played as a point guard in the NBA after doing so at Wichita State in college.

“I do think he’s capable of playing both positions,” Williams said.

It’s a part of Shamet’s game where there is clearly some untapped potential I wrote about last year, a breakout that could still come.

Shamet believes that role, one he described as his “nine-to-five” in his collegiate days, is where he’s going to make his mark by the time everything is all said and done.

“It’s comfortable for me,” Shamet said Friday. “It’s fun to step back into that. That’s ultimately what I foresee my career being defined as. Either way, it just comes down to what we need as a team.”

Confidence and aggression have always been the two keys with it, going back to last year at both guard spots. It looked great on Sunday when he scored 21 points.

“The way that he directed the team from a pace standpoint — I didn’t think he got caught up in trying to call 10-12 plays the way that Chris can,” Williams said. “I thought he found the package of plays and he played with pace. It was a huge lift in the second half.”

Williams called this play below the signature one of the game from a pace and space standpoint. You can see how Shamet really pushes it up the court to get into some of the motion and dribble-handoffs that can develop and how everyone on the floor got moving.

Shamet was able to get off seven 3s and hit five of them, including a few off the dribble.

21 points and five 3s for Landry Shamet last night. Suns will need him to be aggressive seeking out his shot with the current second unit. Would be a game-changer for him if off-the-dribble 3s went down more consistently. pic.twitter.com/7yRfPzkIfr

He’s a terrific shooter but has struggled in the past with pull-up 3s. Over his four NBA seasons, Shamet is 87-of-271 (32.1%) on triples off the bounce, a below average number. To be fair, Shamet hasn’t taken many of those in roles like the one he will command in the preseason. And his 33-for-81 (40.7%) mark from his rookie year was a season in which he did get to go on the ball more.

It’s one of the ways in which these minutes will be a benefit to him and the team for two more preseason games.

“It’s a lot of reps,” Shamet said. “Lot of experience in different situations that’ll arise in the next couple games. I’m gonna take it for what it’s worth, I’m excited about it, it’s fun for me, I enjoy it and focus on doing it to the best of my ability.”