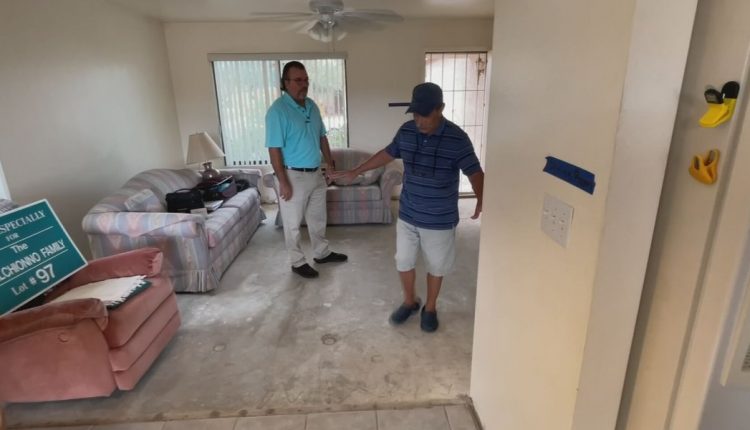 PHOENIX (3TV/CBS 5) — Vince Melchionno says it’s not what his backyard should look like. “This is stuff that I had to remove,” Vince told On Your Side as he showed us around his backyard. “The carpeting, the furniture, the flooring. It’s all out here.” Following a recent flood inside his Phoenix home, Melchionno had to tear out his flooring, baseboards and just about everything else that was soaked inside and take it out. It was an overwhelming task. “I didn’t know how to deal with it. I mean it was a lot to overcome. I was like ‘Uh oh,’ said Melchionno.

Melchionno vacations at his Phoenix home from out of state and visits frequently. But back in June, when he wasn’t around, he got a call from a neighbor who told him there was water seeping out of his house and shut off the main water valve on the side of Melchionno’s home. “Hey, it’s good to have neighbors like that,” On Your Side’s Gary Harper told him. “Yeah, she’s been looking after my property for nine years,” Melchionno replied.

But while Melchionno has a good neighbor, he says he can’t say that about the insurance company. State Farm’s slogan is “Like a good neighbor, State Farm is there.” But Melchionno says the insurance company is not very neighborly at all. Melchionno says after submitting a flood claim to pay for damages for what he believes are more than $20,000, State Farm denied it and Melchionno says he can’t believe the reason why. It has to do with a small crack that developed in one of Melchionno’s toilets while he was away. In the denial letter, State Farm writes, “…damages in your home were caused by a slow leak of water that originated from a crack in the toilet tank located in the hall bathroom. The small crack allowed for water to leak out slowly for an undetermined amount of time… causing mold and wet/dry rot.” They go on to say, “these types of damages are not covered under your homeowner’s policy.”

“Isn’t this why you pay for insurance?” Harper asked. “Absolutely. We’ve been paying on this (State Farm) policy since 1994. The same policy and same agent and we’re in good standing. I’ve never filed a claim with them before,” said Melchionno.

Melchionno says State Farm did pay for three days’ worth of water removal from his home, but when it comes to all the damage left behind, they’re not paying, leaving this Bostonian frustrated. “It’s a crack, not a leak. It’s a crack. Somehow the toilet tank was cracked,” said Melchionno.

On Your Side reached out to State Farm and asked the insurance giant to review Melchionno’s claim again. After they did, State Farm changed its mind and told Melchionno they will cover the damage caused by the flood after all. Melchionno says he sure is glad he contacted On Your Side. “I’m glad Gary Harper got involved because without him, none of this would have happened I know that. I mean it went all the way to Chicago. Whoever was there, over ruled the people down here,” said Melchionno.