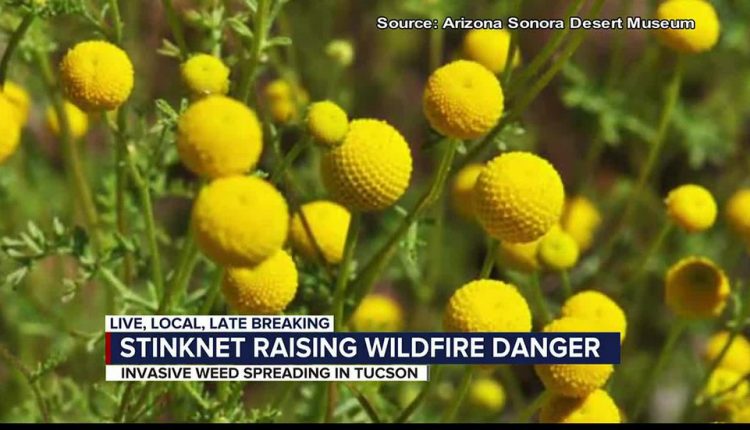 “The real objective in trying to control this weed is to eliminate it before it can make seeds. The earlier you can get to it, the easier it will be to control it,” University of Arizona expert, Michael Chamberland said.

Stinknet, originally from South Africa, has found it’s way to Tucson, and it’s spreading. But how it got here is a mystery.

Chamberland says stinknet has become a problem in Maricopa county, but the seeds are so small they could’ve gotten caught on someone’s hiking gear, vehicle, or clothing and made it’s way to Tucson.

“You do need to be vigilant because the seeds can blow in from neighboring properties or you may inadvertently track them in if you’ve been out hiking where this plant grows,” he said.

It blends in with easily with other desert blooms, but stinknet can be recognized by it’s yellow, button-like flowers and pungent smell. They grow along the road throughout the winter and begin flowering around March.

Because of last year’s active monsoon, we’re likely to see more stinknet this year. Chamberland says this weed poses a number of risks and you want to get rid of it as soon as possible.

“It will definitely compete with our native growing wildflowers. The fire danger is one that will contribute to fire that will burn some of our native, vulnerable plants, especially the cacti and saguaros, the palo verdes. These plants are just not adapted to being in fire,” he explained.

Chamberland says after a stinknet fire, the plants can still grow back. Because the weed is so resilient, it may require repeated manual removal or herbicide treatments. The only thing people can do is control it while it’s small because we may be living with it for a while.

Right now the Tucson Audubon Society is asking for your help tracking the plant. If you think you’ve seen stinknet, you can report it and have it removed. You can find more information here.