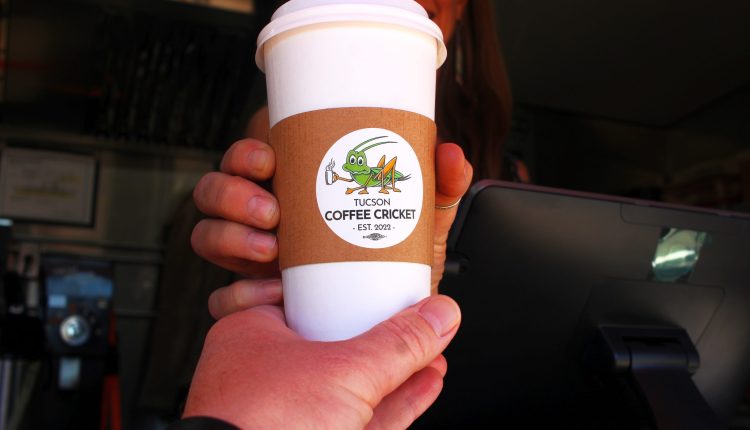 The secret is in the flour

Tucson Coffee Cricket is all about inventive drinks and interesting treats

Folks first stumbled upon Tucson Coffee Cricket a few weeks back. It was its super soft opening and was set up in their very own east side neighborhood. Even with very little advertising, besides some social media exposure, there was an impressive queue waiting to try out this new coffee venture on wheels — one that offers baked treats made with cricket flour.

Now, as a food writer and eater of almost all things, my thoughts on the use of cricket flour is a pure forward-thinking wonder. Bugs, dear reader, could be the future of essential nutrition for us bipedal movers and shakers. It makes a lot of sense because they are here, they are in absolute abundance, and hate to break it to you, most bugs are filled with nutrients you didn’t even know you needed. Plus, like tofu, they just take on the flavor of whatever you season them with.

Cricket flour, on the other hand, is something else.

Hearing this, I just had to sample the goods.

I grabbed their Zucchini Walnut Bread and an Apple Crumb Muffin. Each one, in its own right, was unique and incredibly tasty. Both were similar to eating a pure vegan treat that shouldn’t taste as good as it does because there is no animal product in it.

Tucson Coffee Cricket also carries products from Novia’s Cookies other Cal’s Bake Shopso there are a lot of goodies to choose from on this little red coffee cart.

A collection of drinks worth chirping about

With the “cricket” aspect of Tucson Coffee Cricket sorted and adored, it was time to get acquainted with the middle appellation.

The selection of drinks goes beyond coffee, although I will attest that their straight-up house brew is lovely. Vibrant, not too strong without that weird aftertaste that prevails from those “light blends” people try to convince me to drink. Nice kick, too.

If that kick ye’re seeking has to come replete with some Ghirardelli chocolate, then it’s the Desert Mocha ye seek. This perfect accessory to our beautifully brisk mornings is also made with mesquite flour from our very own Food Conspiracy Co-Op and locally grown chiltepins. So, it’s a caffeine kick with a spicy kick — pow! You’d be down for the count if you weren’t buzzing so hard.

Suzi, along with general manager and head barista Becca Fealk, have mercifully leaped onto the cold brew coffee choo-choo, too. They’re offering us all (are you ready for this?) the Triple C Cold Brew.

No, it is not named after some wrestler. It’s called The Triple C for its use of cardamom, cinnamon, and cloves, making it a triple threat of flavor, rarity, and sheer voltage.

If coffee isn’t your thing, especially from a coffee cart with the word “coffee” in the name, then Tucson Coffee Cricket is there with you in your corner. barista, Max Becker, has concocted the Yerba Mate Palmer, a combination of their homemade lemonade and lemon iced green tea, along with a syrup of yerba mate tea, which has about the same caffeine potency of their house drip. The end result is a refreshing sipper with some serious level-up energy.

Speaking of which, their homemade lemonades are amazing. Bright, tart, and not too sweet, but if you like it sweet then ask for their house honey lavender syrup. If you need to ramp up your lemonade game to the victory fireworks then, for a mere quarter more, you can get your lemonade doused with some sparkles. It’s the holiday season after all so why not make your beverage a potable snow globe? It will make your spirits bright!

“Conception for the Tucson Coffee Cricket started at a family game night,” said Becker. “Becca mentioned that one day she’d love to own a coffee shop and my ears perked up. Becca and I out for coffee, obviously, daydreamed about the ins and outs of making this happen and decided to go for it. Max, my son, came on board a few months later.”

Tucson Coffee Cricket can usually be found at 5028 E. Broadway Blvd. sharing the same lot with a variety of other food trucks — the same arena of Brian and Kelly’s pumpkins and Christmas trees. It’s a bit of a far cry from their humble neighborhood beginnings but having them in the wide open for all to enjoy, especially when shopping for decorated trees propped up merrily in your house, is what Suzi and Becca dreamt about.

I asked Suzi how everything has been going so far while enjoying an Ube Latte (a purple-colored, multi-layered espresso spiked drink made with a violet-hued yam that’s normally used in desserts found in the Philippines).

“It has been wonderful,” she beamed. “We have had great support from other coffee ventures and some Instagram foodies who share photos of the Ube Latte, sparkling lemonades, honey lavender lattes, and more. People are also coming for the delicious baked goods from Novia’s and Cal’s, so we’re so thankful for that partnership to support each other’s businesses. A cookie or concha with a coffee is just the perfect way to start the morning, don’t you think?”

Congress heads back to D.C. for a hectic lame-duck session