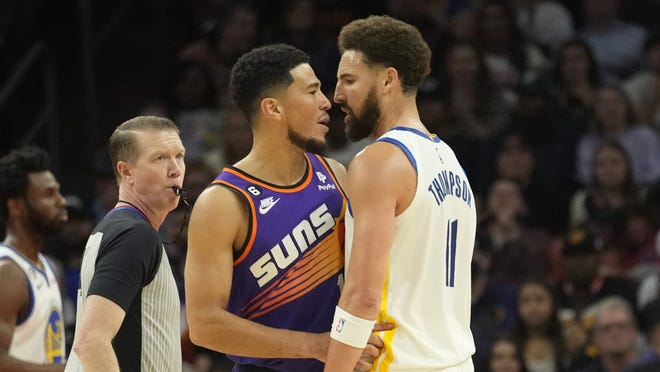 The Phoenix Suns (3-1) will host the New Orleans Pelicans (3-1) Friday at 7 pm, at Footprint Center in the second of a six-game homestand. The game will be televised on ESPN and Bally Sports Arizona.

Is Devin Booker the ‘most complete player’ in the NBA right now?

“There are no weaknesses in his game and he’s scoring everywhere,” William said.

What Williams didn’t mention was Booker’s defense, which continues to improve. He had three steals against the Warriors with one being a backside strip of Draymond Green for a transition dunk.

Making plays like that will draw more attention to his defensive abilities. Offensively, he’s always been able to get buckets at all three levels. Certainly understand Williams’ point, but defending at a high level will put Booker in the “most complete” category like, say, Giannis Antetokounmpo of the Bucks, who gets it done on both ends at the highest level.

Doncic, who scored a game-high 37, missed a 3 at the buzzer.

New Orleans coach Willie Green said before Tuesday’s game he was “optimistic” Williamson and Jones would play the first game of the team’s road trip beginning Friday in Phoenix.

If those three can’t go, the Pelicans clearly will be undermanned, but they just defeated the Mavericks without them. Phoenix had to rally from 22 points down in the second half to pull out a stunner over Dallas in the opener, as Damion Lee hit a game winner with 9.7 seconds left.

What’s crazy is even without Williamson, Ingram and Jones, New Orleans had eight players reach double figures against the Mavs. The Pelicans are for real under the Suns former lead assistant.

Most impressive win: Warriors or Clippers?

The Clippers were playing the second of a back-to-back while the Warriors had just given up 125 points to Sacramento before playing the Suns.

However, the way Phoenix jumped out to an 18-point lead in the first quarter at Los Angeles set the tone for a convincing win.

Yes, the Suns crushed the defending NBA champions by 29, but the Suns never trailed against the Clippers, who have the league’s most talented team.

Another victim found with gunshot wound on 5th street in Yuma