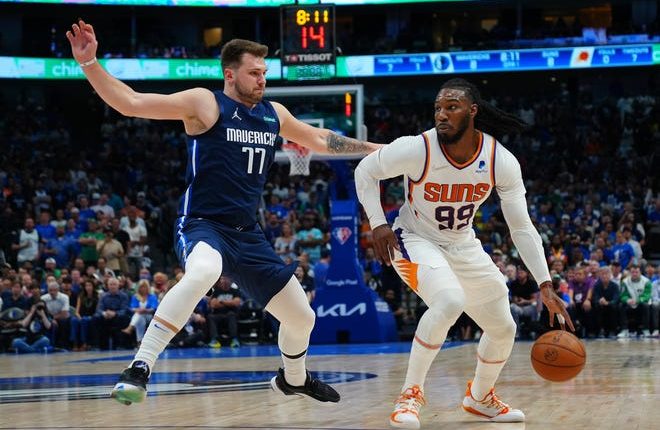 Earlier this week, the Phoenix Suns’ Jae Crowder created quite a stir when he tweeted that “I believe its time for a change” and liked a social media post of himself in a Dallas Mavericks uniform.

Speculation about Crowder’s future with the Suns has swirled ever since.

What did his tweet mean? Could he want out of Phoenix? Does he want to go to the Dallas Mavericks or Miami Heat? Could he be part of a deal for Kevin Durant?

Interestingly, 69% of voters in an azcentral sports poll earlier this week voted that Crowder would not be on the Suns to start the season.

Check out some of the renewed speculation, rumors and trade chatter surrounding the Suns starter since his social media antics earlier this week.

Heat Nation: Could Jae Crowder be an option for the Heat?

Jonathan Sherman writes: “Last season, Crowder started in all 67 regular season games he played in for the Suns. In those games, he averaged 9.4 points, 5.3 rebounds and 1.9 assists per game. He shot 39.9 percent from the field and 34.9 percent from 3-point range. If he were to rejoin the Heat for the 2022-23 campaign, it would be interesting to see what kind of role he’d have with the team. He played in just 20 games for the Heat during the 2019 -20 campaign following a midseason trade. He started in eight of those games. With that in mind, it’s important to note that in that season’s playoff push, which saw the Heat advance all the way to the 2020 NBA Finals, Crowder started in all 21 of his team’s games.”

SB Nation: Could Jae Crowder’s days be numbered with the Suns?

John Voita writes: “Perhaps Crowder knows that his days in Phoenix are numbered and that change is on the horizon as the team looks to change their philosophy at the four. James Jones appears, at least from the outside looking in, to be a transparent GM who communicates his intentions as well as he can to his players. Could change be in the cards for Jae Crowder? Does he know it? The KD Saga continues. Stay tuned.”

Donnie Druin writes: “Crowder’s future with Phoenix has been heavily discussed recently. Many insiders believed Crowder, heading into the final year of his deal, was a trade candidate heading into free agency. If the Suns were able to land Kevin Durant, Crowder is a likely candidate to depart the Valley. Crowder has been with the Suns since 2020, and has helped the team push to new boundaries during his time as a three-and-D player.”

Fadeaway World: Jae Crowder could want to play where he can put up more stats

Ishaan Bhattacharya writes: “Staying on the Suns helps Crowder prove his value to contending teams. On the other hand, he may need to put himself in a position to put up the best numbers he can to ensure he can get another good contract in the league. With the Suns being as competitive as they are, they probably won’t look for Crowder to stuff the stat sheet every night. Many contending teams would love to make a move for Crowder and acquire what he brings to the table as a defensive power forward that can stretch the floor. If the Suns grant his request for a change, it’ll be interesting to see where he ends up.”

Miami Sun Sentinel: Is it time for a Jae Crowder reunion with the Miami Heat?

Ira Winderman writes: “As for the math, Jae is due $10.2 million this coming season on the final year of the three-year contract he signed when he left the Heat in 2020 free agency after helping lead the Heat to the 2020 NBA Finals. And that math simply is not there at the moment unless the Suns were willing to take on Duncan Robinson (who also is a needed chip for a potential bigger deal) or Tyler Herro (which is not happening).In fact, until Victor Oladipo becomes trade eligible at midseason, it would appear the numbers don’t work.Then again, Andy Elisburg does have a crack for making any and all math work.”

Eric Magana writes: “Trade speculation and rumors have surrounded Crowder this offseason, with the forward’s name often coming up in relation to a possible deal for the Brooklyn Nets’ Kevin Durant. Crowder, now 32, is due to make more than $10 million in the upcoming season, the last season of his contract. Since coming into the league in 2013, Jae Crowder has played for seven NBA teams. Along with the Dallas Mavericks and Phoenix Suns, he has also suited up for the Celtics, Cavaliers, Jazz, Grizzlies, and the Heat.”

Tyler Watts writes: “It appears the veteran forwards wants to be traded out of Phoenix. He is set to make $10.2 million next season, and the 6’6 forward will be an unrestricted free agent in the summer of 2023. Crowder played the first two and a half seasons of his NBA career with the Mavs. Could a reunion be ahead? The Dallas Mavericks want to upgrade their roster, but should they target Jae Crowder? Will they actually trade for him? Let us take a closer look.”