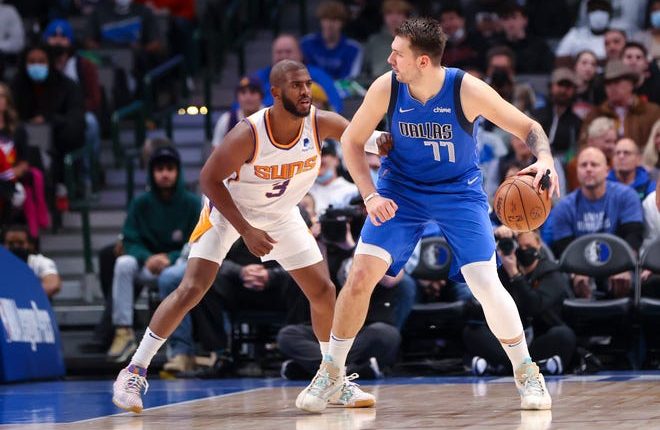 Jason Kidd is a Hall of Famer point guard.

Luka Doncic is one of the best in today’s game.

So the Dallas Mavericks head coach and franchise player are very qualified to address the challenge of facing Chris Paul heading into their Western Conference semifinals series against the Phoenix Suns.

“We could be here all day,” said Kidd during media Zoom availability after Saturday’s practice when asked what makes Paul special.

Paul averaged 22.3 points on 55.2% shooting and 11.3 assists to just 1.5 turnovers in leading the Suns past the New Orleans Pelicans in the first round of the Western Conference playoffs.

Now the fourth-seeded Mavericks will look to slow the 12-time All-Star down in their conference semifinals series against the top overall seed in this year’s postseason.

“You don’t control, you just try to make it tough,” Kidd said. “That’s all you can do. He’s been in the league. He’s seen all the different defenses. You’ve just got to make it tough, and you tip your hat when he makes a tough shot.”

Game 1 is Monday at Footprint Center.

“We’ve really, really got to focus on him,” Doncic said during Saturday’s Zoom media availability. “I think he’s controlling everything on the court. He’s their leader and he’s a hell of a player. We really have to make a great effort to stop him.”

In his last game, the 36-year-old Paul didn’t even miss a shot in scoring 33 points in Phoenix’s Game 6 closeout win Thursday in New Orleans.

Shooting 14-of-14 from the field, Paul made the most shots without a miss ever in an NBA playoff game.

“Just shows what his team needs, he tends to deliver,” said Kidd, who made the NBA’s 75th anniversary team as a player.

Paul averaged 15 points and 13 assists in three games against the Mavs this season the Suns all won.

He scored just seven points on 2-of-12 shooting in the first Suns-Mavs matchup Nov. 17 in Phoenix, but dished out 14 assists.

Two days later, Paul posted a double-double of 18 points and 14 assists against Dallas. He crunches out eight points and six assists in the fourth.

Then in their final matchup back in January, Paul scored 20 points with 10 coming in the fourth and delivered 11 assists in Dallas.

“It’s hard to slow him down,” said Doncic, who talked about playing Paul with physicality. “Like you saw in the last game, he didn’t miss (Game 6 at New Orleans). That was pretty crazy.”

Having played against Paul in Paul’s early years and coached against him more recently, Kidd has seen the Suns’ floor general at different stages in his career.

The fire is far from burning out.

He has a Ph.D., in basketball knowledge.

Paul just continues to get better and better at what he does.

Also voted to the NBA’s 75th anniversary team, Paul became the first player in NBA history to be part of four different teams to set franchise records for wins a single season.

“Amazing man, he’s a Hall of Famer,” Doncic said. “He’s made every team better that he was on.”

Paul led Oklahoma City to the playoffs in his one season with the Thunder in 2019-20.

The Suns then traded for Paul for the 2020-21 season after having not made the playoffs since 2010.

Paul proved to be the missing piece as the Suns not only posted the second-best record in the league that season in returning to the postseason, but they reached the NBA Finals for only the third time in franchise history.

Phoenix finished this season with the NBA’s best record and have advanced to the second round after eliminating the eighth-seeded Pelicans in six games.

Booker didn’t play in three of those games with a strained right hamstring, but Paul did more than his part to help the Suns win the best-of-7 series.

This Instagram Page Sarcastically Sums Up The Reality Of Being A Mom, And Here Are 56 Of The Most Hilarious Posts