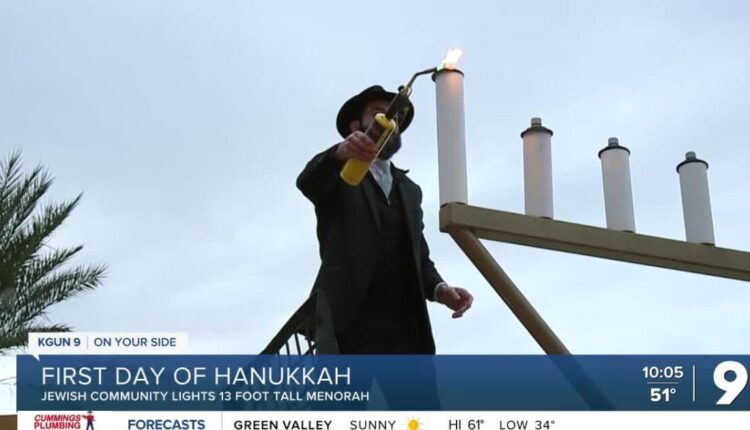 It wasn’t something she thought she would ever be doing 15 years ago when she wasn’t religious at all. She grew up a part of another religion but stopped being religious years later before converting to Judaism.

Now she can’t imagine a life without God.

“It was like transformational for me. I knew that if I was going to embrace any religion, it was going to be this,” Desopo said.

Rabbi Yehuda Ceitlin from Chabad Tucson was the one who lit the menorah. He said it’s the tallest menorah in Tucson and for him, it’s a symbol of giving.

“We take it as whenever someone does something good, it should always increase in doing more. It should never stay the same,” Rabbi Ceitlin said.

Ceitlin said when the Jewish people took back the holy temple in Jerusalem, there was only enough oil for one day, but it lasted for 8. He said that’s why they have 8 days of Hanukkah and 8 candles on the menorah.

He said the ninth candle is an assistant branch that lights the rest of the candles, and said it symbolizes so much more.

“In life we ​​could always be a supportive person, a supportive hand to people that are in need,” Rabbi Ceitlin said.

But for Desopo, Hanukkah is a symbol of her religious journey.

“It’s that belonging that is so meaningful in Judaism that I really love so much,” she said.