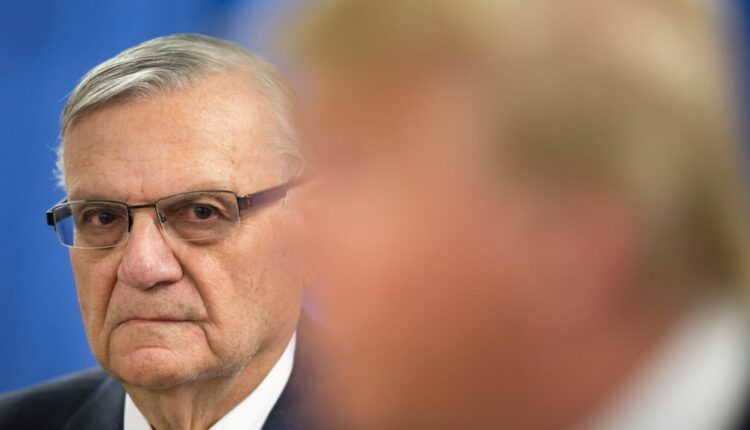 Street signs and a doormat posted outside former Maricopa County Sheriff Joe Arpaio’s office refer to him as “Sheriff Joe.”

He hasn’t held the position in six years, but he still sometimes slips into the present tense.

“I am the sheriff for this county,” Arpaio said in an October interview, before switching back to speaking about his former job in the past tense.

During the 26 years he did serve as Maricopa County sheriff, he made a name for himself nationally with stunts that critics called cruel and inhumane, like forcing prisoners to dress in pink underwear and eat moldy food. He also was convicted of contempt of court for ignoring a judge’s order that required his department to stop racially profiling Latinos. In 2017, then-President Donald Trump bailed him out with a presidential pardon.

Since then, Arpaio has all but lost his political relevance. He ran for mayor this year in Fountain Hills, a sleepy Phoenix suburb. It was his third consecutive bid for elected office since he lost his sheriff seat in 2016.

And he lost again — even though his campaign spent 100 times more than his opponent.

But Sheriff Joe, now 90, hasn’t lost everything. Some say he has had an outsized influence on the hearts and minds of his cop colleagues – an influence that may have helped fuel a threat to democracy.

After using his cowboy charisma and racist stunts to catapult himself into celebrityhood, Arpaio used his platform to elevate the constitutional sheriff movement, an ideology that maintains sheriffs are the top cops in their counties — even above the federal government.

U.S. sheriffs, particularly in Western states, have a history of anti-government and right-wing activism.

But some experts say Arpaio’s prominence helped bring into the mainstream a radical ideology: that county sheriffs have supreme authority in their jurisdictions. The belief that a county sheriff has the final trump card over federal law enforcement has a name — and an organization for card-carrying members – the Constitutional Sheriffs and Peace Officers Association.

Constitutional sheriffs’ beliefs are a rebranding of the 1970’s far-right Posse Comitatus movement — a violent anti-government group ridden with racism and anti-semitism.

Experts like Rachel Carroll Rivas, a researcher at the Southern Poverty Law Center, say sheriffs’ adherence to this ideology is a threat to democracy. The ideology has become more common in recent years, Rivas said, and Arizona in particular has become “ground zero” for the movement, experts told the Arizona Center for Investigative Reporting.

Constitutional sheriffs’ ideology raises questions about “who can defy the laws of the land,” Rivas said.

“These are law enforcement officers who are not following the law themselves, and that’s incredibly dangerous to the people in our communities, [and] also to democracy as a whole.”

Over the years, the constitutional sheriff movement has enjoyed a number of “celebrity sheriffs” who have helped popularize the ideology, said Rivas. Arpaio was the first, building a nationwide following in a pre-social media era.

“Historically, one of the people that raised their profile more than many others was actually Sheriff Joe Arpaio in Arizona,” Rivas said. “He was sort of the hero of the sheriff’s movement.”

Arpaio was successful “in part because he combined two key elements of the hard right – both this kind of anti-government sheriff supremacy idea, false idea, and anti-immigrant sentiment and the targeting of immigrants,” she said.

Arpaio supported the constitutional sheriff movement during his own tenure; Rivas said he worked “hand in hand” with CSPOA leader Richard Mack in the early days of the organization. Not only did the duo work together closely, but Arpaio’s face also is printed on the back of CSPOA propaganda.

In 2009, Mack published a 50-page pamphlet outlining the organization’s ideology. Arpaio’s picture is on the back cover of the booklet.

And so are his words.

“The sheriff is indeed the ultimate law enforcement authority in his county and in this country,” Arpaio’s statement on the booklet reads.

“This book should be read by every citizen, police officer, and especially each sheriff of these United States,” he continued.

Despite the booklet, and despite the fact that he’s a dues-paying member of the organization, Arpaio denies that he ever supported the movement. Neither does he want credit for elevating the organization’s profile. Instead, he refers to himself as a “lone ranger.”

“I’ve never called myself a constitutional sheriff,” he said. “You will never hear me say that.”

“I do what I feel. I don’t need any groups to tell me — bureaucratic groups or political groups — what to do,” he added. “I do what I feel is right for the people in this county.”

Arpaio goes further: He said he’s not friends with other sheriffs, either. When asked if there are fellow lawmen he looks up to, he said, “Not really.” He said he has distanced himself from the movement and that he no longer gives speeches for the CSPOA.

Yet, when he talks about the role of a sheriff, he describes that very ideology: to him, the sheriff is the top cop in the county, even above the feds. And he stops well short of denouncing the constitutional sheriff ideology, movement or organization.

In the past, he has publicly supported the group. Almost a decade ago, Arpaio and almost 500 other sheriffs announced they wouldn’t follow any federal laws that asked them to confiscate guns from private citizens. In other words, they declared they would cherry pick what laws to enforce.

Rivas said that Trump legitimized Arpaio’s authority over the feds by granting him a presidential pardon in 2017.

“Trump’s pardoning of our Arpaio was one of the victories of the hard right movement in the U.S. — and particularly the anti-government movement and the anti-immigrant movement,” she said. “It was absolutely sort of a further legitimizing of some really dangerous ideas about who can defy the laws of the land.”

The organization’s ranks appear to have swelled since Arpaio left office — though it’s hard to measure, according to Jessica Pishko, a former attorney, researcher and author of “The Highest Law in the Land,” an upcoming book about sheriffs.

Last year, the CSPOA told The Washington Post that around 10% of US sheriffs are members of the organization.

Even though Arpaio didn’t start the movement, he showed fellow lawmen and the rest of the country a “template of what sheriffs can get away with,” Pishko said.

He showed other sheriffs — and the public — that “you could break all the laws and apparently not suffer any consequences for it,” she said.

But one aspect of Arpaio’s legacy has been missing from public discourse, according to Pishko.

“The entire political apparatus … fails to reckon with the fact that they can hold actors accountable,” she said.

“Why is it that he was elected so many times and nobody — it didn’t occur to anybody to do anything to stop what he was doing for so long?”

Arizona and the feds haven’t taken the steps to prevent another Arpaio, she said.

Though he has been out of office for years now, the former sheriff is hoping his posse of fans don’t forget him — and he has taken steps to make sure they don’t.

Not many cops write multiple books about themselves — even after leaving office — or sell pink boxers emblazoned with their autographs.

Arpaio does. In an interview earlier this month, he boasted that Robert Mueller, the former head of the FBI, has one of his autographed boxers.

“Everybody forgets you. You know?” Arpaio said.