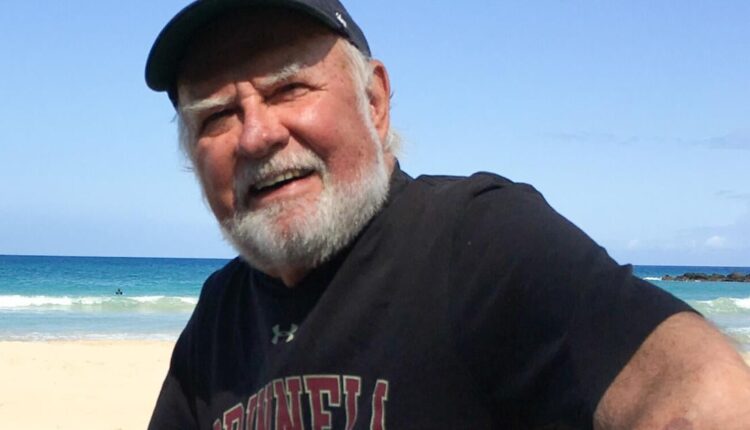 Joe Walka, a 37 year member of the Flagstaff community, died at home on November 22, 2022. Joe brought his family – his wife Ann and two sons, Pete and Jesse – to Flagstaff in 1985 when he joined the NAU College of Business. Initially the founding director of the Center for American Indian Economic Development, Joe served as dean of NAU’s College of Business from 1987 to 1996, the longest tenure of anyone in that position. At his death he was Professor of Economics and Dean Emeritus of the College of Business.

Joe loved the extracurricular activities Flagstaff and the Colorado Plateau had to offer from camping and river trips with his family to NAU sporting events. One favorite local adventure was paddling a flooding Rio de Flag from below MNA through Wheeler Park, under Route 66 and Factory 2U, meeting daylight again behind Macy’s Coffee House. He also delighted in rowing rafts on the San Juan River near the little house his son Jesse built in Bluff, UT.

An avid supporter of NAU athletics, Joe was a member of the Sky Jacks, a season ticket holder for basketball and football, and an enthusiastic tailgate participant at football games. For years he was also a proud, and often injured, member of the COBRAs, College of Business friends who competed in city league sports.

For thirty years Joe and another group of friends joked their way through a monthly game of poker. On hundreds of Thursday afternoons he played bridge at the Joe Montoya Community Center as well as playing online and in tournaments throughout the Southwest.

Born on September 19, 1938, Joe grew up in St Louis and spent summers in Kansas where his father coached a farm team for the St. Louis Cardinals. At Grinnell College in Iowa he majored in English and edited his college paper, the Scarlet and Black. After his graduation and his marriage to Ann, Joe earned his MBA from the University of Indiana. Following his major professor to Washington DC, he became the Assistant to the Chairman of the Council of Economic Advisors under Presidents Kennedy and Johnson. In 1965 Harvard’s Kennedy School offered him a chance to reflect upon his work in DC, and Joe and Ann moved to Cambridge, Massachusetts, where Joe earned his MPA and PhD in Political Economy and Government.

They came west to Tucson in 1968 where Joe taught Economics at the University of Arizona. Pete and Jesse were born in Tucson, where Joe and his family camped and hiked and fell in love with the Sonoran Desert. A move to Idaho State University in Pocatello, Idaho, in 1981, introduced them to a community of river runners, naturalists and artists for four years of outdoor fun and adventure. Flagstaff beckoned though and in 1985 they returned to Arizona.

Joe enjoyed making connections and had a wide circle of friends and acquaintances. Above all he loved spending time with his sons and their families. His goofy sense of humor, his shaggy dog ​​stories, his knowledge are sorely missed. As a dear friend wrote to Joe on his last days ‘Your undeniable intelligence mixed with humility, wit, corny sense of humor and storytelling snag the rest of us hook, line and sinker.’ A party going away will be held for him in the spring.