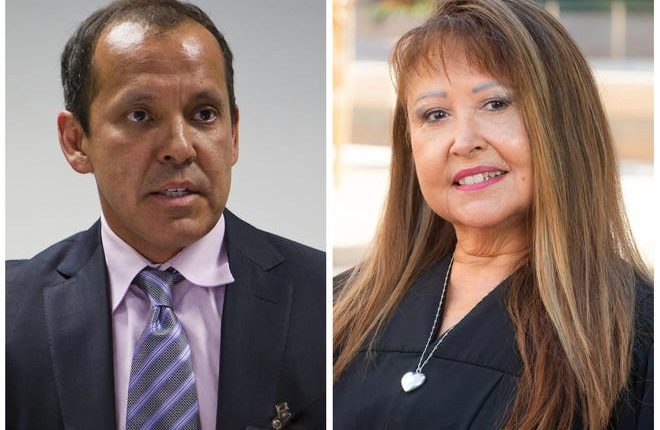 A justice of the peace contest that was so tight it triggered an automatic recount was finalized Tuesday in Maricopa County Superior Court, but more legal challenges may come.

Judge Randall Warner reviewed the automatic recount that confirmed the initial results. By three votes, the tally shows incumbent Teresa Lopez holding onto her justice of the peace post at West McDowell Justice Court in Phoenix in the Aug. 2 Democratic primary election.

State law outlines when an automatic recount is triggered. For the West McDowell JP contest, it had to fall within a five-vote margin, election officials said.

The county’s Elections Department reprogrammed its ballot reading equipment to only tally votes in the JP race during the recount. A logic and accuracy test took place before all 866,924 ballots were reprocessed.

But Lopez’s opponent, State Rep. Robert Meza, is contending that four additional early ballots that the Elections Department was unable to verify signature should be counted. He filed a motion in the recount case asking Warner to consider the issue before certifying the results of the contest.

Warner declined to rule on that motion Tuesday, saying the recount isn’t the “proper vehicle” to raise concerns about the signature curing process.

“I do believe that any recount hearing like this is not the appropriate venue for an evidentiary hearing,” Warner said.

Although Warner certified the results of the race, Meza and his legal team can still appeal the motion or file a separate lawsuit.

The Arizona Republic could not immediately reach Meza for comment on Tuesday.

Lopez said she is glad to hear the recount confirmed the results of the race, but she isn’t celebrating yet.

“I know I hold my breath because you never know,” Lopez said. “You just never know about these matters.”

Meza’s motion argues that the four votes in question should be counted because his team was able to get in touch with each of the voters and confirm they signed and cast the early ballots, According to his attorney, Tim Nelson.

At the heart of the matter, Nelson said, is the question of whether the county made “reasonable and meaningful efforts” to contact those voters and alert them that elections staff had questions about their signatures.

“In each of the four instances, the voters have been contacted and have signed affidavits confirming that it was their signature, that was their ballot,” Nelson said. “The issue is whether those ballots could still be counted and whether the county has met it’s burden.”

If elections staff are unsure that a voter’s signature matches with other signatures on file, a manager will review all of the signature samples that the Elections Department has for that person.

If they determine the signature does not match, a specialized team at the Elections Department attempts to cure the signature by contacting the voter to make sure they signed the affidavit. State law stipulates that the voter has five business days after the election to respond. Otherwise, their ballot cannot be counted.

If no further legal challenge, Lopez will serve second term

No Republican candidates ran for the JP seat in West McDowell, which means Lopez will return to the bench unless further challenges alter that.

JPs preside over limited-jurisdiction justice courts and hear cases such as small claims, evictions, orders of protection, misdemeanor crimes and some traffic infractions.

They serve four-year terms and receive an annual salary of about $100,000.

Candidates do not need to be attorneys or have any specific education. Before becoming a JP, Lopez was a hearing officer in and around the Maricopa County Justice Courts.

She also worked in government relations, she said. She has an associate’s degree in legal arts and a bachelor’s degree in management, according to her biography on the county’s website.

Lopez said she loves serving her community and cares deeply about her constituents.

“For me, it’s the people,” she said. “I tell them from the bench, I’m a big mama hen. Do not be doing things that you shouldn’t in my district because I’m here to protect them and you’re putting them in danger if you do otherwise. “