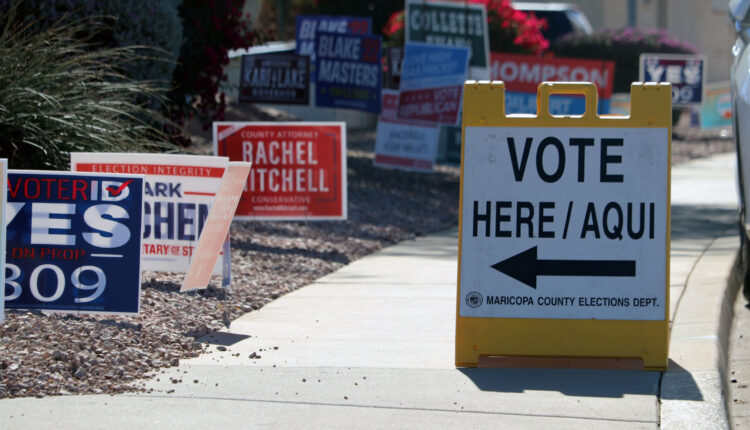 A last-minute request from Abraham Hamadeh to increase the number of election documents he can inspect ahead of a trial to decide whether misconduct cost him the attorney general race was denied by a judge on Thursday.

Hamadeh is challenging his 511-vote loss to Democratic Attorney General-elect Kris Mayes, claiming that incorrectly counted ballots and poll worker errors are to blame. On Wednesday, Mohave County Superior Court Judge Lee Jantzen granted Hamadeh permission to examine ballots in Pima, Navajo and Maricopa counties to gather evidence ahead of the trial on Friday. Timothy La Sota, Hamadeh’s attorney, later filed a request to inspect the cast vote record —  a spreadsheet created by the tabulation system that records every vote on every ballot.

“We have to have the CVR to really make heads or tails of the ballots,” La Sota said during an emergency hearing  Thursday morning. “It’s sort of the tally of the ballots.”

La Sota also requested that a list of provisional ballot recipients in Maricopa County be provided. A key part of Hamadeh’s lawsuit is that as many as 1,942 provisional ballots — given when a voter’s eligibility to vote is in question — were wrongfully rejected by election workers. To be able to sift through everything with enough time to present a case, La Sota asked that the trial be moved to next Tuesday.

Attorney Alexis Danneman, representing Mayes, rebutted that state law has strict guidelines for how an election challenge may be carried out, and neither of La Sota’s requests would be legal. State law says only ballots may be inspected and expressly forbids that any electronic voting data be shared. As well, election contests must begin within 15 days after a lawsuit is filed and Hamadeh brought his challenge on Dec. 9, making Dec. 27 too late.

“We don’t have to guess what the legislature wanted,” she said. “In this case they’ve made clear what’s permitted in election contests, that’s a very narrow thing.”

Maricopa County attorney Joseph La Rue added that allowing the examination of the cast vote record could present a security risk. Information in the document could be used to identify voters, which would also be a violation of the state constitution’s secrecy clause that guarantees the right to vote via a secret ballot.

“There is a possibility that someone with technical expertise and with the right pieces of information could reverse engineer the CVR…to identify particular voters and their ballots,” La Rue warned.

La Sota also requested an increase in the number of inspectors assigned to review the ballots. State law allows for a team of three, but La Sota asked for three teams of three.

La Rue pointed out this would be difficult to accommodate in Maricopa County, especially given that the county’s elections director Scott Jarrett is tied up in trial proceedings for failed Republican gubernatorial candidate Kari Lake’s lawsuit. La Sota was notified that Wednesday would be the only opening this week to inspect ballots but failed to show up.

Jantzen disagreed with this interpretation, deciding to allow one team of three per county.

Jantzen dismissed concerns from opposing attorneys that changing the accepted number of inspectors could open the gates to future requests for unlimited inspectors. La Sota’s other requests to inspect the cast vote record and receive a provisional ballot list were denied, with Jantzen noting that neither document is a ballot and state law strictly says only ballots can be part of an election contest.

While Jantzen indicated he would be willing to move the trial to next week, he said he would rather get to it quickly. La Sota agreed to inspect only undervotes in each county, given the time constraints of a short turnaround. Hamadeh has claimed that rampant undervotes — when a tabulator is unable to read a voter’s marks — resulted in incorrectly counted ballots that shifted the race against him.

The trial is set to start 9 a.m. Friday, Dec. 23 and Hamadeh will have to show proof that ballots were incorrectly counted and that they exist in numbers great enough to overturn his 511-vote loss.