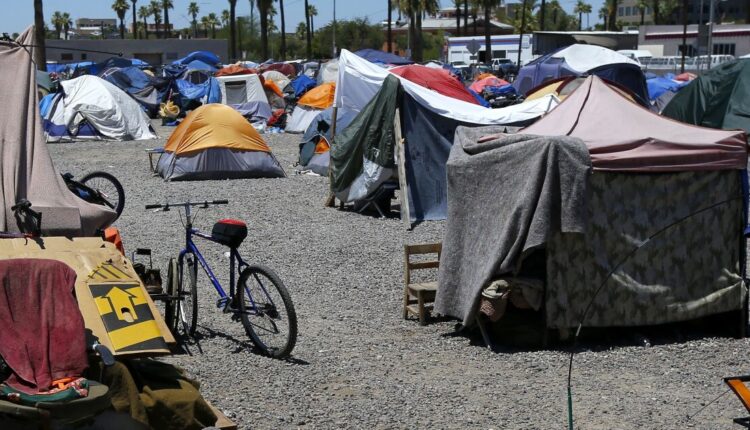 A federal judge has temporarily halted the city of Phoenix from conducting sweeps of a huge homeless encampment downtown.

Judge Murray Snow issued an emergency injunction Thursday in response to a lawsuit filed in US District Court by the ACLU of Arizona.

The order prohibits authorities from enforcing sleeping and camping bans on anyone who cannot obtain a bed in a shelter. They also cannot seize property unless it is contraband or somehow a threat.

However, the judge says the injunction does not stop the city from carrying out “enhanced cleanup plans” in “the Zone,” the name given for the area where unhoused people often camp out.

In its complaint, the ACLU says the sweeps have displaced people and destroyed important belongings such as identification documents and prescription medications.

“Today’s ruling affirms the city must do more to protect the constitutional rights of the unsheltered community,” said Benjamin Rundall, an ACLU of Arizona attorney. “Because of this injunction, unsheltered people won’t be at risk of losing essential belongings, receiving unconstitutional citations, and experiencing further trauma at the hands of the city and Phoenix PD. ”

“We will thoroughly review and adjust our practices if we need to make any additional modifications,” Couturier said. “Our process withstood a legal challenge and we are confident that continuing the enhanced cleanings with these measures in place will protect the constitutional rights of our unsheltered residents.”

Meanwhile, the city also continued with its cleanup plans Friday and directly approaching unsheltered people with access to services. So far, more than 30 people were placed in shelter, according to Couturier.

The sweeps were paused at the beginning of this year. But officials previously have said they have taken strategies to combat homelessness, including dedicating nearly $50 million during the last fiscal year to shelters and other services. The city added 592 new beds to homeless shelters this year.

The federal complaint is the latest move in an ongoing tug-of-war between advocates and cities in Western states about how best to tackle the problem of homelessness.