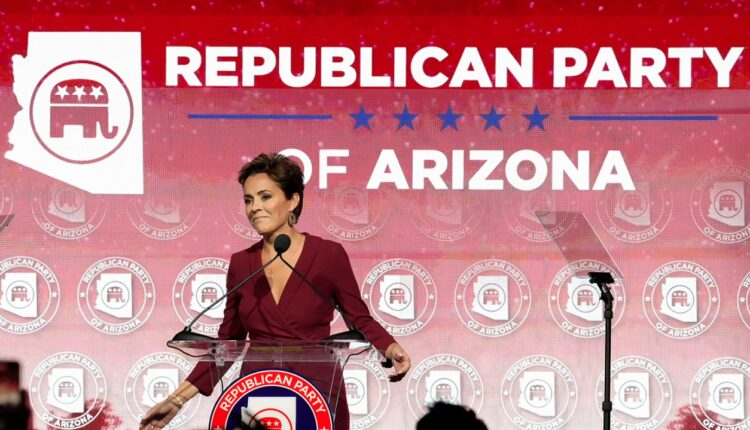 Defeated Arizona Republican gubernatorial candidate Kari Lake called for Maricopa County election officials to be “locked up” on Sunday as Lake gears up to contest her opponent’s certified victory in court hearings this week.

“These people are crooks, they need to be locked up,” Lake said of Maricopa County election officials, after listing off a series of largely disproven claims about election fraud.

Election officials acknowledged the issues and insisted affected voters could use one of multiple backup options.

But Lake and others in the GOP have claimed the issues effectively amounted to voter disenfranchisement, noting that Election Day ballots in the state favor Republicans.

Lake on Sunday compared her challenge to the founding fathers fighting against British tyranny, repeatedly naming Benjamin Franklin and others as she said their blood is “coursing through our veins.”

“They were fed up with tyrants, and they weren’t going to take it anymore,” Lake said. “I think we’re right there, right now, aren’t we?”

Maricopa County and Hobbs, in both their capacities as secretary of state and as a gubernatorial candidate, asked a state judge to dismiss Lake’s election challenge.

Oral arguments on the motion are set for Monday, and a two-day trial is scheduled for later this week if the case moves forward.

Lake at Sunday’s event said she wasn’t sure how the judge would rule on the dismissal motion, asking the crowd to pray for him.

“We’ve seen judges dismiss cases, I don’t want you to get discouraged,” Lake told the crowd. “It could happen. We’re gonna kick this right up to the Supreme Court, and I will not stop fighting.”

Among other allegations, Lake on Sunday claimed 300,000 ballots in Maricopa County were tabulated without proper chain of custody paperwork, as she has alleged in court, calling county election officials “magicians” who made ballots randomly appear.

“This allegation is false, and will be easily disproven by the County if necessary,” Maricopa County said in court filings, suggesting Lake “does not understand” that the various types of chain-of-custody paperwork and the proper documentation exists for the ballots in question.

Unsuccessful Arizona Republican secretary of state candidate Mark Finchem contested his loss based on some of the same allegations, but a judge dismissed his case on Friday.

Lake on Sunday dug in to her battle over Hobbs’s victory, with Lake saying her pronouns were, “I won.”

She proceeded to describe Maricopa County’s election system as a “house of cards.”

“I think they’re all wondering what I’m going to do,” Lake told the crowd. “I’ll tell you what, I’m not going to just knock that house of cards over. We’re going to burn it to the ground.”