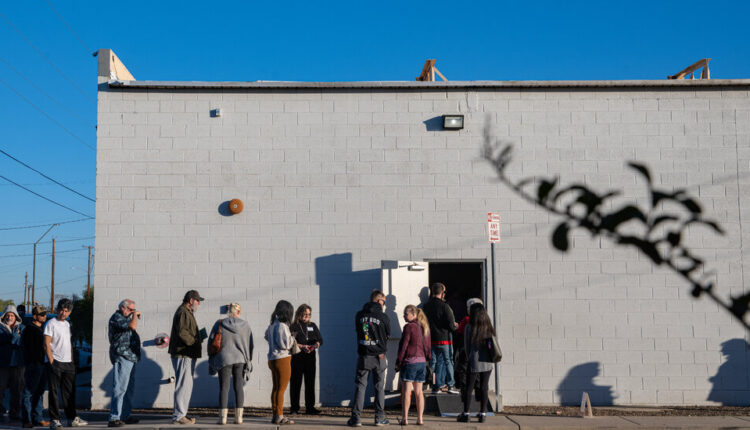 Kari Lake Claims Her Voters Were Disenfranchised. Her Voters Tell a Different Story.

Both Ms. Gilbertson and Mr. Ellington said that the mass malfunction of the printers had so far baffled the county’s and the company’s technicians. Ms. Gilbertson said that a full investigation would be conducted once the more immediate task of counting the ballots had been completed.

“We are going to look into the root cause,” Ms. Gilbertson said.

Technicians had solved the printer problem by late morning on Election Day, and by the afternoon the affected printers’ settings had been updated. In the meantime, poll workers offered voters three options for casting their ballots. The simplest was to place them in a slot marked “3” in the locked box beneath the tabulator, for collection and counting later at the county’s central elections facility in downtown Phoenix.

But within two hours of the first printer problems, wild claims and free-floating suspicions were circulating on social media surrounding Slot 3, or Box 3 as it was often called, including posts by Kelli Ward, the chairwoman of the state Republican Party, and Andy Biggs, a Republican congressman from Arizona. After Maricopa County officials on Twitter had informed voters affected by the glitch of their options, including using Box 3, Ms. Ward tweeted in response: “DO NOT PUT YOUR BALLOT IN ‘BOX 3’ TO BE TABULATED DOWNTOWN. Maricopa County is not turning on their tabs downtown today!” Her post was retweeted almost 400 times.

As the day went on, Ms. Lake’s campaign, wary of depressing turnout, began gently pushing back on its political allies’ claims.

Harmeet Dhillon, a lawyer for the campaign, tried to reassure voters on Twitter about the integrity of their ballots that had been set aside for later counting. “They have to have this,” she wrote of Box 3. “It isn’t nefarious per se.” At a news conference, Ms. Lake urged her supporters to stay in line to vote, and Ms. Dhillon again reassured them about using Box 3.

County election officials have blamed the Box 3 claims and other conspiracy theories for exacerbating the slowdowns and confusion caused by the printer malfunctions. Ms. Gilbertson said that 146 provisional ballots out of the near-total of 1.6 million votes counted so far in the county had been set aside for further research, because the voters had checked in at more than one polling place.

Bill Gates, the chairman of the Maricopa board of supervisors and a former election lawyer for the state Republican Party, said some voters “were insisting on putting the ballot through the tabulator 10, 20, even 40 times.”