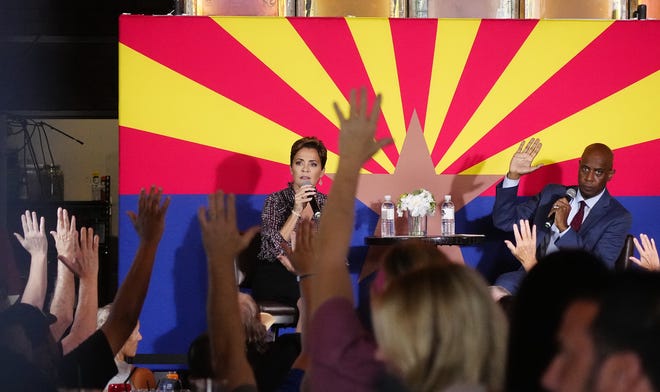 Republican gubernatorial candidate Kari Lake filed a lawsuit against Maricopa County officials on Wednesday, accusing them of breaking election laws and demanding they provide information about voters whose ballots were impacted by Election Day printer issues.

Her case joins other challenges and criticisms hurled at Maricopa County by conservative politicians and personalities in the past week.

“We want some information,” Lake said. “We’re on a timeline, a very strict timeline when it comes to fighting this botched election, and they’re dragging their feet.”

Seventy of the county’s 223 voting centers experienced problems with on-site printers producing ballots too light to be read by vote-counting machines on Election Day, causing frustration and long lines for voters. Lake’s filing alleges that as many as 118 voting locations may have experienced problems.

Maricopa County officials declined to comment on the filing.

Unofficial election results show Lake losing by about 17,000 votes to Democrat Katie Hobbs, one of several bruising losses for the GOP, which ran at the top of the ballot a slate of candidates casting doubt on elections. An Arizona Republic analysis of voting patterns found that many Republicans didn’t vote for Republican candidates in some of the largest races of the election.

Lake has previously suggested that she will not accept defeat and has repeatedly sowed doubt around the election. On Election Day, she said printer problems were “primarily in Republican areas of town.” A Republic analysis found the problems were roughly evenly split between precincts going for Lake and those going for Hobbs.

Her legal challenge comes within days of an election lawsuit from Abe Hamadeh, the Republican nominee for state attorney general; a letter from the Arizona Attorney General’s Office requesting a formal response from the county about its Election Day printer woes; and a subpoena from state Sen. Kelly Townsend seeking information and records related to the same problems.

Lake’s suit asks for numerous public records, including names and contact information for voters at polling sites that experienced printer malfunctions, the number of ballots spoiled on Election Day, adjudication rates by legislative district and the number of ballots sent to overseas voters and their verification processes .

“These public records are vital to the integrity of the election process and necessary to show, ahead of canvassing, that every legal ballot was properly counted,” the suit reads.

The filing requests that the court require the county to provide the requested information by Nov. 28. That’s the same deadline as Townsend’s subpoena and the same due date for a response to the letter from the Attorney General’s Office, which Lake’s suit has some overlap with in regards to the information it requests.

It’s also the same day that county officials plan to canvass, or certify, election results and send official tallies to the Arizona Secretary of State’s Office.

On Wednesday, Lake suggested the suit might be followed with further legal action over her loss.

Sasha Hupka covers Maricopa County and regional issues for The Arizona Republic with a focus on voting and democracy. Do you have a tip about elections or a question about voting? Reach out to [email protected] Follow her on Twitter: @SashaHupka.

HIV Outbreak Persists as Officials Push Back Against Containment Efforts