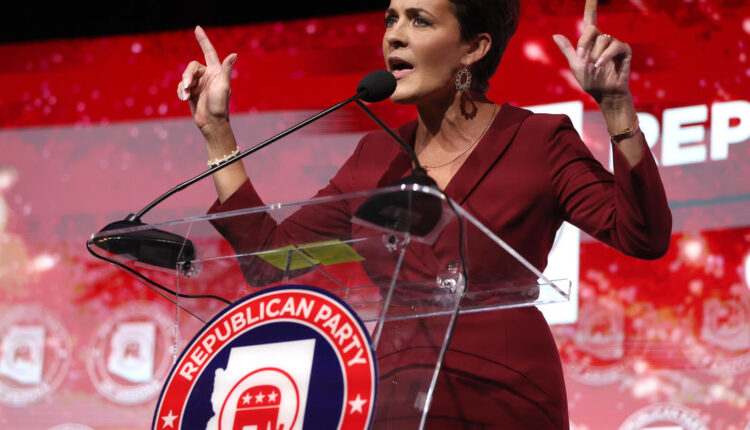 Arizona Republican gubernatorial candidate Kari Lake has filed a lawsuit against Maricopa County elections officials, alleging they broke election laws. Lake also claimed that 118 polling centers appeared to have a “printer/tabulation problem,” although officials previously said there were 60 polling centers with printer issues that were fixed before polls closed.

Democrat Katie Hobbs, who currently serves as Arizona secretary of state, was projected as the winner of the race 10 days ago. Lake, a close ally of former President Donald Trump who has refused to acknowledge President Joe Biden won the 2020 election, has not yet conceded the governor’s race.

Lake announced the lawsuit Wednesday on Steve Bannon’s podcast “War Room,” calling the 2022 election “the shoddiest election ever, in history.”

“We want some information,” Lake said. “We’re on a timeline, a very strict timeline when it comes to fighting this botched election, and they’re dragging their feet.”

Arizona Republican gubernatorial nominee Kari Lake speaks to supporters during her election night event at The Scottsdale Resort at McCormick Ranch on November 08, 2022 in Scottsdale, Arizona.

On Election Day, Maricopa County Board of Supervisors chairman Bill Gates said there were 60 polling sites that had printing problems, and they were fixed before polls closed. Gates said then that the printer issue was technical — the ink didn’t print dark enough for the machines to be readable.

But Lake alleged in the lawsuit that “because of the printer/tabulator problems, the polling locations were chaotic, voters were frustrated, and voters had to endure long lines.”

Lake’s lawsuit also asks for several public records, especially related to canvassing. The filing says that without access to the requested records, the plaintiff “cannot ascertain the full extent of the problems identified and their impacts on electors.”

Lake released a video last week saying she had “assembled the best and brightest legal team, and we are exploring every avenue to correct the many wrongs that have been done this past week.”

Lake has been alleging problems in Maricopa County, Arizona’s largest county which encompasses Phoenix, since Election Day. On Nov. 9, she said on Fox News that the state had “shoddy elections that are run by imbeciles” and if elected, she said she would call a special session of the Arizona Legislature to address it.

She also said elections officials were “slow rolling” the ballot counting process, an allegation that Gates said on Nov. 10 was “offensive.”

“We’re absolutely not slow-rolling it and if their team had been paying attention before the election, they would have heard us talk about this over and over again, that we would not have results on election night or even the next day, Gates said. “That it was going to take several days. And quite frankly it is offensive for Kari Lake to say these people behind me are slow rolling this when they are working 14-18 hours.”