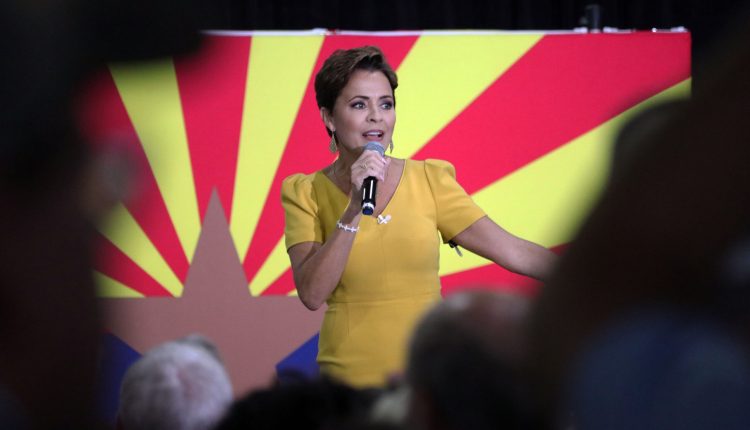 Kari Lake claimed in an interview on Sunday that new abortion restrictions could lead to “locking up a lot more rapists.” But exactly how that would happen is unclear, and critics say the idea is utter hogwash.

Lake, the Republican nominee for governor, made the assertion during a televised interview by KTAR radio host Mike Broomhead that was sponsored by the Arizona Clean Elections Commission.

“There is zero evidence to support that,” Gunnigle said about Lake’s statement. “When I heard those comments, I was absolutely horrified, and I say that as someone who has not just prosecuted sexual assaults and domestic violence cases, but as someone who represents survivors in court trying to escape these situations.”

The Lake campaign did not respond to multiple requests to clarify how increased abortion restrictions would lead to more rapists being apprehended or convicted. Neither of the two abortion restriction laws currently on the books in Arizona — a near-total ban that originated in 1864 and or a 15-week ban signed into law in the spring — include exceptions for rape and incest, adding to the confusion over Lake’s statement.

“There are absolutely no proven connections between lack of access to abortion and imprisonment of rapists,” said Jenna Panas, CEO of the Arizona Coalition to End Sexual and Domestic Violence. “I am confused and incredulous.”

The Maricopa County Attorney’s Office, which is led by Gunnigle’s Republican opponent, Rachel Mitchell, is responsible for prosecuting sexual assault offenders. It declined to comment. And Mitchell’s campaign did not respond to an interview request.

Lake said that she believes that the 15-week ban passed into law earlier this year had exceptions for rape and incest — it does not — because the mother would know she is pregnant by 15 weeks and could get an abortion before that time if she wanted one.

This statement ignores the reality for women and children who are forcibly impregnated by family members who might hold physical and financial power over them.

“We’re literally talking about family members who have power and control over a person,” Gunnigle said. “Oftentimes, it takes years, if not decades, for someone to feel comfortable enough to report when they have been victimized by a member of their own family.”

In those instances, reporting rape or incest to gain access to an abortion could put the victim in danger, Gunnigle said.

There are absolutely no proven connections between lack of access to abortion and imprisonment of rapists. I am confused and incredulous.

In addition, while 69% of adults in the U.S. support abortion access for women impregnated through rape or incest, only about 1% of people who seek abortions say that they did so because they had been raped, according to the Guttmacher Institute.

In Arizona, an estimated 40 women in 2020 (the most recent year for which data has been published) reported receiving abortions because they were the victims of sexual assault, according to state abortion data.

Gunnigle added that, if there was an abortion restriction law on the books in Arizona that included exceptions for rape and incest, she would want to know what sort of burden of proof would be placed on the victim before they would be allowed an abortion, especially since sexual assault cases typically take longer than nine months to resolve.

Nationwide, only about 310 out of every 1,000 rapes are ever reported, according to RAINN, the Rape, Abuse and Incest National Network.

Even if increased abortion restrictions did somehow lead to more reports of sexual assault, the sobering truth is that most perpetrators don’t end up imprisoned for their crimes.

Only about 50 out of every 1,000 rapes result in an arrest, and only 28 of those 50 end with a felony conviction, according to RAINN.

And that low conviction rate is just one of the reasons that people don’t report sexual assaults, Gunnigle said.

“Lake’s statement is ridiculous, offensive and actively harmful to survivors of sexual assault and anyone seeking abortion care,” said Darrell Hill, policy director for the ACLU of Arizona. “Our government should never force people to seek permission from the courts to receive necessary healthcare. If Lake wanted to support survivors, she should closely listen to their needs rather than make up baseless theories.”

During the interview Lake called rape and incest horrifying and said she wanted to help women who were victims of it, but did not commit to backing exceptions in any abortion restriction laws she might sign as governor.

“The real death sentence should go to the person who raped, not a baby,” she said.

In Arizona, the death penalty is not an option for someone convicted of sexual assault. Penalties for sexual assault, which includes rape, range from around five years in prison to life imprisonment, if the sexual assault includes intentional inflictions of serious bodily injury.