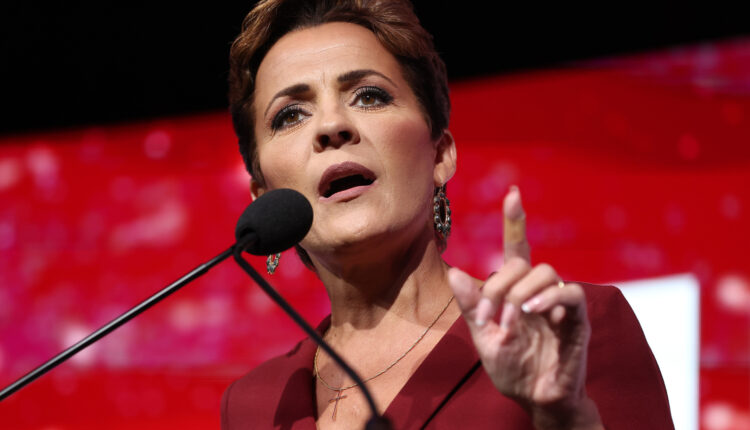 Kari Lake named several Maricopa County officials in a Wednesday lawsuit that is aimed at gaining access to 2022 election records.

Several of the individuals named in their lawsuit are Republican leaders in the county.

Lake, a Republican endorsed by former President Donald Trump, ran for governor in Arizona this election cycle. She has yet to concede the race, which was called for Democrat Katie Hobbs last week. Arizona’s outgoing Republican governor, Doug Ducey, has already met with Hobbs as she prepares to step in as the state’s new governor in January.

Arizona Republican gubernatorial nominee Kari Lake sued election officials in Maricopa County on Wednesday in an effort to gain access to election records. Above, Lake speaks to supporters during her election night event at The Scottsdale Resort at McCormick Ranch on November 8, 2022 in Scottsdale, Arizona.
Justin Sullivan/Getty Images

Lake has repeatedly questioned the integrity of this year’s midterm elections in Arizona. She told supporters earlier this week that she intends to “continue fighting” the results of what she described as a “botched” election. She has alleged that voting machine problems and long waits to vote in person “discriminated against people who chose to vote on Election Day.”

On Wednesday, Lake’s political committee Kari Lake for Arizona filed a lawsuit “to compel the prompt production of public records pursuant to the Arizona Public Records Act,” court documents showed. She alleged that “many” people in Arizona “may not have been able to vote,” citing “instances of misprinted ballots, the commingling of counted and uncounted ballots, and long lines discouraging people from voting” as examples.

Lake’s lawsuit calls for the release of the county’s election records. Two public records requests Lake’s team has already filed that asked for the records have been “unlawfully refused,” the complaint said. Lake’s political committee further said that she “cannot determine that every lawful vote will be counted” without access to records showing how county officials conducted the election.

“We need information from Maricopa County,” Lake told Steve Bannon during a Wednesday appearance on Bannon’s War Room, during which Lake discussed the lawsuit. “They ran the shoddiest election ever, in history, and we want some information.”

Lake’s lawsuit names Maricopa County and eight county officials as defendants in the complaint. The first individual named in the lawsuit is Stephen Richer, who is the Maricopa County Recorder and a member of the Republican Party. Richer formed a political action committee last fall called the Pro-Democracy Republicans PAC, which said on its website that the time has come for Republicans to “accept and acknowledge” that Trump lost the 2020 presidential election. The PAC says it was launched “to support pro-democracy Arizona Republicans.”

Lake criticized Richer for his PAC in a Wednesday tweet.

Lake linked her tweet to an article by The Arizona Sun Times, which reported that Richer’s PAC received money from donors who support Democratic candidates. She also called upon Arizona’s attorney general to investigate Richer and his PAC.

In addition to Richer, Lake’s lawsuit names as co-defendants Rey Valenzuela, Maricopa County’s director of elections for election services and early voting, and Scott Jarrett, the county’s director of elections for Election Day and emergency voting. Also listed as defendants are the five individuals who were elected to serve on Maricopa County’s Board of Supervisors: Chairman Bill Gates, Vice Chairman Clint Hickman, and supervisors Jack Sellers, Thomas Galvin and Steve Gallardo. Gates, Hickman, Sellers and Galvin are all Republicans.

Her Credit Was Ruined by Medical Debt. She’s Been Turned Away From Doctors, Jobs, and Loans