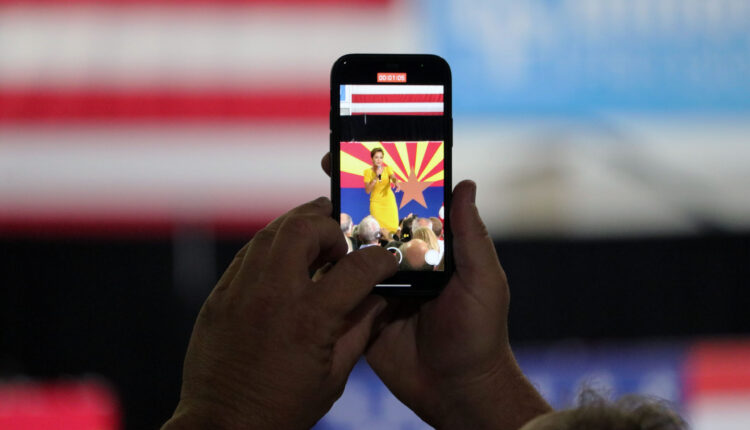 Kari Lake wants to overturn her loss in last month’s election, but has failed to identify even one illegal ballot cast, point out a single person who was denied the right to vote or identify any specific instances of fraud, meaning the election challenge must be dismissed, the secretary of state and Maricopa County officials argued in filings.

In her suit against Secretary of State and Gov.-elect Katie Hobbs, the Maricopa County Board of Supervisors and other county officials, Lake claims that hundreds of thousands of illegal ballots “infected the election in Maricopa County.”

Hobbs and Maricopa County filed separate motions to dismiss the suit Thursday, both on the grounds that Lake failed to state a valid claim to challenge an election.

“This Court should not indulge this contest for a minute longer than it takes to dismiss it,” Andy Gaona, Hobbs’ attorney, said in their motion.

Lake, a Trump-endorsed Republican and prominent proponent of the “Big Lie” that the 2020 election was stolen from Trump, lost her bid for Arizona governor to Democrat Hobbs by more than 17,000 votes. In her challenge, Lake calls for her loss to be thrown out and for the county to conduct a new election.

In its motion to dismiss, the county said that the claims made in Lake’s suit are “mostly based on unwarranted speculation, and do not stand up to even the barest of scrutiny.”

Hobbs and the county both pointed out that the legal grounds for election contests in Arizona courts are narrow, and are only allowed when there is official misconduct on the part of the election boards; a candidate’s right to hold office is contested; there are accusations of bribery or other offenses by one of the candidates; or there are enough illegal votes identified to sway the outcome of the election.

“Instead of alleging actual facts and real numbers, Lake’s contest rests on rank speculation and a cynical mistrust of Arizona’s election officials,” Gaona wrote. “None of Lake’s allegations are sufficiently well-pled to establish a valid election contest.”

For example, Lake’s suit includes statements from 220 Maricopa County voters who said they were impacted by ballot printer issues on Election Day.

“It appears that there are only three (statements) from voters who did not actually cast a ballot on November 8, 2022,” Maricopa County said in its motion. “And none of those (three) voters were prevented from casting a ballot by the Defendants, but instead each chose not to vote because the declarant decided that waiting in line or visiting a different polling place was a greater inconvenience than the value they placed on voting that day.”

In the suit, Lake claimed that tens of thousands of people gave up on voting that day because of the issues with the printers.

When printers malfunctioned at around 70 out of 223 Maricopa County voting centers on Election Day, tabulators rejected some of the ballots. Voters whose ballots were rejected were given the option of putting their ballot in a secure box to be counted later, spoiling their ballot and trying to vote a new one, or going to a different voting center.

Lake’s attorneys claimed in her suit that the Election Day printer errors were an intentional effort to disenfranchise Republican voters, since it was well known that many Republicans were waiting for Election Day to cast their votes in person, while more Democratic voters cast early ballots. She also claimed, without any evidence, that the machines were “hacked.”

But Maricopa County’s lawyers pointed out that Lake failed to identify who she believes made that intentional effort, “what action that actor undertook to affect the BOD (ballot-on-demand) printers, or when or where the action occurred. It is nothing more than speculation about the root cause of acknowledged technical issues that occurred on election day.”

The reality, as first reported by Votebeat, is that the printers were not designed to handle the heavy paper Maricopa County used on its ballots in 2022.

While Lake claimed that fraud occurred during the 2022 midterm election, her suit does not point to any specific instances of it.

“Rather than plead particular circumstances of fraud, Lake simply airs baseless suspicions that someone—maybe even everyone—involved in the election was out to get her,” Gaona wrote. “That is not enough to trigger the legal machinery for an election contest.”

In her motion, Hobbs’ lawyers pointed to a decision from the Arizona Supreme Court in 1917 that said claims of fraud “ought never to be inferred from slight irregularities, unconnected with incriminating circumstances; nor should it be held as established by mere suspicions.”

In the suit, Lake also pointed to issues with the county’s verification process for signatures on early ballot envelopes, citing statements from a handful of people who worked in signature verification for the county during the midterm.

“Lake’s signature verification claim fails to allege any actual ballots that were improperly verified in the 2022 gubernatorial election,” Gaona wrote. “Mere suspicions about the process do not amount to a number of votes sufficient to reverse the election.”

While statements from the workers point to the potential for workers to improperly verify signatures, it does not identify any specific instance of this actually happening. But in her suit, Lake claimed that tens of thousands of ballots with bad signatures were counted.

“At best, these allegations imply an opportunity for abuse, not actual misconduct,” Gaona wrote.

Attorneys representing Hobbs also dismissed several of Lake’s claims that reference the 2020 election and the run up to this year’s midterm, saying that they should have been addressed prior to Nov. 8.

These claims include issues with the certification of election equipment in Maricopa County and the voter signature verification processes, both dating to 2019.

Lake’s suit also challenges the use of early ballots altogether, which have been used in Arizona since the early 1990s.

“Lake has been running for governor since mid-2021, at which point all of these procedures and practices became directly relevant to her candidacy,” Gaona wrote. “And yet, Lake waited until after she lost the election to file suit.”

Lake’s suit also accused Hobbs of violating the First Amendment when her office asked Twitter to review posts that made false claims about Arizona elections in the immediate aftermath of the failed insurrection at the U.S. Capitol in January 2021. Gaona pointed out that Twitter made the decision to take down the posts, with no evidence Hobbs’ office coerced it into doing so.

“Plaintiff’s Complaint and much of its supporting material is based on pure speculation about what might have happened in the 2022 general election, but it wholly lacks allegations about what actually happened with respect to the ballots cast by the 2,592,313 Arizonans who participated in the election,” Karen Hartman-Tellez, an attorney for Maricopa County, wrote.

Lake’s lawyers have until noon Saturday to respond to the motions to dismiss.