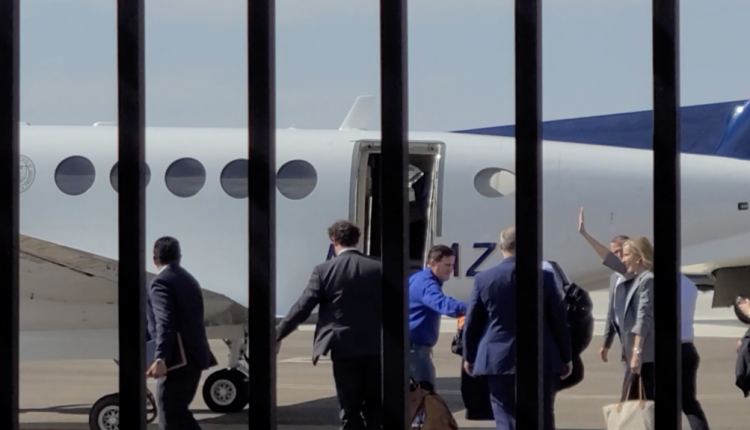 After flying to Tucson on her family’s private jet for a campaign event Friday, Republican gubernatorial candidate Karrin Taylor Robson hitched a ride back home on Gov. Doug Ducey’s state plane because her jet was ferrying former Vice President Mike Pence to Nevada.

And Robson’s campaign will have to reimburse the state for not just that trip, but for the cost of sending the state plane to Southern Arizona to pick them up.

Robson, Ducey, Pence and their entourages all boarded Robson’s jet on July 22 after a campaign event in Peoria and flew to Marana Regional Airport on July 22 for a second event in Tucson. But video footage obtained by the Arizona Mirror shows that Ducey and Robson boarded the governor’s state-owned plane to return to Phoenix after the Tucson event ended.

Pence, meanwhile, crossed the tarmac to board Robson’s jet. Flight records show the plane flew to Reno, Nev., where it landed at 5:45 p.m. Just four minutes later, the plane was airborne again, en route to Scottsdale Airport, where it touched down just after 7:20 p.m.

“The campaign was fortunate to have the Vice President’s attendance at our event and, of course, arranged for travel to his next destination,” Robson campaign spokesman Matthew Benson told the Arizona Mirror. “Ed (Robson) and Karrin will pay the cost of that flight and it will be reported as an in-kind contribution to the campaign.”

The Governor’s Office says Robson will also be on the hook for her use of the state plane, as well as the cost of sending it to Marana to fly her and Ducey back to Phoenix.

CJ Karamargin, a spokesman for Ducey, said the state plane flew from Sky Harbor International Airport, where it is hangared, to Glendale Municipal Airport so it could transport Ducey after Robson’s morning campaign event in Tucson. But Ducey then decided to join Robson and Pence on the luxury jet for the roughly 75-minute flight to Marana, so the state plane flew to Marana to be available for the return trip.

Former Vice President Mike Pence (center) prepares to board the luxury jet owned by the family of GOP gubernatorial candidate Karrin Taylor Robson after a July 22, 2022, campaign event in Tucson.

Three non-state employees used the plane, one of which was Robson. DPS will calculate the costs for the flight and bill the campaign accordingly, Karamargin said.

Robson’s campaign is already facing questions about its use of her family’s private jet. A recent report by 3TV/CBS 5 found the campaign hadn’t reported a single use of the jet in its campaign finance reports, even though it had been used to travel to a number of campaign related events. “The Karrin for Arizona campaign properly accounts for all campaign expenses, including air travel,” Benson said. “In terms of the plane utilized Friday for travel between campaign events in Glendale and Tucson, Ed and Karrin Taylor Robson will reimburse for those expenses and report them as an in-kind donation. For any previous campaign travel, expenses have and will be similarly reimbursed and reflected in amended campaign-finance reports, as necessary.”

One Valley attorney says there could be a problem with that reimbursement.

According to Arizona law, an LLC cannot make a contribution to a candidate committee, said attorney Tom Ryan. The Robsons’ private jet is owned by an LLC, and Ryan contends that it runs afoul of the Arizona law.

But the Robson campaign says his analysis is wrong.

“That provision does not apply in this instance, as Ed and Karrin are paying the cost of the travel,” Benson said. “This is a standard practice when candidates directly pay for services and decide to make an in-kind contribution in support of their campaign. Use of the private plane does not constitute an in-kind donation from the LLC in any way, shape or form.”

But these aren’t the only flights the Robson campaign will be paying for.

Ryan also said he thinks it was illegal for Robson to fly back to Phoenix on Ducey’s plane. He said the trip could violate a state law passed in 2012 aimed at disallowing the use of public resources from influencing elections.

The Governor’s Office said Ducey is required by law to have DPS protection and defended the use of the aircraft.

“The governor is the governor, regardless of what he is doing,” Karamargin said, adding that the Robson campaign will be reimbursing the state for the portion of the trip she flew on. Karamargin said that any time a non-state employee uses the aircraft, they have to reimburse the state.

To Stem the Spread of Monkeypox, Health Departments Tap Into Networks of Those Most at Risk