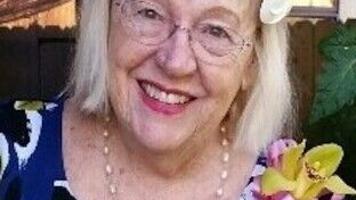 80, was born June 3 and died September 26, 2021. She graduated from Sierra HS in Whitter, California and in 1941 from Mt San Antonio, Pomona, CA. and approved as RN. She met her husband Kevin in 1955 and married in 1962. A year later she began an odyssey of moving 18 times in 12 years while Kevin flew as a fighter pilot in Vietnam and later in the United States. Kathie eventually settled in Tucson, where they raised their five children, two of whom were adopted Korean brothers who have since passed away. From 1968 to 2018 they were involved as a couple in several Catholic marriage ministries. Together they presented and helped hundreds and perhaps saved their marriages from divorce. In 1996, with an insatiable desire to help others and give her life, she started working in Healing Touch. Here she found powerful techniques combined with all of her previous marital healing work to help others find peace and tools to make their lives better than great. She believed this, and better still, she lived it. The mass will take place on Monday, October 4, 2021 at 10:30 a.m. in OMOS, followed by the burial in Holy Hope Cemetery. Arrangements by BRING’S BROADWAY CHAPEL.

Sign up to get the latest local obituaries delivered to your inbox.