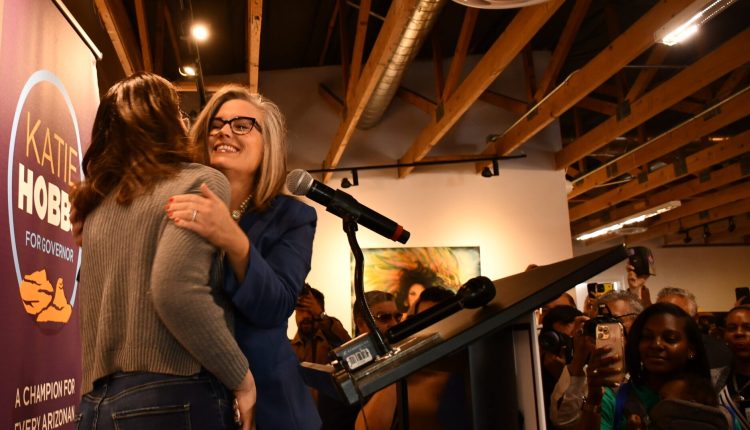 Governor-elect Katie Hobbs walked into a crowded room of jubilant Democratic supporters Tuesday morning in Phoenix, to give a victory speech after a contentious race that she was not favored to win.

Meanwhile, her Republican opponent Kari Lake had not conceded the race and continued to criticize elections in Maricopa County, with Lake’s campaign even saying that Hobbs, who is the current secretary of state, had no incentive to run the midterm election properly.

“In this election, Arizonans chose solving our problems over conspiracy theories,” Hobbs told the crowd on Tuesday. “We chose sanity over chaos and we chose unity over division.”

Lake is one of several Trump-endorsed Republican candidates in statewide races in Arizona that voters rejected, after campaigning on 2020 election denialism. Others include secretary of state candidate Mark Finchem, who lost to Democrat Adrian Fontes, and U.S. Senate candidate Blake Masters, who lost to incumbent Mark Kelly.

The race for attorney general, in which Republican election-denier Abe Hamadeh ran against Democrat Kris Mayes, is still too close to call.

If Mayes wins, it will be the first time since 1972 that Democrats have taken the top three statewide races in Arizona.

Even with several Democratic victories in hand, Hobbs urged caution.

“The attacks on democracy won’t end today with this victory,” she said. “And so it is on all of us to continue to defend it.”

She promised to move forward, working with legislators from both sides of the aisle on urgent issues like Arizona’s water and border crises, homelessness, inflation, housing and reproductive rights for women.

“As soon as my term begins, I will do everything in my power to repeal the draconian 1864 abortion ban that puts so many women’s lives at risk,” Hobbs said, to cheers from the crowd.

If Hobbs wants to get anything done, she doesn’t have much choice but to work across the aisle, with both the Arizona House and Senate remaining under Republican control.

“For those Arizonans who didn’t vote for me, know that I will work just as hard for you, because even in this moment of division, I believe there is so much more that connects us,” Hobbs said. “We all want lower costs, safer streets, a secure border, better schools and water for generations to come.”

Hobbs was introduced Tuesday by her daughter, Hannah Goodman, who said she’s amazed at how far her mother has come.

“I’ve seen my mom give this campaign her all,” Goodman said. “She’s the strongest woman that I know. She’s constantly teaching me that through hard work and perseverance, I can achieve anything that I put my mind to.”

Mary Halford, a member of the Arizona branch of the National Association of Letter Carriers, said after the event on Tuesday that she felt like all her hard work campaigning to help elect candidates she believed were best for working people had finally paid off.

“Today, I feel wonderful,” she said. “All those doors I knocked on, all that time I spent talking to people, it was well worth it.”

Republicans harshly criticized Maricopa County for its handling of the midterm election, in which about 70 of its voting centers experienced issues with ballot tabulators, contributing to long lines and delays. Republicans also balked at how long it took Maricopa County to count its ballots, a practice that typically takes the county 10-12 days to complete.