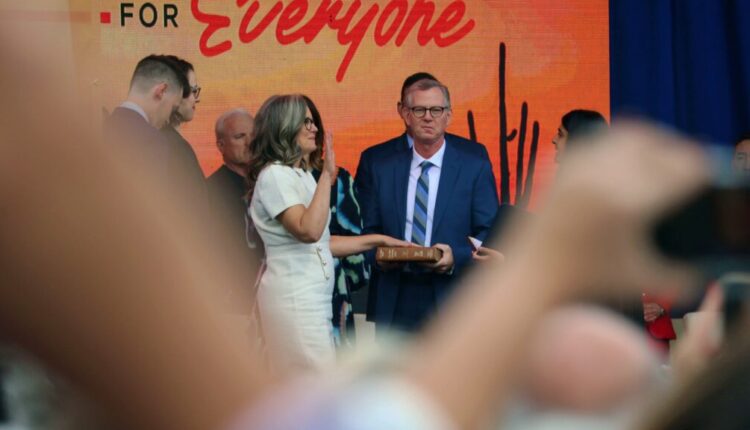 On a chilly, cloud-covered Thursday morning at the Arizona Capitol, hundreds of wellwishers and spectators gathered to watch the ceremonial swearing in of the state’s newly elected top officials, including Democratic Gov. Katie Hobbs.

The theme of the morning, at least for several of the speakers and incoming Democratic officials, was a commitment to leaving behind divisive rhetoric and working across the aisle to get things accomplished.

“Your voice and the voices of your fellow citizens were heard loud and clear,” Hobbs said during her inauguration speech. “You rejected those who seek to divide us, to build a better Arizona for everyone.”

Officials and lawmakers don’t have much choice but to work together if they want to pass legislation, with Republicans in control of the state Legislature and Hobbs in the governor’s seat with a veto pen.

Hobbs’ Republican opponent, Kari Lake, a Trump-endorsed 2020 election denier, has still not conceded, even though she lost by more than 17,000 votes. In December, Lake lost a lawsuit challenging the outcome of the election that she claims was stolen from her. Last week, she appealed that decision.

A small group of pro-Lake protesters could be heard shouting the words “criminal” and “traitor” at Hobbs from outside the Capitol grounds during the ceremony.

The inaugural ceremony featured nods to the various cultures that play significant roles in Arizona, with prayers from a Rabbi and a preacher, a speech from Gila River Gov. Stephen Roe Lewis and performances by a Mariachi band and Native American dancers.

The event was funded by private sponsors, and Hobbs has not disclosed the identities of those sponsors or the amounts they donated, going against a campaign pledge of transparency, the Arizona Republic reported.

A video board displays Gov. Katie Hobbs’ message of unity at a public swearing in ceremony on Jan. 5, 2023. Photo by Jerod MacDonald-Evoy | Arizona Mirror

During her speech on Thursday, Hobbs promised to find common ground with lawmakers and to “work with people and not political parties.”

Hobbs promised that her door will always be open to Republican legislators who are “ready to make real progress,” but she also warned that those chasing conspiracy theories, pushing the agendas of special interests and attacking the rights of other Arizonans would get nowhere.

“If we move past divisiveness and partisanship, I believe we will build an Arizona for everyone, with open hearts and open minds,” she said.

“I don’t know if that was necessary to say,” Kavanagh said. “It’s certainly not starting things off ‘kumbaya.’”

Kavanagh was also disappointed that Hobbs’ speech lacked specificity, adding that, as the newly appointed Senate Appropriations Chair, he would have appreciated more insight into her plans for the budget. He noted that Hobbs may provide a more in-depth overview on Jan. 9, when she delivers her first State of the State speech.

Lamenting the icons who sought bipartisanship

Mayes, who won her race by a mere 280 votes out of some 2.6 million cast, lamented that the late U. S. Sen. John McCain and former Attorney General Grant Woods, who died last year, were missing from the inauguration ceremony. Mayes said she believes the state needs to get back to the spirit of their leadership, with less vitriol and a value for country over party.

Mayes said she intends to work toward making Arizona safer by securing the state’s ports of entry, fighting fentanyl trafficking and abuse, and prosecuting elder abuse and consumer fraud.

“I promise to lead with integrity, because that’s what the people of Arizona deserve,” she said. 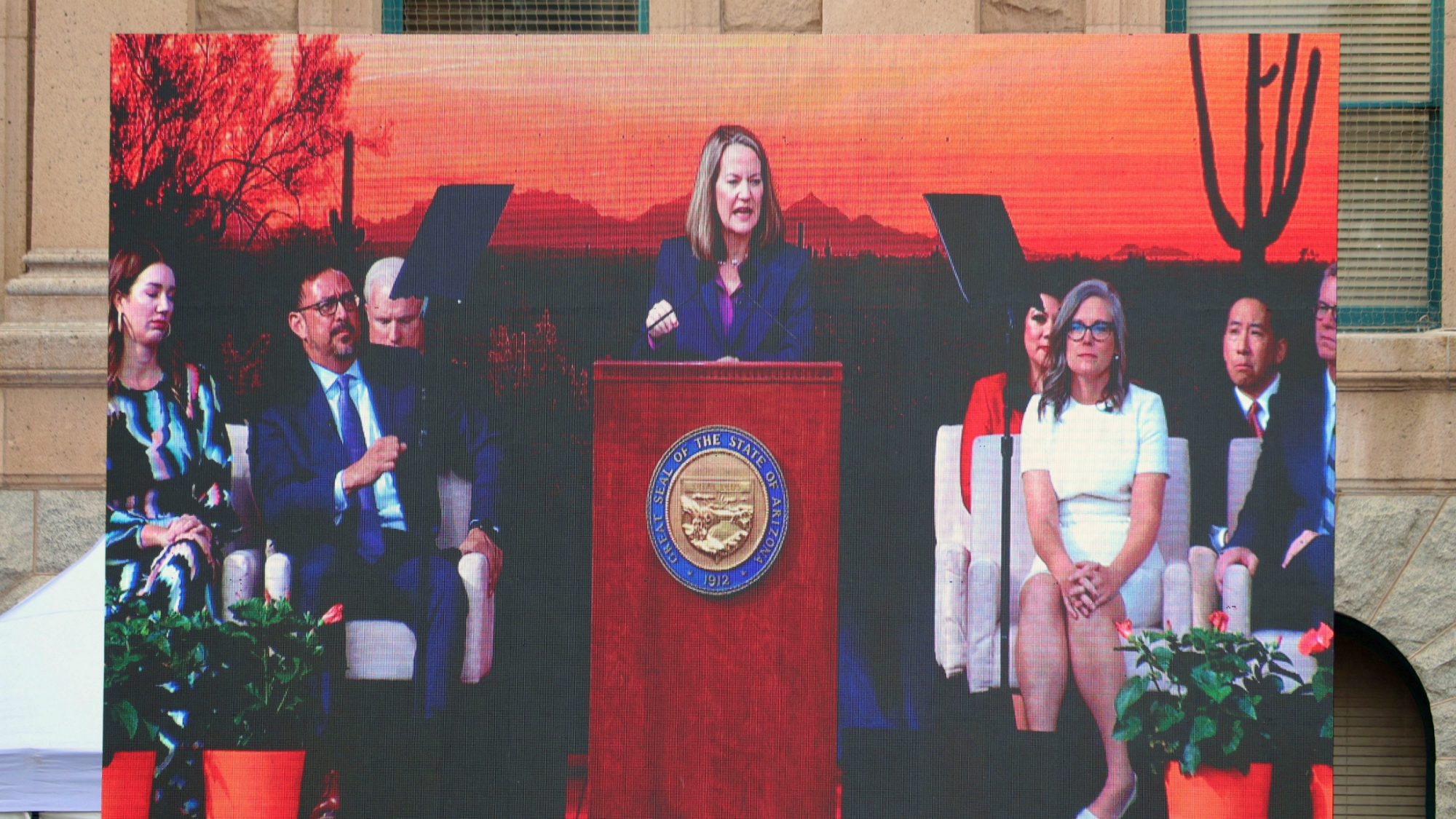 Attorney General Kris Mayes is displayed on a videoboard as she speaks at a public swearing in ceremony on Jan. 5, 2023. Photo by Jerod MacDonald-Evoy | Arizona Mirror

Fontes praised Maricopa County Recorder Stephen Richer and County Supervisor Bill Gates, who have become targets for election fraud conspiracists, for fulfilling their duties in carrying out the midterm election amid harassment, allegations of fraud and threats.

He added that, if Arizonans commit to supporting their election officials, “we will continue to show that our Democratic Republic is still humanity’s brightest beacon.”

Fontes told the Arizona Mirror that he plans to support election workers by lobbying the legislature to include them in statutes that worsen the punishments for people who harm public service workers.

“Arizona’s got statutes that specifically increase penalties if you attack a police officer or judicial officer, for example,” he said. “I want to include election workers in that statute so they can have higher protections, as well.” 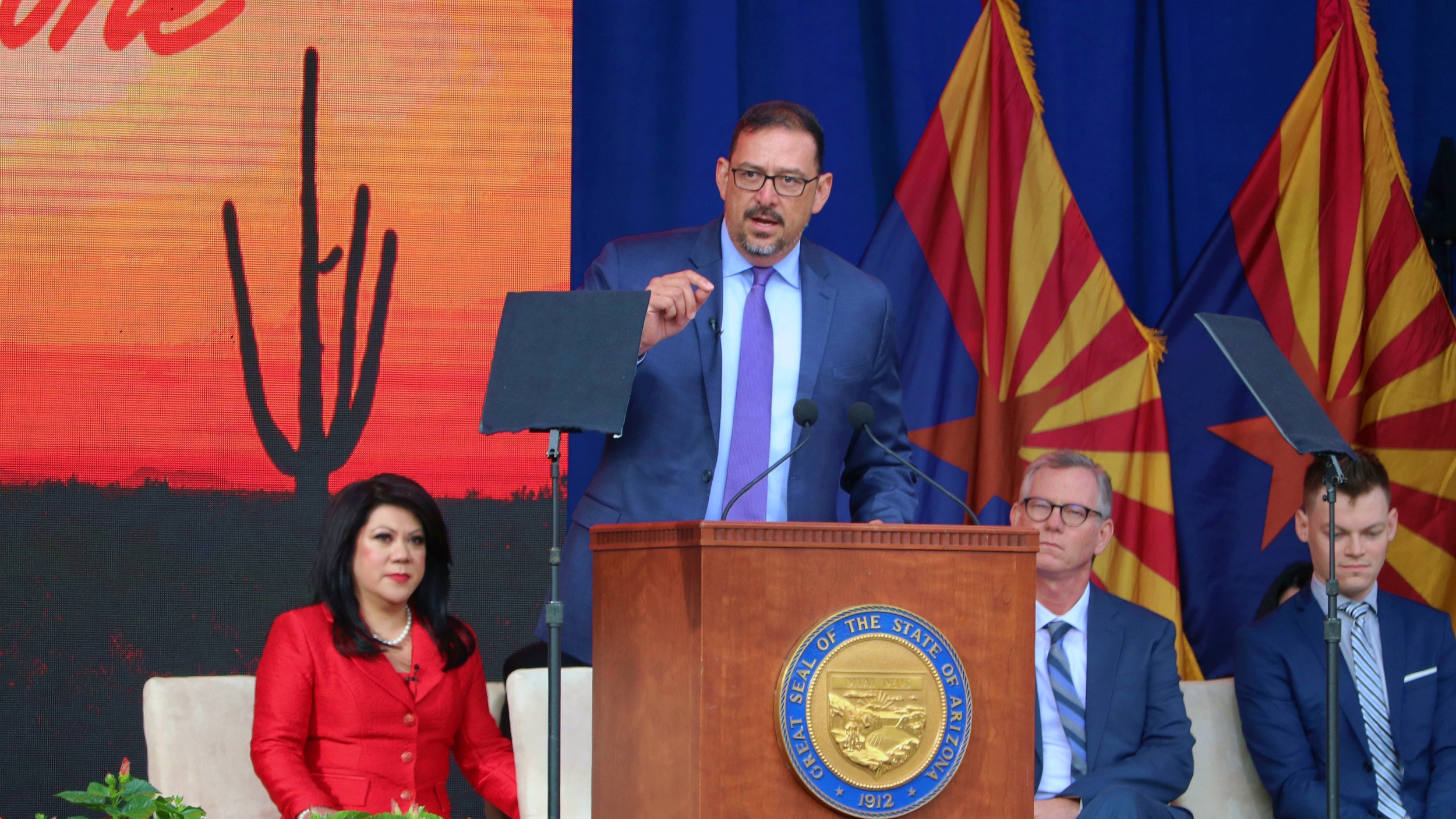 Secretary of State Adrian Fontes speaks at a public swearing in ceremony on Jan. 5, 2023. Photo by Jerod MacDonald-Evoy | Arizona Mirror

Yee spoke on Thursday of the accomplishments made during her previous term in the office, including a 75% increase in the earnings of local governments and the doubling of the state’s total assets to $30.9 billion.

“I hope that we will lead with civil discourse, honor and integrity,” she said of herself and the other newly elected officials.

Horne promised in his speech to make Arizona’s Department of Education a service organization that is focused on improving student test scores so that Arizona students can compete in the global economy.

He also said he wants to see a “return to traditional discipline in schools,” but didn’t elaborate on what exactly he meant by that.

“Students can’t learn if others are free to disrupt them,” he said.

He added that, although he and Hobbs aren’t from the same party, he knows that they both want to improve education for students in Arizona.

During the ceremony on Thursday, the Capitol grounds in Phoenix were filled with citizens and lawmakers, waving Arizona flags and taking selfies, along with a large security presence.

The Arizona Department of Public Safety deployed three of the 37 drones in its inventory during the event. The agency also had a mine-resistant vehicle, commonly referred to as an MRAP, for their SWAT team on standby, as well as a long-range acoustic device used to disperse protesters.

Disruptions by fringe elements who believe that the election was “stolen” was not just relegated to outside of the fenced perimeter of the inaugural event. Inside, a local misinformation peddler for the defamatory right-wing website The Gateway Pundit chased down Mayes and Fontes, asking them leading questions about the election.

Democrats buoyant about the Hobbs era

Sen. Raquel Terán, the head of the Arizona Democratic Party and the newly elected Democratic leader in the state Senate, said she was heartened by the speeches given by her fellow party members. The important thread through each of them was that the Democratic Party is focused not on conspiracy theories, but on the needs of the state.

Sahuarita Democratic Sen. Rosanna Gabaldón echoed Terán, saying that she felt hopeful about the state’s future under new leadership. She dismissed concerns that Hobbs’ warnings toward conservative extremism might complicate bipartisan efforts in the legislature, saying that teamwork is part of the job.

“We all work independently but, at the end of the day, we come together united, grounded in reality, ready to govern,” she said. 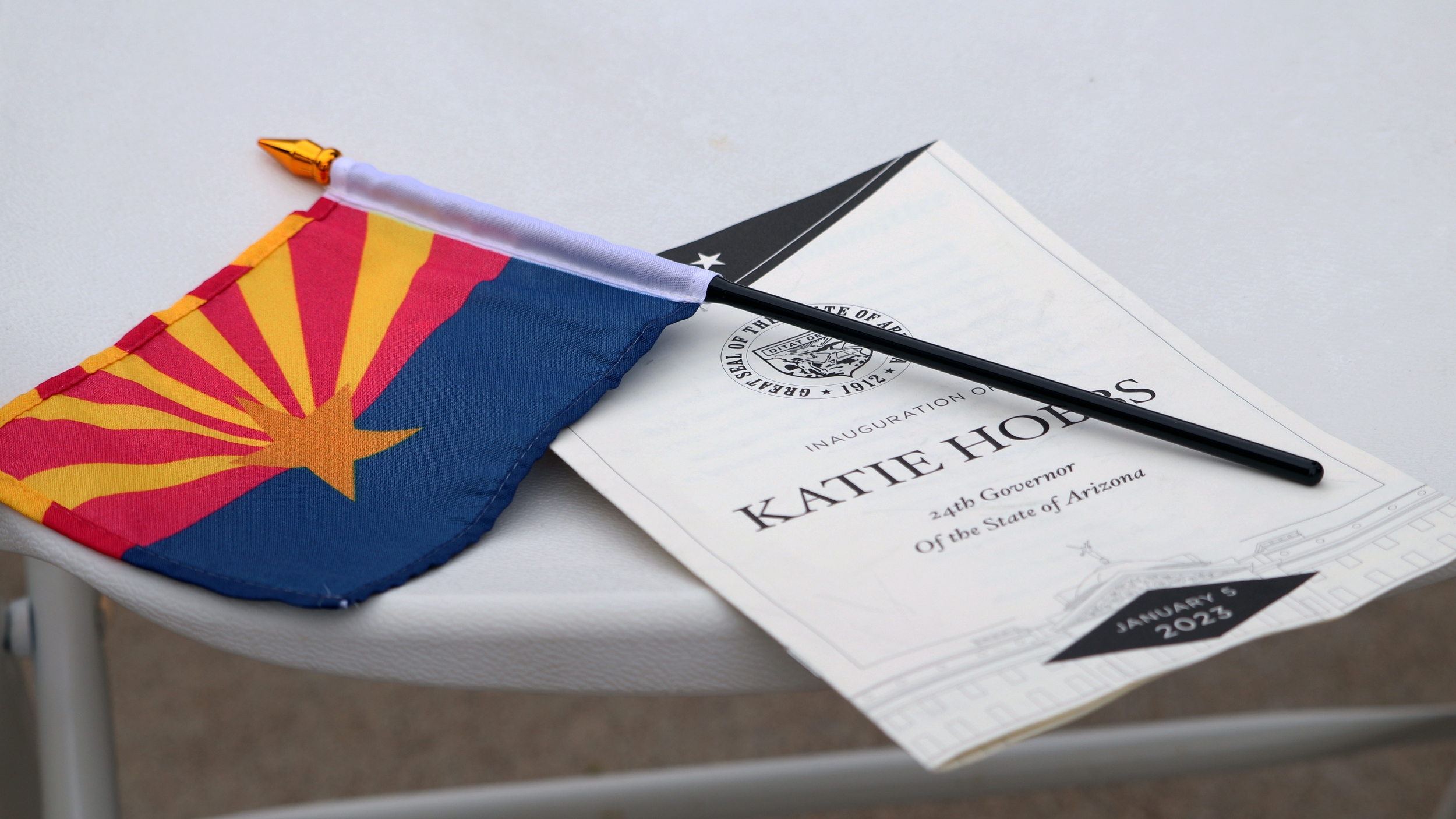 A flag and a program on a seat before the public swearing in ceremony on Jan. 5, 2023. Photo by Jerod MacDonald-Evoy | Arizona Mirror

“If we accept Gov. Hobbs’ calling to improve and change, and serve in a more pluralistic, collaborative way, sure we’re going to disappoint the extreme partisans among us,” Giles said in his speech to the gathered crowd. “But that’s the only way that we can adequately rise to the challenges that face us.”

Vincent Peterson, 15, said it was rewarding to attend Hobbs’ inauguration after knocking on 274 doors campaigning for her.

“I just hope that she will invest more in public education,” he said, adding that he knows it will be difficult with a legislature controlled by Republicans. “I hope that there will be some room for compromise.”

Terry Kilwein, 63, and Vicki Belon, 62, snagged seats at the back of the Capitol plaza, but their distance from the main event didn’t dampen their enthusiasm. Their smiles were wide as they posed in a selfie with the stage in the background before the celebration began.

“I’m excited to have a governor who represents all people and puts them before politics,” Belon said. “These have been crazy times, and we’re excited to see some stability and normalcy. We’re happy that politics got saner.”