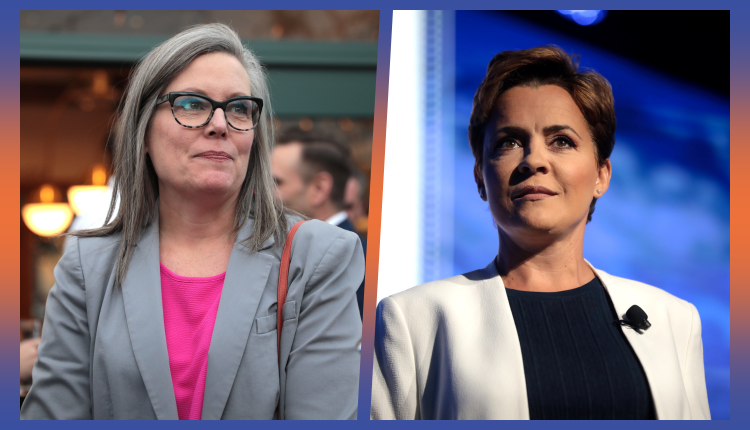 While Republican gubernatorial candidates Kari Lake spends her days throwing barbs on Twitter at her Democratic opponent Katie Hobbs, and Hobbs does her best to avoid interacting with the media, their actual policy plans might be lost on voters.

Both have released detailed education policy plans that, if implemented, would affect the more than 1.1 million children who attend public schools in Arizona, along with their families — and the future of the state.

The Arizona Mirror reached out to both campaigns to get details on subjects that one candidate covered in their published policy plan and the other did not. Lake’s campaign did not respond and Hobbs’ provided limited answers. The following are some of the highlights of the candidates’ education plans, as published by the candidates.

Hobbs: Wants to end the cycle of the Legislature providing funding to schools in the annual state budget and then the schools not being able to spend that money because of the Aggregate Expenditure Limit. The AEL, which voters added to the state constitution in 1980, is a shared annual spending limit among all the schools in the state. Once districts reach that shared limit, they cannot spend any more money in that fiscal year — even if it’s in the annual budget.

Hobbs proposes ending the AEL and creating new funding for the Extraordinary Special Education Needs Fund, which would help with big costs that districts are required to provide to students with disabilities, such as specialized vehicles or dedicated nurses.

Hobbs: Wants to raise teacher pay in Arizona to put it on par with the national average. That would mean a $14,000 pay raise for the average teacher. She also wants to ensure that teachers and their families have access to affordable health care coverage. Arizona is currently facing a teacher shortage, with around a quarter of teaching positions going unfilled a month into the school year. Pay for teachers in Arizona is generally among the lowest in the nation.

Lake: Says that schools are receiving more funding than ever but teacher pay remains relatively flat when adjusted for inflation, while administrator pay has spiked. Because of this, she believes that districts can’t be trusted to increase teacher pay even if the state provides money for it. Instead, Lake wants the state to provide direct bonus payments to teachers.

“There’s nothing I’d like more than to have our excelling teachers make exponentially more money through their bonus pay,” Lake said in her plan. “If they are performing well and helping our kids improve, they should be compensated accordingly.”

Hobbs: Wants to fully fund the Arizona Teachers Academy and to allow counselors and social workers into the program. She also wants to expand mentorship programs for young teachers and plans to build permanent financial support for Northern Arizona University’s Teacher Residency Program. She also proposes expanding resources to train more teachers in resources into teaching Science, Technology, Engineering and Math, or STEM.

Hobbs: Wants to help expedite repairs and maintenance of school buildings by sidestepping bureaucracy at the Arizona School Facilities Oversight Board.

“By fixing our school buildings, streamlining and cutting government red tape, and providing robust funding, we can ensure a safe environment that is conducive to learning and lower the costs of long-term maintenance,” Hobbs said in her plan.

Hobbs: Believes in giving parents the choice between public district schools and public charter schools, but believes that “Charter school operators should not be able to line their pocketbooks by diverting public education funding into for-profit companies or personal investments.”

Lake: Proposed a plan that she calls “100% backpack funding.” In this plan, parents decide if their child will attend public, private, charter or homeschool, and the public funding follows the child, no matter which kind of school they attend.

“This is 100% school choice, without barriers – you decide what’s best for your kid, and you direct your tax dollars towards the educational opportunities that fit your family’s needs,” Lake said in her plan.

In Lake’s plan, funding for one student could be split between two institutions, allowing them to attend one school for most classes, but to enroll in advanced courses at another school.

Hobbs: Has not published her own plan but told the Arizona Mirror that “Lake’s plan to put government cameras in classrooms to spy on our children and teachers is so blatantly out of touch with the will of most Arizonans that even her own party has shunned it. Not to mention the way it would exacerbate our deepening teacher shortage crisis.”

Lake: Believes that classrooms have become places for leftist ideological indoctrination. She wants to expand the state’s Parents Bill of Rights, based on a similar bill recently passed in Florida. The Florida law disallows instruction on sexual orientation and gender identity for students in kindergarten through third grade.

“Put simply: you have a right to know what your kids are being taught, how they’re being taught, and to make any medical decisions for minor students without interference or obstruction from your school, district, or the State of Arizona,” Lake said in her plan.

Hobbs: Plans to incrementally phase in free, voluntary universal preschool, beginning with communities that she says need it most. Hobbs also wants to increase voluntary participation in full-day kindergarten, funded by the state. Students in Arizona are currently not required by law to attend kindergarten and the state only funds programs for half-days.

Hobbs: Promises to dedicate resources to increase the number of child care providers available in Arizona and to expand child care assistance to families that need it.

Lake: Wants to ensure that schools don’t go back to universal masking and virtual learning because of COVID-19, which she says harmed student development. Students in Arizona and across the country have suffered significant learning loss as a result of the pandemic and virtual learning. She also wants to get rid of “social emotional learning” in schools, which she says teaches the traits of Critical Race Theory.

According to the Arizona Department of Education, social emotional learning is “the process through which children and adults understand and manage emotions, set and achieve positive goals, feel and show empathy for others, establish and maintain positive relationships, and make responsible decisions.” Critical race theory is a concept mostly taught in law schools and graduate programs that says race is not biological, but a social construct embedded in the institutions, structures and laws of society. There is no evidence that critical race theory is being taught in Arizona K-12 schools.

Hobbs also seeks to expand the Arizona Promise Scholarship Program to allow students who transfer from community colleges to universities to participate. The program provides financial assistance to low-income students who attend Arizona’s public universities. She also wants to provide “consistent and sustainable funding for in-state resident students” and to ensure that Dreamers receive in-state tuition.

Lake: Has a goal to create a statewide system of institutions, with a focus on rural Arizona, that provide technical training in areas such as construction, automotive repair, plumbing and welding, as well as coding and high-tech manufacturing. She wants these institutions to work with business and industry leaders. Lake wants every high school student to have the opportunity to decide between a four-year college track or career and technical education.

Lake: Wants to replace the annual state-mandated AZMerit test testing with the National Assessment of Education Progress for only students in the 4th, 8th, and 12th grades. That will mean that students will only have to take three standardized tests during their K-12 education, instead of annual testing that is currently required, beginning in third grade.

Hobbs: Has not published any plan, but told the Mirror that ”the extreme ‘curriculum’ she (Lake) wants to import from another state would only inject partisan politics into our classrooms, which is the last thing parents, students, and teachers need.”

Lake: Wants to stop schools from being “factories to churn out deliberately mis-educated progressive activists.” Lake plans to align Arizona state standards to the Hillsdale 1776 curriculum, partially in response to the use of “The 1619 Project” curriculum. “The 1619 Project” was created by the New York Times Magazine and looks at the legacy of racism in the United States. Hillsdale College is a private conservative college that distributes its curriculum for free to schools in the United States. It promotes the idea of American Exceptionalism and teaches that progressivism goes against the ideals that the United States was founded on, though critics say it is propaganda disguised as history.

“Despite what the radical indoctrinators peddling this garbage will say, the United States was not and is not built on a foundation of racism,” Lake said in her plan “We do not need to view all outcomes as a result of race. And telling students that they are either oppressors or oppressed based on pigmentation is evil. We won’t tolerate it, and will root out this hateful indoctrination, no matter how many times practitioners try to re-brand their garbage ideology.”