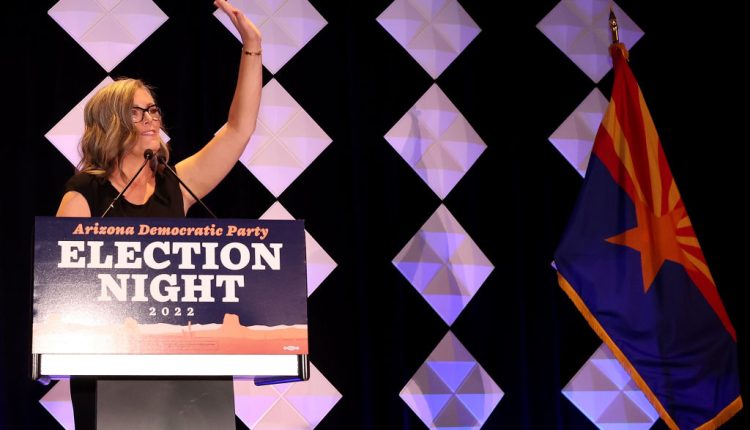 Katie Hobbs will be Arizona’s next governor • Arizona Mirror

Democrat Katie Hobbs has been projected as the winner of the Arizona race for governor after six days of vote counting in a tight race that left Arizonans and others across the country on the edge of their seats.

The Associated Press declared Hobbs the winner over Republican Kari Lake Monday evening after Maricopa County, the state’s most populous county, added around 72,000 new ballots to its count.

In a close race that Lake was favored to win, Hobbs emerged victorious when late-arriving early ballots in Maricopa County failed to propel Lake to a come-from-behind victory, as the Republican and her allies had guaranteed would happen. But those predictions failed to materialize, and Hobbs, her lead bolstered by large margins in Pima County early ballots, was able to hold off Lake’s late gains.

After ballots were tallied across the state Monday, Hobbs maintained a 20,481-vote lead. With less than 15,000 ballots left to count in Maricopa County — about half of which are provisional ballots, many of which won’t ultimately be counted — there isn’t a path to victory for Lake.

“This isn’t just a win for Democrats, this is a win for every single Arizonan,” Arizona

Democratic Party Chair Raquel Terán said in a statement. “Secretary (of state) Hobbs will be a Governor for every family, she will put Arizonans first, and she will work to address our state’s biggest issues such as rising costs and public education. Thank you Arizona for rejecting extremism and putting the dignity of our state first.”

If Democrat Kris Mayes is elected attorney general, it will be the first time since 1972 that Democrats have taken the top three statewide races in Arizona.

Democratic candidates across the country have fared much better than expected, especially in a midterm election with a president who is not particularly popular, according to polls.

As more Democratic candidates were declared the expected victors over the weekend, and other races remained close, Republican candidates and their supporters urged voters to check with the county to ensure their ballot was accepted and to fix any issues if it wasn’t.

Maricopa County released results from 72,523 voters Monday evening, meaning that around 98.6% of ballots in the county have been counted.

There were around 7,600 Maricopa County ballots left to be cured as of Monday, meaning signatures on the envelopes didn’t match the ones on file for the voter or there is some other issue that the voter needs to fix before the deadline to do so at 5 p.m. Wednesday. Elections workers try to contact these voters to fix the issues.

Republicans also continued to sow doubt in Arizona elections over the weekend and into Monday, including the Arizona Republican Party, which claimed that printer issues that caused problems with vote tabulation at about 70 vote centers in Maricopa County disproportionately impacted Republicans. An analysis by the Washington Post found that was untrue.

“Voter suppression reared its ugly head in Arizona at the hands of Maricopa County,” Chairwoman Kelli Ward said in a Nov. 13 statement. “Some wonder if it is just incompetence, while others question malfeasance. This cannot simply be accepted. It must be corrected before this election is certified. Exit polling shows that Republican voters were disproportionately disenfranchised by Maricopa County’s incompetence.”

Ward urged those who felt they had experienced voter suppression to file a complaint with the Arizona attorney general’s office.