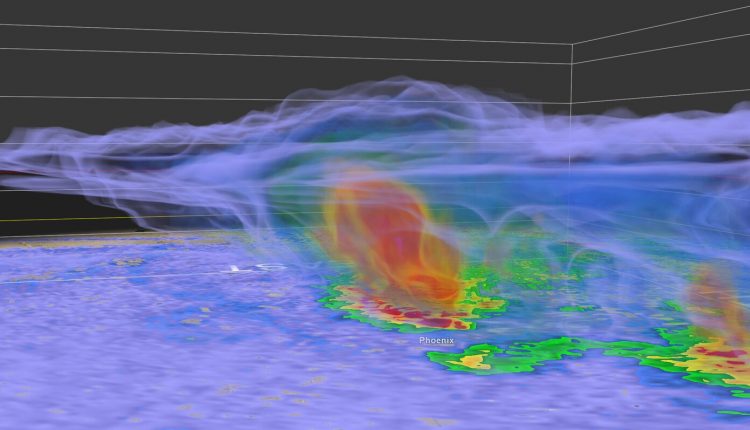 In an extremely odd meteorological setup, the remnants of a tropical storm are delivering flooding rains and damaging winds to the desert. Broad swaths of Arizona, Nevada and California are dealing with downpours, and could be facing severe thunderstorms again Monday night.

While the low pressure system that once was Tropical Storm Kay lost its tropical characteristics Friday night, some of its leftovers have been meandering across Southern California for days.

The moist flow around the storm remnants has fueled heavy thunderstorms over central and northern Arizona, which unleashed a 76 mph wind gust in Phoenix on Sunday, more than 3.3 inches of rain near Tucson and towering plumes of dust.

That was just the first round of heavy and flooding rains, with another bout of moisture-loaded thunderstorms likely to affect Arizona and Nevada on Monday afternoon and night.

Flood watches blanket the majority of Nevada and Arizona, including Phoenix and Las Vegas. Weekend mudslides in the mountains of Southern California caused two dozen vehicles to become stuck in mud in the vicinity of Lake Hughes, and Interstate 8 was reportedly a minefield of boulders and debris.

Improving conditions are expected to kick off the workweek in Southern California, but Arizona, Nevada and New Mexico have another day or two before they’re in the clear.

“We saw a complex of thunderstorms move out of southeastern Arizona and produce a lot of outflow winds along it,” said Mark O’Malley, a meteorologist at the National Weather Service in Phoenix. “Thunderstorms that developed along it produced a footprint of strong winds across the Metro last night.”

The thunderstorms dumped up to 3.36 inches of rain south of Tucson before congealing into a line that kicked up a “haboob,” or dust storm, that brought reduced visibility as it rolled into Phoenix after dark. The haboob formed as winds along the thunderstorms’ leading edge crashed to the ground, stirred up the wall of dust.

“That’s not uncommon from where these thunderstorms originated,” O’Malley said.

An 86.3 mph gust was reported at 9:53 pm local time from an automated sensor at Phoenix’s Sky Harbor International Airport, but O’Malley and his colleagues are suspicious about that reading.

“The 86 mph is erroneous,” he explained. “We entered a temporary gust of 76 mph that was based off of a tower 50 meters tall, but even that is a little more than we think was happening at the ground. We’re sending technicians out to inspect the equipment … it’s been suspect lately.”

A gust to 76 mph would be more in line with a 75 mph gust observed at Mesa Gateway Airport during the same storms.

“We called [Sky Harbor] and there’s no damage,” said O’Malley. “There are a few trees down out there, but the airport has nothing.”

What’s next with Kay’s remnants

Monday marks the last day of widespread afternoon and evening showers and thunderstorms in the Southwest. Most will flare up during the heat of the day and linger until a few hours after dark. Las Vegas could see an isolated flooding downpour. The city averages 4.18 inches of precipitation per year, including less than a third of an inch in September. Given the compact, sandy surface, the ground simply won’t be able to absorb much rain.

Eventually, Kay’s remnants will relinquish their grip on the Southwest.

“Thunderstorm chances linger tomorrow, but the area of ​​focus will be shifting east as the pattern progresses,” wrote the National Weather Service in Tucson in their online technical forecast discussion. “By Wednesday, third air begins to take hold of the region and chances drop off by Thursday area wide.”

While you were sleeping, FC Tucson pulled off its biggest victory of the 2022 season | FC Tucson