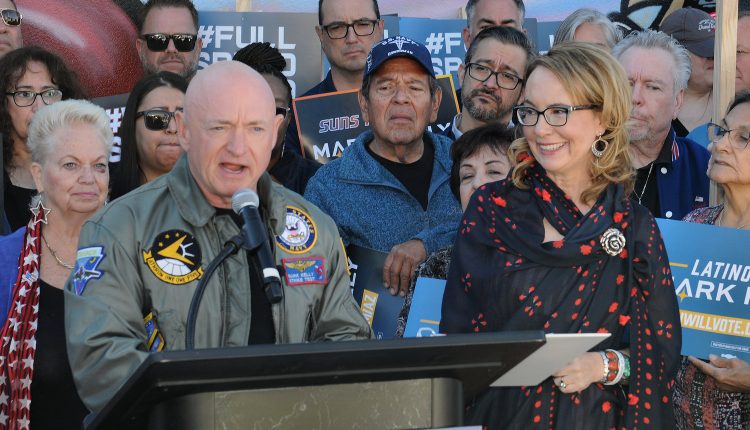 PHOENIX – Sen. Mark Kelly promised to “put our state ahead of politics” as he thanked supporters Saturday for electing him to a full six-year term.

In a victory speech in the courtyard of a Mexican cafe in Phoenix, Kelly repeatedly brought up the name of John McCain whose seat he was elected to in 2020 to fill the last two years of McCain’s term after he died in office.

Kelly, whose campaign barely mentioned he was a Democrat, said he is following the “legacy of building bridges” of McCain, a Republican, who was known for bucking party orthodoxy.

Kelly’s victory over Republican Blake Masters puts the Democrats within one vote of being able to retain control of the Senate. But to get to 50 – with Vice President Kamala Harris able to break a tie – Democrats need to win either of the current outstanding races in Nevada and Georgia.

He wasn’t the only Democrat in a statewide race who has clinched victory even as votes are still being counted.

Adrian Fontes was outpolling Republican Mark Finchem in the race for secretary of state by more than 118,000 votes.

Finchem has yet to concede, saying there is a path to victory.

In his speech, Kelly criticized those who focus on divisions, though he didn’t mention former President Donald Trump or his followers by name.

“We’ve seen the consequences that come when leaders refuse to accept the truth and focus more on conspiracies of the past than solving the challenges that we face today,” he said.

Neither has Trump, who in a post on Truth Social demanded a new election. He said that “idiot, and possibly corrupt officials have lost control of the tainted election in Arizona.”

Kelly said he has not heard from Masters.

“I look forward to talking to him,” he said. “I think this was a very competitive race, and he ran a good race and ultimately the voters made a decision.”