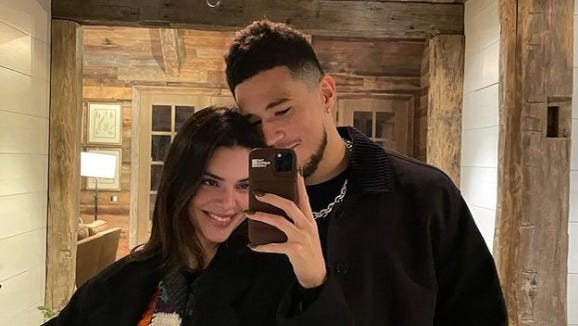 For the seemingly on-and-off again celebrity couple Kendall Jenner and Devin Booker, it all started and now has reportedly ended in Arizona.

The Phoenix Suns star and model-slash-tequila-brand-founder who comes from Kardashian family fame have supposedly ended their more than two-year relationship due to busy schedules, according to People. This is the second time in five months that outlets have reported that Booker and Jenner have called it quits. Following the previous breakup report on June 22, the two seemed to be on good terms and were photographed out together within the week.

Jenner and Booker continued going on trips together and attending events — including a wedding, New York Fashion Week and the US Open — in the months after the alleged breakup and leading up to this latest purported breakup. If this development is true, it would mean that Jenner and Booker’s relationship was bookended by trips to northern Arizona.

Did Kendall Jenner and Devin Booker break up?

Just as they did after the June breakup report, Booker and Jenner continue to follow each other on Instagram, and neither has publicly addressed the news. That means all we have to go off is the “several sources” who confirmed the split to People as well as Us Weekly.

According to People’s reporting, the couple “quietly” broke up in October. However, the two appeared to be friendly at least through Booker’s birthday on Oct. 30. That day, Jenner posted a photo of the two looking away from the camera at an event on her Instagram Story.

Everyone loves bookers:This 4-year-old Kardashian clan member is his #1 fan

A couple days earlier, Booker shared that the two were enjoying an “OFFday in Flagstaff” in his Instagram Story. (This was the day after the Suns beat the Golden State Warriors 134-105.) On Oct. 26, Booker posted videos of himself and another person — who looks like Jenner from the back — walking with his dog, Haven, in the woods.

Rewinding to the start of Booker and Jenner’s relationship, the two were first spotted together in public in April 2020 while on the road to Sedona — and if recent reports are correct, one of the couple’s last trips may have been to Flagstaff.

It seems that things have come full circle for Jenner and Booker.