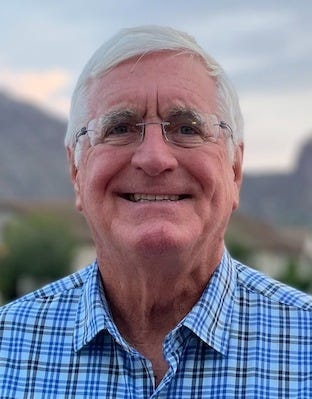 Keno Hawker crossed the finish line on October 21, 2022, with family by his side. Born on July 24th, 1946 in Janesville, WI, Keno was the youngest of two boys in an active and loving family. An athlete like his brother, Dennis, Keno was a multiple sports star in high school and college, lettering in football, basketball, and track. Keno studied business and economics at University of Wisconsin – Stevens Point and received an MBA from University of Wisconsin – Madison. While in Madison, Keno discovered a lifelong passion for economics and also for sailing, applying his economic philosophies later in his public service and using his sailing skills throughout his life on boats from a 16 ft. Hobie-Cat to a 48 ft. Catalina. Keno was drafted into the US Army during the Vietnam conflict. While serving his term in Ft. Campbell, Kentucky, Keno married Marilyn Evans, with whom he had two children, Ryan and Shelby. They raised their family in Mesa, AZ, where Keno started a successful asphalt products, sales and application business. Keno loved life in Arizona. From owning cabins at Hawley Lake, Rainbow Lake and Haigler Creek, to becoming an instrument-rated pilot and flying his airplanes out of Falcon Field, racing his 400 Yamaha motorcycle in the desert, hiking to the top of Four Peaks & Weavers Needle, or just enjoying time on his family’s Apache Lake houseboat. Keno’s athleticism continued throughout his lifetime. He competed the Alcatraz triathlon twice. At age 39, he bicycled from San Diego, CA to Jacksonville, FL. Keno was also an accomplished juggler and unicycle rider. He enjoyed scuba diving around the world. With the success of Keno’s business came the opportunity to serve his community, a time when he also met his wife, Mary Jo Vecchiarelli. Keno served in leadership positions with Mesa Baseline Rotary Club, Mesa HoHoKams, Mesa Chamber of Commerce, ten years as a Mesa City Councilmember, and eight years as Mayor of Mesa from 2000-2008. As Mayor, Keno framed the path for a generation of sustainable growth in Mesa and the East Valley, including the expansion of Phoenix-Mesa Gateway airport, the 2002 Mesa General Plan, and passage of Prop. 400, which together created long-term infrastructure for transportation, mass transit, job creation, and economic growth. Keno first met Penny when she presented a zoning case before the City of Mesa 33 years ago. Keno voted against the case but would later marry and find lasting love with the presenter. During his active retirement, Keno enjoyed traveling the world with Penny, spending time with grandchildren and gardening at home in Paradise Valley, Flagstaff, or their cabin in Young, AZ. Keno is survived by his wife Penny Wolfswinkel Hawker of Paradise Valley, AZ, son Ryan Hawker (Renee Fry) of Quincy, MA, daughter Shelby Hawker of Brooklyn, NY, stepchildren Erin Kolb (Rick), Clifford Jenkins (Lauren), and grandsons Beto Brea, Liam Hawker, Dillan and Wylan Kolb. He was preceded in death by his father, Earle, mother, Genella, and brother, Dennis. A Celebration of Life will be held on Sunday, November 13th at 1:00pm, at the Mesa Arts Center Virginia G Piper Theater. Please consider making a donation in Keno’s honor to Mesa United Way.

Published in The Arizona Republic

Streak of light over Phoenix sky came from SpaceX launch