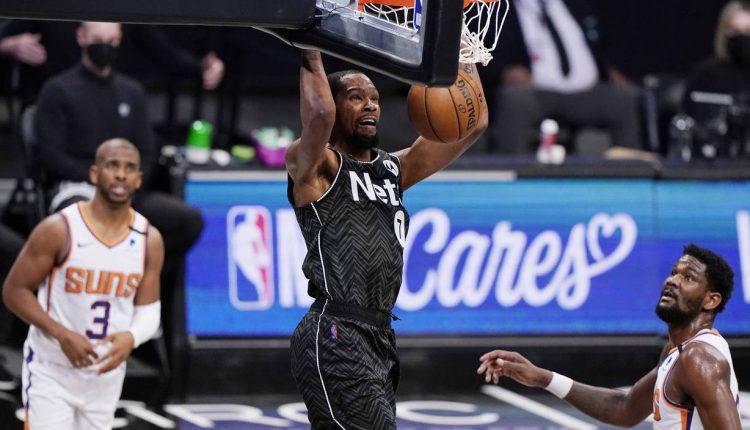 The big-money NBA players who could be on the trading block or are in restricted free agency appear unlikely to have their futures resolved as Las Vegas Summer League play is set to begin.

Let’s start there, with the biggest of the three names.

No trade packages for Durant, according to Bleacher Report’s Jake Fischer, have come close to making Brooklyn feel satisfied.

For the Phoenix Suns, who reportedly are atop Durant’s wish-list, even a willingness to offer as many draft selections as they’re allowed to give isn’t enough. That’s before considering what the Nets likely want to receive.

“Deandre Ayton, Mikal Bridges, Cam Johnson and five picks still isn’t enough to me for KD,” one general manager told Bleacher Report, referring to a direct trade for Durant by the Suns.

Even bringing in a three-team deal — say the Indiana Pacers, who could have interest in Ayton — might not bring a return to please Brooklyn.

Pacers center Myles Turner has not generated significant traction on the trade market this offseason, sources said. A theoretical trade return of Turner, multiple Suns wings and draft capital still wouldn’t appear to satisfy the Nets, according to sources.

Elsewhere, it’s hard to reason where another favorite landing spot for Durant, the Miami Heat, would get enough to pull arguably the most talented NBA player to ever request a trade from his current team.

The Toronto Raptors have entered the picture because of their glut of current young talent, and whether that is with interest in landing Durant or just to join a multi-team deal to acquire Ayton via a sign-and-trade remains to be seen, reports fisherman.

Of important note regarding Toronto: Multiple sources with knowledge of the situation say the Raptors are unwilling to part with reigning Rookie of the Year Scottie Barnes.

Other trades this offseason have painted more of a picture about what the Nets should be comfortable taking back in a Durant trade especially.

The Atlanta Hawks giving up the contract of Danilo Gallinari, three valuable first-round picks and another pick swap to the San Antonio Spurs for guard Dejounte Murray gave a taste of how much Durant could cost.

Then the Utah Jazz getting a massive haul for center Rudy Gobert reset the market completely — the Minnesota Timberwolves gave up two veterans, three younger players and four first-round picks with an additional pick swap to grab Gobert.

Most of the picks in both the Atlanta and Utah trades were unprotected.

Point being, it appears more and more likely that Durant and Irving could be forced to wait on finding a new home, perhaps even into the regular season. That all could string out Ayton’s restricted free agency and how Phoenix navigates that.