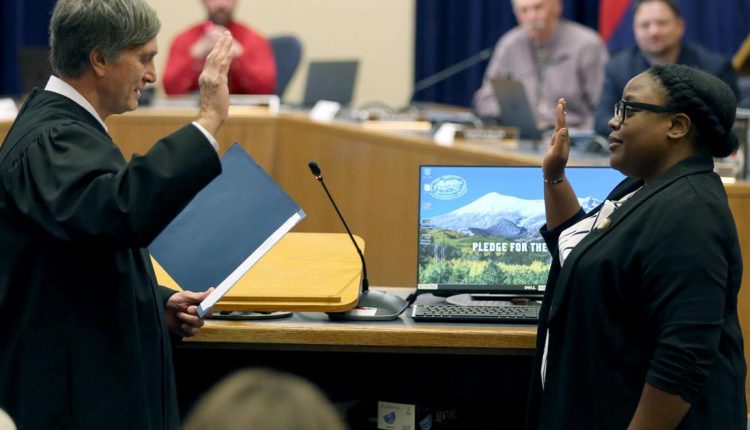 Flagstaff City Council made the unanimous decision on Tuesday to appoint Khara House as an interim council member, filling the seat vacated when former Vice Mayor Becky Daggett resigned to campaign for the office of mayor.

House will serve as a member of city council until Dec. 20, when the newly elected members officially take office.

House was one of 14 total candidates who applied to fill the seat. She has a decorated history of public service within the City of Flagstaff. She has served on the city’s housing commission, assisted in the passage of the city’s 10-year housing plan and is a two-time recipient of the Arizona Multihousing Association Tribute Awards.

House is president of the Coconino County African Diaspora Advisory Council, vice president for National Alliance on Mental Illness-Flagstaff, and sits on the boards of Flagstaff Shelter Services, the Southside Community Association and the Lived Black Experience Project Steering Committee.

House was given the Mayor’s Key to the City Award in 2020 in recognition of her community service. Alongside her work in the community, House holds a career as director of community engagement for Bella Investment Group.

“I want to serve,” House said when she first presented her application to the council. “I believe in the power and importance of civic engagement.”

House also spoke to her desire to “consistently recognize diverse voices in this community,” and said that her priorities included housing as healthcare, expanded resources for mental and behavioral health, climate consciousness and deeper empowerment of Flagstaff’s unique neighborhoods.

Council member Regina Salas stated particular excitement to welcome House as “someone who can help us bring unity, cohesion and diversity” to city leadership.

House was sworn into her appointed position by Judge Tom Chotena and met with applause.

The pool of willing and qualified candidates indicated that “the city is in good hands for years to come,” said Councilmember Austin Aslan.

“All the candidates were in the running,” Council member Jim McCarthy said. “Don’t go away. We need you.”

Multiple councilmembers alluded to the upcoming write-in election, in which four open city council seats will need to be filled from a ballot of only two official candidates.

“I certainly do hope that some of you step forward to pursue a seat up here,” Aslan said to the finalists.

During the public participation section of Tuesday’s meeting, McCarthy took to the stand to address a call for public apology that he received following last week’s initial Council appointment proceeding.

The call for apology came from council candidate Eva Putzova, who requested that her application to the interim seat be discussed publicly in the interest of transparency. The discussion struggled to address Putzova’s application directly, as McCarthy commented that “we should note that the candidate created an awkward situation” by requesting public personnel discussion. These comments became the basis for Putzova’s call for apology.

“Just because something is awkward does not mean that it is inappropriate,” McCarthy said in his statement on Tuesday. He maintained that it was his “right to speak openly” during Council sessions, and maintained that his remarks were in line with the discussion and the request made by Putzova.

“When a candidate requests to have their evaluation in public, they are in fact giving permission to have candid comments made about them in public,” said McCarthy.

He concluded his statement with a reconciliatory direct address to Putzova, saying that “you and I vary on approaches, but I that we are both honest and passionate leaders who base our positions on integrity even when we disagree.”