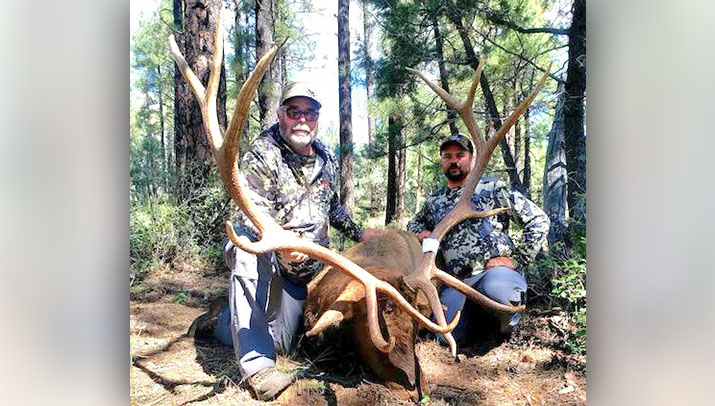 KINGMAN – Drawing an early rifle bull elk tag in Arizona is tough. Some sportsmen wait for two decades or longer just for the opportunity to hunt for one week in northern Arizona for one of the most sought-after big game tags the state offers to sportsmen.

Kingman resident Fred Proudfoot was one of those who decided that he would wait as long as necessary to draw an early rifle tag in one of three units that he hunts. Those units are 7 West, 8 and 9. Fred has hunted at different times in all three units.

This year, with 14 points accumulated for past unsuccessful applications, and having the Hunter Education and Loyalty Point, Fred drew tag number 19 out of 25 offered in Unit 8, which is south of Williams.

This was Proudfoot’s second choice; his first was Unit 9, which also had an early rifle bull hunt.

With tag in hand, Proudfoot sought the advice of former Kingman resident Ryan Chan, who recommended he get a guide if he wanted to take a really good bull. For Proudfoot, that meant a bull that would score at least 360 Boone and Crockett points. That would be a tall order for any outfitter/guide to do. Fred’s previous personal best was a 330-class bull that he took in New Mexico.

Proudfoot was busy with his business and knew he wouldn’t have a lot of time to scout before his once-in-a- lifetime opportunity, so he took Chan’s advice to contract the services of Flagstaff resident Chad Woodruff.

Woodruff is a well-known outfitter and guide who has a reputation of putting his clients on big bulls like Proudfoot was seeking.

With the hunt on the books, Woodruff and several of his guides started to search for a bull that would meet Proudfoot’s expectations.

The monsoon rains had caused the elk to spread out all and the rut was slow to start.

But when the hunt started, Chad and his guys had located some good bulls.

Day one they were out very early and started chasing bugling bulls. And they located several mature 6X6 and 6×7 bulls in the 330 class, but Fred never fired a shot.

Day two started off just like Day one. They started chasing bugles very early in the morning, and once again they saw a number of mature 330-class bulls.

They even saw a nice 7×7 bull who had a harem of cows with him. But still Proudfoot held out, seeking a better bull.

It was now Day three of the hunt. Fred said they once again went on hikes chasing bugles and he was getting tired. Chad and Fred even sat at a waterhole while bulls bugled all around them. However, none of them came in.

However, Fred’s luck was about to change. Fred’s son Mark and one of Chad’s guides found a big 6×6 that Chad had seen earlier when it was still in velvet. The bull’s antlers were hard and surprisingly, none of the points on the huge rack were broken. This was a bull hat Proudfoot was looking for.

Monday morning and it was the fourth day of the seven-day hunt.

The guys were able to relocate the big bull and that started a long hike that saw the bull lead the hunter and guides through three very deep and steep canyons.

Finally, at about 10:30 am, they were able to close the deal. Fred only would have two shooting lanes in the thick forest, one at 101 yards and one at 62 yards. Now he just had to wait and see what the bull was gonna do. But when the bull stepped into one of them at 101 yards, Fred fired a shot from his Remington Ultra Mag rifle.

The shot was true, but the bull didn’t drop, It went another 30 yards and fired a second shot. The bull dropped and the hunt was over.

The big 6X6 bull had main beams that measured 58 inches according to Proudfoot and the spread between the antlers was 50 inches wide. The bull scored 360 2/8 inches as measured by Woodruff. They were almost three miles from the nearest road but they were able to get closer to the bull in a side-by-side UTV.

The trophy will be done by a taxidermist in Lakeside who has done many mounts for Fred in the past. The meat was taken to Flagstaff where it will be processed and will feed the Proudfoot family for a long time.

Proudfoot said “we had a lot of fun but it was a tough hunt, with lots and lots of hiking”

Proudfoot is not sure what his plans are for future elk hunts as he lost all of his bonus points except for the Loyalty and Hunter Education points. He said he may go to New Mexico and try to get tags there. “I really like hunting bull elk,” the veteran hunter said.