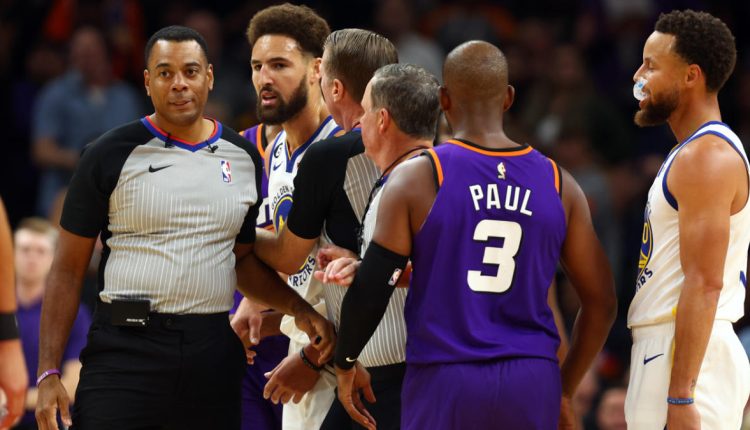 Klay Thompson’s frustrations, simmering for at least a week, boiled over Tuesday night. Salty while missing seven of his eight shots, his emotions went over the edge with a few provocative words from Phoenix Suns star Devin Booker.

The result was Klay getting ejected from a regular-season game for the first time in his NBA career and trudging to the locker room with 6:31 left in the third quarter and the Warriors trailing by six.

That Golden State were outscored 22-9 over the rest of the quarter and lost by 29 (134-105) presents compelling evidence that losing Thompson was ruinous.

And maybe, on this night, it was.

There are 78 games remaining this season, though, and Klay’s uncharacteristic outburst might be the stimulant the warriors need to shed the malaise that has hung over them in the three games since opening night.

“There was just a lack of intensity, physicality, whatever you want to call it,” coach Steve Kerr told reporters, referring to this game with an assessment that also could be applied to the previous two.

There they were again Tuesday night, giving up 72 first-half points to the Suns.

Not even the defense-averse teams under Hall of Fame coach Don Nelson ever surrendered 70 or more points over three consecutive first halves.

“The commitment to defense is not there,” Draymond Green said. “That’s something we have to be better at. It starts with me, and I’ll make sure we get there.

“But right now, we’re a decent offensive team and a bad defensive team.”

The defensive issues are across the board, most notably in transition, where teams are feasting. The Warriors allowed only 11 fast-break points in Phoenix but gave up 22 off turnovers. Opponents have scored 92 points off turnovers, an average of 23.0 per game.

Kerr acknowledged before opening night that conditioning was an issue and might remain one for a couple of weeks. It’s evident. Tired teams get sloppy with such fundamentals as offensive rebounding, transition defense and defending without fouling. The warriors have been guilty of all three, and they’ll get better.

But the lack of “intensity” – Kerr’s word – for a team defending its championship has been downright alarming.

Beneath that, Thompson over the past couple weeks has displayed clear signs of frustration. He lashed out at the guy who assigns ratings of players for NBA2K – and then apologized. He expressed visible irritation with a story that suggested he might retire when his contract ends in 2024.

What’s bothering Klay most of all might be his inability, so far, to respond with a volley of buckets.

Thompson shot 1-of-8 including and missed all five of his 3-pointers Tuesday night. He is shooting 35.5 percent from the field, 28.6 from distance. His identity is shooting, particularly from deep, and it’s failing him.

“He had to be patient last year for half a season to get ready for his moment to come back,” Stephen Curry told reporters in Phoenix. “He could just lock in on the process and what it takes to prepare himself for that.

“This year, I’m sure he had elevated expectations on what he could do.”

Thompson was eager to take the court this season but upon arrival at training camp was told he needed to take the slow road to his usual playing time. No player wants to hear the dreaded phrase “minutes restriction,” but that where he is and will be for another week or two.

Yeah, that can eat at the psyche of a proud player.

Booker happened to be the guy who brought enough swagger to get under Thompson’s temporarily sensitive skin. So, Klay let it out. It looked cathartic.

RELATED: Kerr not surprised by Klay’s competitive jawing with Booker

He’ll be better for it. Maybe by Thursday, when the Miami Heat visits Chase Center. Or maybe in a week. Thompson’s time will come—because it always does.

Meanwhile, his teammates, having witnessed his eruption, could benefit from adding a few sprinkles of salt to their disposition.