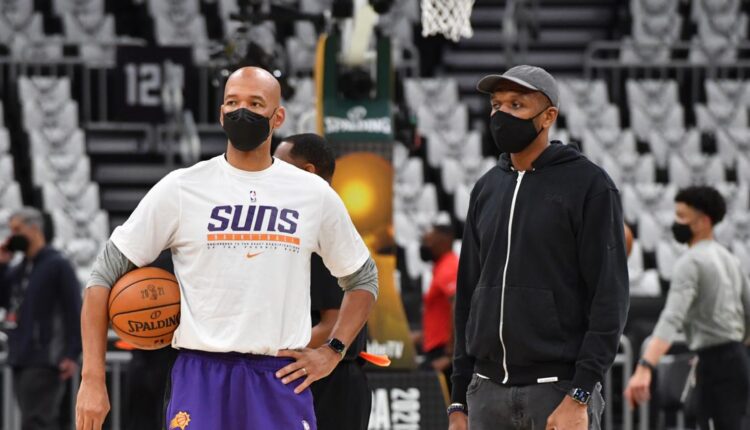 Know when to fold ’em

The Phoenix Suns (21-24) are incapable of making a deep playoff push as constructed, even when they are healthy, and they have no ability to address the glaring weaknesses that prevent them from going further.

power forward: The Sun’s rotation at this position is just bad. Either they’re small forwards playing out of position (Cameron Johnson, Torrey Craig), sitting at home and pouting (Jae Crowder), or are just not NBA talent (Ish Wainwright, Dario Saric). Johnson, in particular, gets severely injured every time the Suns try to consistently play him at power forward. He can’t rebound and he can’t defend the bigger, stronger guys. He’s not a long-term solution there. Unless the Suns address the situation here, they’re not going anywhere.

free throws: The Suns don’t get to the line much, and it’s their own fault. At one point during a recent loss, I saw that they were hitting 61.5% of their three pointers yet were down by 17. Then I looked at the FT difference: the Suns had on, their opponent had just under 20. There’s the difference. No one on the team is good at drawing contact. No one likes to draw contact. Ayton actively shies away from it. This problem isn’t going away, and it’s going to get worse in the playoffs when the refs call even less fouls on their opponents.

ChrisPaul: Father time finally caught up with The Point God. The sooner they realize that 37-year-old Chris Paul is never walking through the door again, the better. This is his worst season in the NBA. He can’t stay healthy, and he’s no longer worth the $30 million dollars per year he’s being paid.

Deandre Ayton: He’s a traditional big man in a league where stretch 4/5s are the new meta. He doesn’t draw contact, and he’s zoning out as the Suns get blasted night after night. He’s making $30 million a year, but it’s arguable whether he’s earning it right now. But, because of his salary, and the holes in his game, the Suns will struggle to make it much further.

injuries: Even when some of the players get back, that doesn’t mean they’ll be in game shape. We saw last year how Cam Johnson couldn’t hit the broad side of a barn after he came back from injury last year. There’s going to be a lot of guys coming back, and some more ugly basketball as they try to play their way into shape and getting back into the flow. A lot more L’s are coming, and if the Suns do make the playoffs, it’s probably going to be as a play in team that gets obliterated in the first round.

The problem is, the Suns are powerless to fix ANY of these issues because of the upcoming sale of the team, and the fact that any potential trade that might improve the Suns enough to be contenders (ie for a starting caliber power forward) needs to be signed off on by Robert Sarver. Brian Windhorst of ESPN reports that this is making it much more difficult for the Suns to conduct any trades.

On top of that, all the Suns have of interest are expirings of players no one wants, or are crucial to the team today. Jae Crowder absolutely trashed his own value with other owners by refusing to play for what should have been a very good team. Saric appears to be done in the league. Torrey Craig is needed as a back up SF/PF, and worth the $5 million dollar salary he’s being paid. No one’s taking Cam Johnson when he can’t stay healthy and coming up on being an RFA. Cam Payne is the only playable back-up PG the Suns have. Landry Shamet is a marginal NBA talent making $10 million per year for the next three years and has negative value.

The Suns are in salary cap hell, with some bad contracts (Shamet) and some contracts for players who are not worth what they’re being paid (Paul, Ayton). Even if the Suns let all their expirings walk, they still have 6 players under contract and remain well over the cap at $137 million. This is a team that’s not going anywhere this year, and will still have the same lethal deficiencies next year, none of which can be addressed until after the trade deadline because of the ongoing sale of the team.

The one thing that could change this entire gloomy forecast of two straight mediocre, pointless play-in seasons is a 7’4” prospect by the name of Victor Wembanyama. It’s better to have some chance at improvement than zero. The Suns can’t make a trade that fixes their problems this year. They’re going to struggle in the offseason with the fact that the assets they might want to move are worth less than what they’re being paid, and James Jones has a history of losing trades and failing to develop talent.

Now the cupboard is bare on the bench.

Tank is such an ugly word. Let’s call it maximizing the odds of future success. It will become apparent to CP3 and Booker when they get back that things still look brutal for the team, and that this season is a write-off. They’ll want to press as hard as they can, but even CP3 realized that Oklahoma City wasn’t going to get much further while he was at the helm. Ditto with the Suns after this season concludes.

The Suns aren’t winning a title this year. They have no choice in the matter. They do, however, have a choice as to whether they get a shot at Wembanyama. When you know your hand is a loser, and no one is buying a bluff, it’s time to cut your losses. You got to know when to fold ’em. All you can do is be ready to play the next hand.