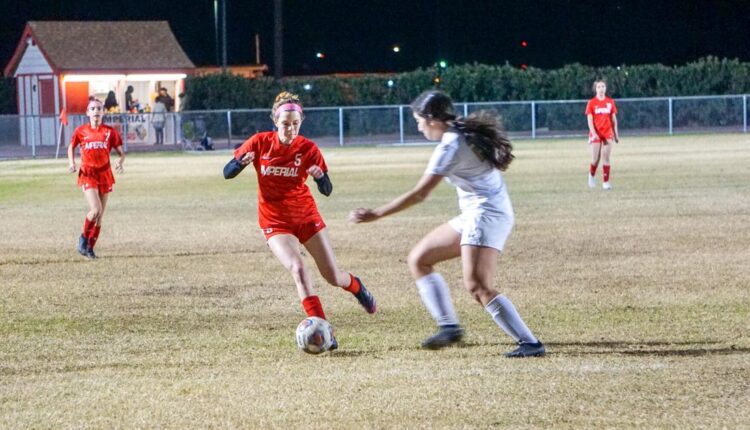 IMPERIAL — The Imperial Tigers girls soccer team stepped back onto the pitch on December 8 for a match up against the Yuma Catholic Shamrocks that resulted in a match up in the lady Tigers favor, 8-0.

The action began just two minutes into the match with the Lady Tigers pushing forward for an offensive attack that resulted in an assist by Kaitlin Tucker to Alexis Uhri. Uhri managed to work around a Shamrock defender and line up a shot that landed in the back of the goal, 1-0.

Moving forward, the Tigers continued to control the possession and created chances that all led to their next goal in the 23rd minute. On the possession, the Tigers Viviana Espino dribbled the ball into their opponent’s side of the field for a chance that fell to Mykenzie Wright, who controlled the ball and lined up her shot for a well-placed shot that zipped past the goalkeeper, 2- 0

“I feel every person’s greatest quality on this team is their work ethic and with the motivation we have, we are able to play a disciplined game that has allowed us to be successful this far in the season,” said Espino.

Moving through the remainder of the first half, the Imperial Tigers mustered up two additional goals from Alexis Uhri and Jimena Valdovinos, 4-0.

Kicking off the second half of play, the Tigers picked up right where they left off with an assist from Espino for a shot on goal by Miroslava Gonzalez-Lopez, 5-0.

Moving through the second half, the Lady Tigers continued to hold their lines to force offensive situations till they found their next goal in the 11th-minute period of the match. The assist came from Valdovinos for a connection to Uhri, for a lobbed shot that just escaped the keeper for a goal, 6-0.

Shortly after, the Tigers managed to control the ball on their side of the field for a break downfield by Uhri, who passed the ball to Wright for an undefended shot on goal that sailed into the back of the goal, 7-0.

Lady Tiger Viviana Espino gets three assists and one goal to help shut out the Yuma Catholic Shamrocks.

The final goal of the night came from a solo run by Espino who took her shot near the penalty box for a shot on goal that bent into the left corner of the goal, 8-0.

“This win tonight showed our team’s dedication as well as the effort we put in at practice every week so we can come out and show everyone the passion we have for this sport,” said Mariah Moore.