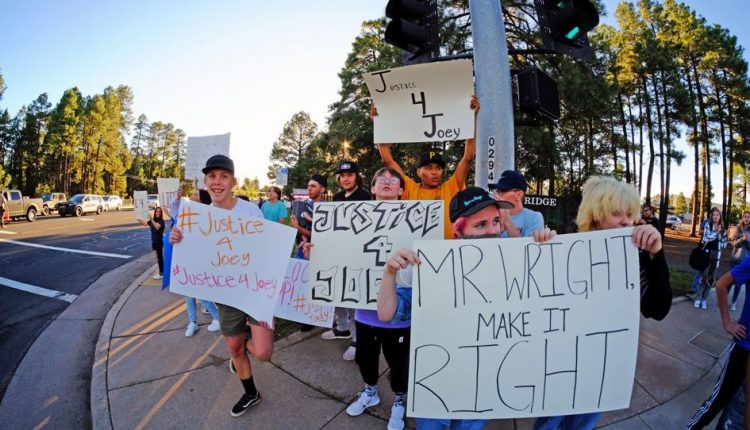 PINETOP-LAKESIDE – According to a press release from the Show Low Police, 19-year-old Joey Jaurique was allegedly lured to Show Low Lake by a 17-year-old girl around 10 p.m. on Aug. 8 and was badly beaten by two teenagers. whose age is indicated by the police as 16 and 17.

Jaurique was flown to a Valley hospital and had a six-hour face and jaw operation. He’s recovering in Lakeside, social media reports say.

Now Joey Jaurique had been beaten with an injunction against harassment by a boy’s parents, and on behalf of the boy who claimed Jaurique had broken the boy’s face in the past and the boy on the 8th. That same day, Jaurique was allegedly assaulted .

The three teenage suspects in Jaurique’s beatings have not been named and none have been charged (at least as adults), but this new development against Jaurique is strange to say the least.

For better readability it should be noted that a common Spanish pronunciation of the name “Jaurique” is “HOW ree kee”. In fact, according to Navajo County Superior Court records, in May 2018 a Krystal Chastity Jaurique-Caso appeared in a name change case involving a minor, Joey Jaurique-Fernandez, whose date of birth on court records is the same month and year as Joey Jaurique .

On August 10, the Pinetop Lakeside Justice Court ordered Jaurique to prohibit any contact with a teenage man, whose name had been removed from court records, and to deny his home, work, Blue Ridge High School, and family Pets. In addition, Jaurique is prohibited from possession of firearms for the duration of the injunction, usually one year after the injunction is served on the defendant. Since the protected person in this case is a minor, an adult, possibly his mother, has sworn in the application, which the judge has granted.

There are three types of protection orders in Arizona, sometimes referred to as “peace bonds,” which are where a court does not order person-to-person contact. Failure to do so is a misdemeanor and punishable by six months’ imprisonment, three years probation and / or a fine of $ 2,500. A protection order applies to people who are related or have lived together, who had a “romantic or sexual relationship” or were simply dated. A protection arrangement is relatively easy to come by. A plaintiff in protection proceedings only has to swear that domestic violence “occurred” against the petitioner or could exist. Acts of domestic violence, on the other hand, are quite broad in the law and encompass many more acts than those that naturally spring to mind when one hears the term. Domestic violence, for example, can include bodily harm with and without injuries, but it can also include criminal harm, disorderly behavior (also known as disturbing the peace), various sex crimes, and even trespassing. The cost of delivering the order will not be charged to the claimant.

On the other hand, an injunction against harassment, like the one against Jaurique, affects people who are not blood relatives or married and have never lived together. And a single harassment is not enough to obtain an injunction; otherwise, someone freaked out in traffic or insulted by a fellow buyer could run to the nearest courthouse and seek a court order if the perpetrator could be identified. Rather, there must have been a “series of acts” that serve to “alert, annoy or harass” someone and, according to the statue, serve “no legitimate purpose”. The plaintiff bears the costs of serving the injunction, but a court may waive this.

Finally, the third type is called an injunction against harassment in the workplace, which does not require a series of acts, but this topic is outside the scope of this article.

In this case, the injunction was served on Jaurique on August 18th. According to the petition, the plaintiff swore under oath that Jaurique attacked the underage boy on school grounds in March, causing “multiple facial fractures and stitches”. The plaintiff also alleged that on the following August 8th, “Joey made several threats against (the minor) and there were other arguments (sic) Joey had a gun. (Minor) was forced to defend himself. Joey was high on Xanex. (sic) We (plaintiffs) fear for life (minors). “

As mentioned earlier, it’s noteworthy that the August 8th date is the exact same date that Jaurique was allegedly beaten up on the Low Lake show. There is some evidence (see below) but no confirmation that any of the minors who allegedly assaulted Jaurique are linked to the injunction against Jaurique.

Courts have the option to schedule a hearing before issuing a protection order. But in situations where a plaintiff has sworn that they were firearms, it seems wise to issue one without hearing from the other side. It is known that judges prefer to hear the full story before making a decision, but issuing an order without hearing the other side is rare in the law but allowed in these types of cases. However, the defendant has the right to appeal the matter at an oral hearing, and Jaurique has tried to do so.

But Jaurique’s request came from one of his parents, and Jaurique is an adult. If the parent is not a licensed attorney or a court-appointed legal guardian, the parent is not authorized to do so. This irregularity did not go unnoticed by the plaintiff’s lawyer, who has since asked the court to cancel the hearing. Parent also filed a motion on behalf of Jaurique, requesting that Jaurique be allowed to appear at the hearing by telephone because “He was very emotionally and psychologically harmed by the physical (sic) attack by (the plaintiff’s son) and his friend. His mouth is wired from this attack and (sic) Joey is severely traumatized. Please consider – thank you. ”By the editorial deadline, the court had not decided on any of the motions.

This is not a criminal case; Rather, protection and restraints against harassment are civil in nature, and to win, a plaintiff must prove to the judge (not a jury) that it is “more likely” that things happened as the plaintiff claims. The hearing on this case is scheduled for September 23rd.