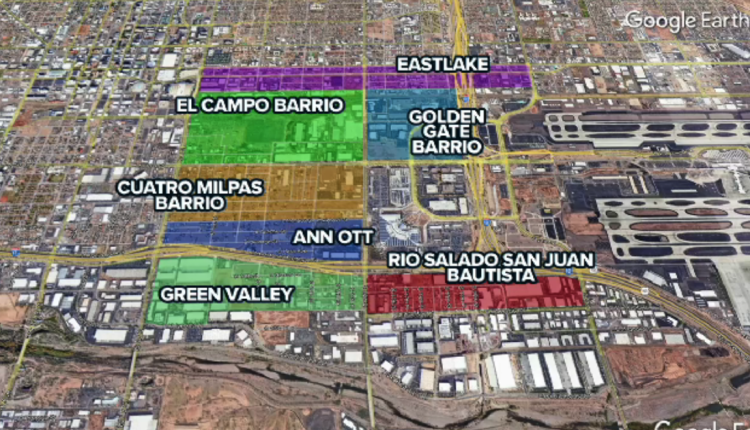 Despite the signs, homes still stood in the areas. They are checked throughout these neighborhoods, serving as a reminder of what used to be here.

They are some of the oldest established neighborhoods.

Michael Valdez is a former resident of the Cuatro Milpas neighborhood. He’s dedicated decades to preserving the history of these neighborhoods, also known as barrios.

But now, homes are scattered, leaving minimal housing, if any, at all.

The forced and voluntary relocation of the residents in the barrios left them a shell of what they once were, but decades later, there is work being done to breathe new life into these neighborhoods.

Courtney Carter is the City of Phoenix Economic Development Program Manager. He said, “The Land Reuse Project intends to answer the question, what does the aviation department in the City of Phoenix do with land that was acquired over the course of about a decade and a half?”

Carter is part of a task force, along with Valdez, that was put together to come up with solutions for the empty lots and address current and former residents’ biggest issues.

The areas are zoned for commercial use so new homes aren’t possible. Carter said the top ask from residents left behind is to help in the restoration of their older homes. Carter says the city is working to help in the ways the allocated funds allow.

So, for now, it’s about revitalizing the neighborhoods with businesses that will be useful to the community and marking areas that are of cultural significance to the barrios.

In the official Land Reuse Project documents are marked renderings of what the cultural corridor could look like including the changes that could happen at Lewis Park in Cuatro Milpas and Santa Rita space in Campito, to name a few.

“We’re really wanting to make sure that the community does not feel left behind, but that they’re leading, they’re co-leading the effort to make sure we build and revitalize their neighborhoods,” Carter said.

Much of the timeline will depend on funds and ABC15 confirmed that City of Phoenix officials plan to apply for a federal grant called Reconnecting Communities.

While the entire project could take months and even years to complete, what drivers will see now if they make their way through some of these neighborhoods is the unique way current and former residents honor those who called the now empty lots, home.

“Someone will pass away, and then they’ll put like a memorial at that house, right? And then people will come back to that memorial every year and celebrate it,” Valdez commented.

For a look at the Land Reuse Project documents click here.

What we didn’t know about labor and birth in 1864